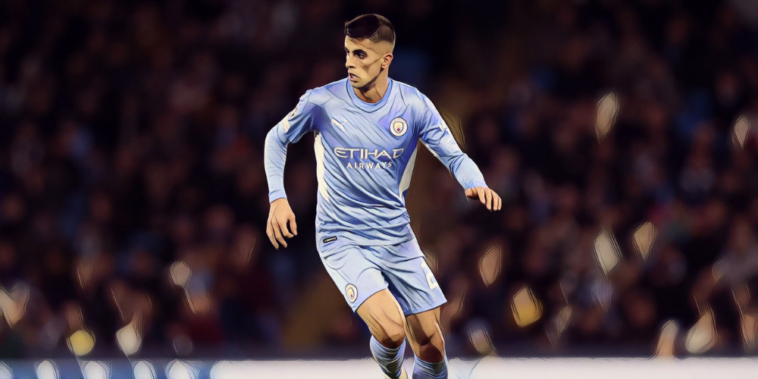 Manchester City defender Joao Cancelo starred in the last round of UCL games as Pep Guardiola’s men put five past Belgian side Club Brugge, with the Portugal international registering a hat-trick of assists to join an elite list of players to have achieved that feat.

The 27-year-old’s treble of assists saw him become just the eighth English-based player to have achieved the feat in the Champions League era.

Here’s a look at the eight stars are to have registered three or more assists in a Champions League game for for an English club:

Dwight Yorke arrived at Manchester United in the summer of 1998 after a prolific stint with top-flight rivals Aston Villa and would go on to play an integral role in the club’s remarkable treble success at the end of his debut campaign, netting 29 goals in all competitions.

A much-loved figure during his time at Old Trafford, the Trinidad and Tobago international is best remembered for his telepathic relationship with fellow forward Andy Cole, the two men forging an immense partnership to help fire Sir Alex Ferguson’s men to glory.

It was during that sensational first season that the lethal marksman bagged his hat-trick of assists, laying on three and also scoring in a 6-2 demolition of Danish side Brondby, the game coming in the early stages of the club’s eventual European triumph.

Juan Sebastian Veron was the second player to have registered three Champions League assists, having produced a stunning midfield display during a 3-2 second-leg win over Deportivo La Coruna, as Manchester United reached the last four in 2001/02.

That tally included an outrageous outside-of-the-boot pass for Ole Gunnar Solskjaer, having already set up the Norwegian with a curling free-kick, with the £28m man often saving his best performances for European competition after struggling to adapt to the fast-paced nature of the Premier League.

While often derided as an expensive flop, such moments of quality highlighted the Argentine’s undoubted talent, although form and fitness issues hampered his progress and he was shipped off to Chelsea in 2003 after just two seasons at Old Trafford.

The third and final Man United player to feature on this list, Ryan Giggs reigns supreme as the only English-based player to have recorded four assists in a Champions League game, having done so in the famed 7-1 win over AS Roma during the 2006/07 campaign.

Having emerged as a flying winger in his youth, the one-club man transitioned into more of a midfield playmaker in his latter years, with the Welshman ending his lengthy top-flight career with an all-time record tally of 162 Premier League assists – a feat that appears unlikely to be bettered.

Giggs also leads the way with 13 league titles, while he was integral to the club’s European triumphs in both 1999 and 2008, before calling time on his exceptional career at the end of the 2013/14 season after more than two decades at the top.

A cult Arsenal figure, Andrey Arshavin’s impact at the Emirates may have been fleeting, yet he certainly made his mark in his early Gunners career, notably netting four in a barnstorming 4-4 draw with Liverpool at Anfield in April 2009.

The Russian forward’s arrival in the January transfer window had meant he was unavailable to feature for Arsene Wenger’s side in the Champions League knockout stages that season due to being cup-tied, although he more than made up for that the following season, bagging three assists in a 4-1 group stage victory over AZ Alkmaar.

In truth, such displays were far too infrequent as he slowly faded from view across the following seasons, returning to former club Zenit St Petersburg in 2012, before ending his career in 2018 following stints at Kuban Krasnador and Kazakhstan side Kairat.

Liverpool’s ever-dependable James Milner was the next man to bag three assists in a Champions League game, having done so as a first-half substitute in a brutal 7-0 thrashing of Spartak Moscow – a fixture which also saw Philippe Coutinho net a hat-trick as the Reds qualified for the knockout stages for the first time since 2009.

Jurgen Klopp’s emerging side would go on to lose to Real Madrid in the 2018 final, before bouncing back to clinch a sixth European Cup the following season with victory over Tottenham Hotspur in Madrid, with Milner featuring as a second-half substitute.

The Englishman formed part of the side that secured a first league title in 30 years in 2019/20 and remains a valued member of the squad at the age of 35, with his free transfer arrival from Manchester City having been an astute signing, such has been his consistency and priceless versatility.

Leroy Sane returned to haunt his former club Schalke with a sensational Champions League display in 2019, with the German netting once and bagging three assists as Man City ran out comfortable 7-0 winners at the Etihad to secure a 10-2 aggregate victory in the last-16.

Sane signed for City from the Bundesliga side in 2016 and featured heavily over the next few seasons, notably netting ten times in 32 league appearances during the club’s rampant title success in the 2017/18 campaign, as Pep Guardiola’s men became the first side to reach the 100 point landmark.

Ten more goals and a second league title followed the year after, before an ACL injury ruled the winger out of almost the entire 2019/20 campaign, with the 25-year-old later joining Bayern Munich in the summer of 2020.

Kevin De Bruyne’s hat-trick of assists came during that remarkable Champions League, quarter-final clash at the Etihad back in 2019, with his haul ultimately proving in vain as City crashed out of the competition in dramatic fashion.

With Tottenham holding a 1-0 lead from the first leg, the two sides came flying out the traps in a breathless opening, with the hosts racing into a 3-2 second-leg lead inside just 21 minutes, with the Belgian playmaker providing the assists for Raheem Sterling’s brace.

A fourth from Sergio Aguero – and a third De Bruyne assist – looked to have put Guardiola’s men in the ascendency, before a controversial Fernando Llorente goal handed Spurs an away goal advantage, with the home side eventually bowing out after being denied a stoppage-time winner for offside, following a VAR review.

The 30-year-old is no stranger to an assist, of course, as he is currently the joint-record holder for most assists in a single Premier League season, alongside Thierry Henry, after registering 20 during the 2019/20 campaign.

In an era of progressive and creative full-backs, Joao Cancelo is one of Europe’s most influential defenders, having developed into something of a playmaker from his left-back berth.

While he initially struggled to live up to his hefty £60m price tag following his switch from Juventus, the versatile Portugal international emerged as a key player under Guardiola last season and was integral to the club’s title success, with that form continuing into the current campaign.

Joao Cancelo is having himself a week:

With Kyle Walker the first-choice at right-back, Cancelo has had to feature predominantly on the other flank throughout his City career, providing a brilliant solution to a previous problem position.

Cancelo has been in fine form in recent weeks, bagging three assists during the 4-1 win over Club Brugge in Europe, before earning plaudits for his starring role in the Manchester derby triumph at Old Trafford, creating both goals in City’s 2-0 win.