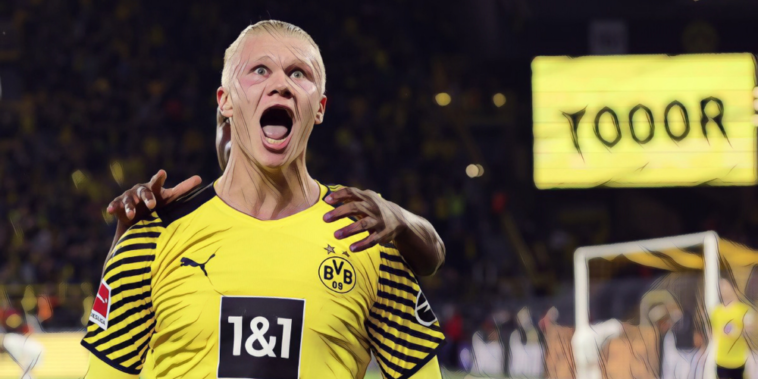 Erling Haaland’s exciting emergence made it quickly clear that the Norwegian was a special talent.

Since leaving his homeland to join Red Bull Salzburg the forward has had a meteoric rise, settling records tumbling during spells with the Austrian side and Borussia Dortmund.

Haaland has scored a staggering 115 goals in 116 club games since first moving to Salzburg, performances which persuaded Manchester City to bring the 22-year-old to the Premier League.

The forward will now hope to continue his record-breaking feats in English football and on the evidence of his career to date, few milestones appear out of his reach. We’ve decided to look at some of the most impressive records and achievements Haaland has claimed in his career so far.

Haaland first emerged in the consciousness of the casual fan after marking his first appearance in the Champions League with a hat-trick, scoring three times as Red Bull Salzburg thrashed Genk 6-2 in September 2019.

2019: When Erling Haaland became the first teenager since Wayne Rooney (2004) to score a hat-trick on his Champions League debut ⚽️⚽️⚽️@ErlingHaaland | @RedBullSalzburg | #UCL pic.twitter.com/RMpLI1o1qD

Haaland is one of just ten players to have scored a hat-trick in their first Champions League appearance, while at 19 years and 58 days he was the second youngest to have achieved the feat, behind only Wayne Rooney (18 years, 340 days).

One of four players to score in first five UCL games

Haaland became the third player to score in each of his first five games in the Champions League, having made a stunning start to his career among Europe’s elite.

He followed Alessandro del Piero and Diego Costa in achieving the feat, before Sebastien Haller equalled the achievement during the 2021/22 season.

None, however, have done so at a younger age than Haaland.

Haaland’s prolific record on the Champions League stage continued and the Norwegian became the fastest footballer to reach 20 goals in the competition.

He incredibly achieved the feat in just 14 games, obliterating the previous record held by Harry Kane.

Haaland scored his 20th goal in the competition aged 20 years and 231 days, becoming the first player to have reached the milestone before their 21st birthday.

Haaland’s incredible record in European competition is unmatched when assessed with rivals both past and present, having scored 24 goals in his first 20 appearances in continental club competition.

Even Kylian Mbappe, a player of similar precocious gifts and viewed alongside Haaland as the best young player in world football, netted just half of Haaland’s haul with 12 goals.

Further back, Real Madrid icons Ferenc Puskás and Alfredo Di Stéfano had scored 19 and 21 goals respectively after 20 European games, while Gerd Muller had hit 15 at the same stage.

No player can better Haaland’s minutes per goal ratio in the Champions League. Among every player to have scored a minimum of 15 goals in the competition, his average of a goal every 64 minutes is far superior to any rival.

Haaland scored 62 goals in just 69 league appearances across his two-and-a-half seasons at Borussia Dortmund, with a debut hat-trick off the bench against Augsburg setting the tone for his spell with the club.

Haaland scored on average every 84 minutes in the league for Dortmund, the best minute per goal ratio in Bundesliga history.

How many goals will Erling Haaland score in the Premier League next season? ⚽️ pic.twitter.com/CtQNHO8fDp

That record leaves him ahead of Robert Lewandowski (100 minutes) and Pierre-Emerick Aubameyang (116 minutes), while Gerd Muller, the league’s all-time record goalscorer, averaged a goal every 105 minutes in the division.