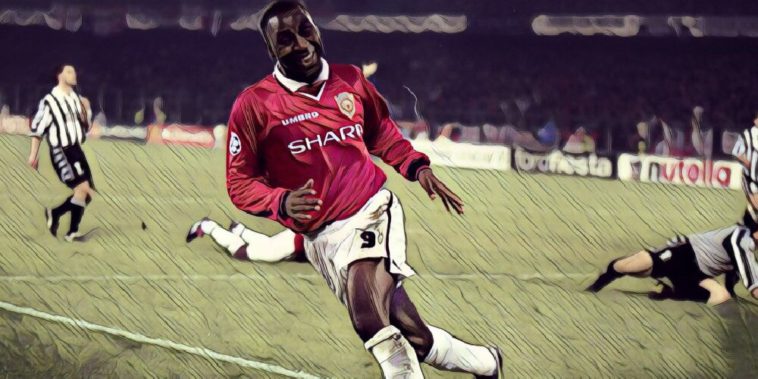 Andy Cole has said that one game in Manchester United’s run to claiming the treble in 1999 still gives him the shivers, and it wasn’t the final.

Having already claimed a Premier League and FA Cup double, United made it a treble when they won the European Cup for just the second time in their history after one of the most epic turnaround’s in football history.

With United trailing 1-0 to Bayern Munich going into extra time, Teddy Sheringham’s miscued strike found its way into the bottom corner of the net, only before Ole Gunnar Solskjaer to grab the most dramatic of winners in the 93rd minute.

For Cole however, it was the semi-final win over Juventus in the Stadio delle Alpi that gets the hairs on the back of his neck standing to attention.

As happened so often in that season, United made it difficult for themselves, and were 2-0 down after just 11 minutes after a brace from Italy international Filipo Inzaghi.

Roy Keane got the Red Devils back into the game with a fine glancing header from a corner, before Cole played over a delicious pass to his strike partner Dwight Yorke, who smartly headed past Angelo Peruzzi to put United ahead on away goals after 34 minutes.

There were some scares for United at the other end, especially when Inzaghi thought he had completed his hat-trick, only to see it chalked off for being offside.

Then, with seven minutes to play, Cole scored the third and decisive goal to send Alex Ferguson’s team through to the final against Bayern, and the former United number 9 still has fond memories of that epic night in Turin.

“That game still sends shivers down my spine,” Cole told The Telegraph. “To this day I can’t comprehend what we did.

“I remember coming into the dressing room after the game and I think I was having half a moan about something stupid to Yorkie but I didn’t actually understand what we had just done. We went into overdrive.”

Speaking about his seemingly telepathic partnership with Dwight Yorke, Cole revealed that the pair didn’t even used to train together, and it was actually the influence of his former Newcastle teammate Peter Beardsley that helped him become the striker he was.

“People ask, ‘How did it work?’ You don’t know how it worked – it just worked,” Cole said. “Yorkie and I were never even on the same team in training – it’d be England versus the Rest of the World in small sided games!

“I always remember Peter [Beardlsey] used to say to me: ‘Just stand there.’ I’d look round like an idiot and say, ‘I can’t just stand there’ but as I got older I understood what he was saying. You can create space just by standing still. I learnt all these things from him at Newcastle so when it came together with Dwight I drew on that knowledge and it just all knitted so well.”

Can you name every member of the squad to be involved in Manchester United’s treble season? Take our quiz!