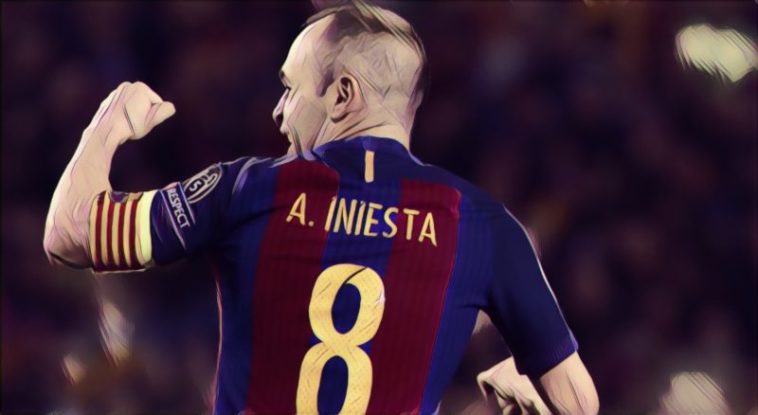 Andres Iniesta is undoubtedly one of the greatest midfielders the game of football has ever seen.

The unassuming genius was an integral part of the Barcelona and Spain sides that reshaped how the beautiful game has played over the last 15 years.

“Iniesta doesn’t dye his hair, he doesn’t wear earrings and he hasn’t got any tattoos. Maybe that makes him unattractive to the media but he is the best.” Pep Guardiola.

“The press often ask me about whether Messi or Ronaldo is the best, but for me something is very clear: Andres Iniesta is the number one. He is able to do even more difficult things on the pitch. He is magic with the ball and so influential.” David Silva.

“Iniesta is easily Spain’s most complete player. He has everything. Playing alongside him is very easy.” Xavi.

“Andrés and I are similar in that we both use our bodies a lot, to avoid opponents. But he has something that always amazes me. There’s always a moment when you think you’re going to catch him, when you think you’re going to get the ball off him, but you can’t. He’s not especially quick, but he has that ability to always get away from you, which comes from his technique.” Lionel Messi.

“Magic from Iniesta. He doesn’t pull rabbits out of his hat, he pulls out big, beautiful peacocks.” Ray Hudson.

“Iniesta is the boyfriend that every mother wants her daughter to have. The figures over his career tell you all you need to know. He is a magical player. There are few players in the world that can compare to him.” Sergio Ramos.

“He reminds me of myself.” Zinedine Zidane.

“The one who plays this game the best is Iniesta: he knows exactly when to go forward and when to drop back. He picks the right moment to do everything: when to dribble, when to speed things up and when to slow things down. And I think that’s the only thing that can’t be taught or bought. You can learn how to shoot and how to control the ball, but being aware of everything that’s happening out on the pitch – that’s something you’re either born with or you’re not.” Juan Roman Riquelme.

“He’s fantastic. He makes the team work. The way he finds passes, his movement and ability to create space is incredible. He’s so important for Barcelona.” Sir Alex Ferguson.

“He is one of the best players in the world and I’m not just talking about my era. I’m talking about in the history of the game” Petr Cech.

“When he has the ball, it’s like everything else stops – like the camera is going in slow motion.” Fernando Torres.

“As a professional, as a person, and as a player, I think he’s fantastic. It’s like he’s dancing the tango. [ . . . ] I just love how he plays football so elegantly. To me, Andres is Don Andres.” Dani Alves.

“Iniesta’s the most inventive player in Spanish football at the moment. He’s like Harry Potter. One, two, three and whoosh… he’s past the player. It’s like he has a magic wand.” Luis Enrique.

“When I see him play these days, he reminds me of Xavi. He was always a top quality player. He started very young with us, and it’s crazy to see how he has gone on to make so much history.” Ronaldinho.

“He’s creative, he runs with the ball, he’s got a brilliant final pass and with each passing year he’s become more of a goalscorer as well as a provider. He’s a source of immense confidence for us. During matches you can see him taking on more and more responsibility and in attack he’s the team’s reference point.” Cesc Fabregas.

“Barcelona are a brilliant team and in my opinion Andres Iniesta is the best player in the world.” Wayne Rooney.

“When I said Iniesta was the world’s best, you laughed. Now you can see I’m right.” Samual Eto’o.

“Andrés is a player who does his work in a quiet way, without noise, and people do not note it. I already knew before I came here that he is a footballer, who when he is on the pitch, makes Barcelona play better. I cannot believe he is not in the list of candidates for the Balon D’Or” Thierry Henry.

“He is an example of a La Masia player. Technically he is unbelievable.” Gerard Pique.

Read – Xavi – 10 of the best quotes about the Barcelona legend