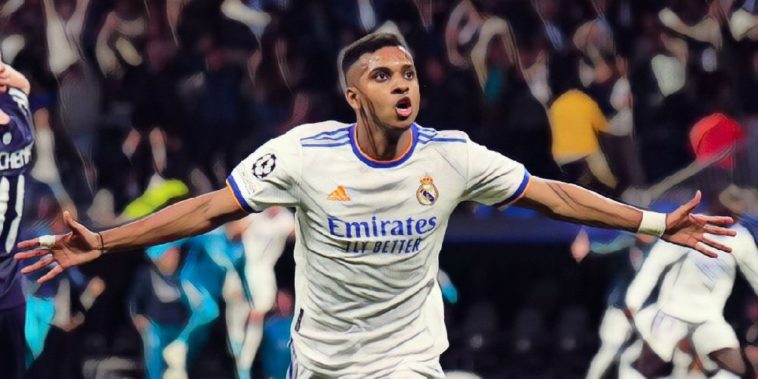 Real Madrid produced a late, late comeback to set up a repeat of the 2017/18 Champions League final following a 3-1 victory against Manchester City.

Eight days ago, fans were treated to a seven-goal thriller, with Manchester City having looked like building a large first-leg advantage after a blistering start, only before allowing a Karim Benzema inspired Real Madrid back into the tie to leave it finely poised.

The second-leg in the Bernabeu was a much more cautious and tentative affair compared to what had gone on at the Etihad, with Man City looking happy to sit a little deeper in a bid to protect their aggregate lead.

Real Madrid, in need of at least one goal, started the second-half with a little more attacking impetus, with Vinicius Jr looking a threat for the newly crowned Spanish champions.

However, with 17 minutes to play, Ilkay Gundogan found Bernardo Silva in acres of space in midfield before the Portuguese went on driving towards the edge of the box before laying it to Riyad Mahrez. The Algerian made no mistake as he fired beyond Thibaut Courtois with a powerful, first-time strike.

Substitute Jack Grealish had two late chances to extend his side’s lead, the £100m man seeing one cleared off the line while one deflected narrowly wide.

Real Madrid had looked down and out in their quarter-final tie against Chelsea before digging deep to progress, and the 13 time European Cup winners would score with what was their first shot on target of the game in the 90th minute, Karim Benzema cutting the ball back to substitute Rodrygo who got in front of his man and poked the ball home to give his side a glimmer of hope.

Incredibly though, the Spanish side scored again just 88 seconds later, Rodrygo netting his second of the game as he met Dani Carvajal’s delivery from the right to despatch a wonderful header to send the game to extra time.

Three of them have been against the Reds. 🍿 pic.twitter.com/4cAvqw0qqC

Three minutes into the added period and Carlo Ancelotti’s side would be awarded a penalty after Benzema was brought down in the box by Ruben Dias. The Frenchman had despatched a panenka from the spot in the first leg, and this time he stepped up and calmly sent Ederson the wrong way to put his side ahead on aggregate for the first time in over 180 minutes.

The English league leaders were unable to muster a comeback of their own as Real Madrid’s quest of landing a record-extending 14th European Cup continued, with Carlo Ancelotti reaching a record fifth Champions League final, and the former Chelsea and Everton boss said he never felt like his side were beaten, despite being minutes from elimination.

“I cannot say we are used to living this kind of life, but what happened tonight it happened against Chelsea and also against PSG,” he told BT Sport. “If you have to say why, it is the history of this club that helps us to keep going when it seems that we are gone.

“The game was close to finished and we managed to find the last energy we had. We played a good game against a strong rival. When we are able to equalise we had a psychological advantage in extra-time.

“I have no time to think about this [losing the game]. It was difficult as City had control of the game but the last opportunity we were able to go to extra-time.

“I am happy to be there in the final, in Paris against another great rival. We are used to it. It will be a fantastic game for football.”

The final against Liverpool is in Paris on May 28th.