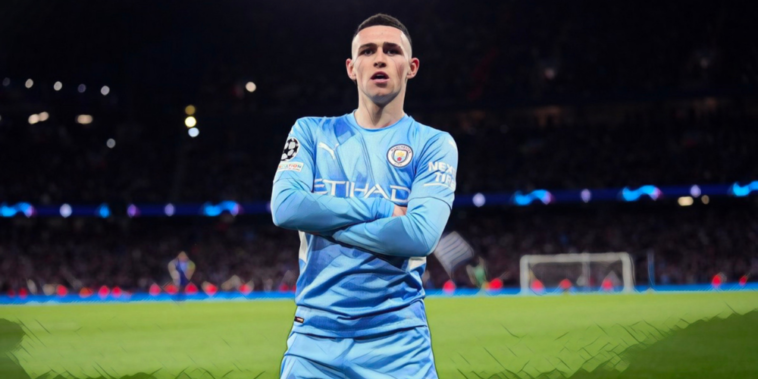 Phil Foden joined an exclusive group of English players to have scored in a Champions League semi-final, after the Manchester City forward netted in his side’s 4-3 win over Real Madrid at the Etihad.

The 21-year-old’s goal was his ninth overall in the Champions League, with no English player having scored more goals in the competition aged 21 or under (also Wayne Rooney).

Foden will be hoping to make another valuable contribution ahead of the return and ahead of the clash we’ve looked back at the eight Englishmen to score semi-final goals in the Champions League era.

Cole scored five goals during the club’s run to Champions League success, including the clincher in the semi-final comeback win over Juventus in Turin.

After a first leg draw at Old Trafford, United trailed 2-0 inside 11 minutes at the Stadio delle Alpi as Filippo Inzaghi’s goal put the Italians in control.

Roy Keane and Dwight Yorke replied to put Sir Alex Ferguson’s team ahead on away goals, before Cole completed the comeback – and secured a final showdown with Bayern Munich – with a late third to make it 3-2 and spark wild celebrations.

Steve McManaman became one of English football’s great exports after leaving Liverpool for Real Madrid, twice winning the Champions League during a successful spell in Spain.

Having scored a stunning winner in the 2000 final against Valencia, the midfielder made another vital Champions League contribution with a semi-final goal two seasons later.

McManaman scored a stoppage-time second as Real Madrid beat Barcelona in an El Clasico showdown at the Camp Nou, before completing the job in the return to progress to the final.

Chelsea emerged as a force in Europe following Roman Abramovich’s takeover of the club, with the West London side’s first season since the billionaire’s investment leading to a Champions League semi-final.

Claudio Ranieri’s team came unstuck over two legs against surprise package Monaco, however, falling to a 3-1 defeat in the first leg at the Stade Louis II.

The Blues rallied in the return with goals from Jesper Gronkjaer and Frank Lampard putting them ahead on away goals, but a Monaco fightback saw Chelsea eliminated in the last four.

Chelsea reached at least the semi-finals in five out of six seasons between 2004 and 2009, including an all-Premier League showdown with Liverpool in 2006/07.

Liverpool had eliminated the Blues at the same stage two seasons earlier, with Luis Garcia scoring the only goal of the tie across two legs.

Their 2006/07 meeting was similarly tight, though Joe Cole handed Chelsea a first leg advantage after scoring the winner at Stamford Bridge.

It was not enough to seal progress, however, as Daniel Agger’s goal levelled the tie at Anfield and Liverpool moved into the final after a penalty shootout win on Merseyside.

Paul Scholes famously missed Manchester United’s Champions League final win in 1999, so the midfielder was more than a little determined to right those wrongs as the Red Devils faced Barcelona in 2007/08.

The two teams were separated by just one goal across the two legs, with Scholes’ special strike at Old Trafford booking his side’s place in the final.

The veteran midfielder started as United beat Chelsea in the first ever all-Premier League final in Moscow, winning a penalty shoot-out after a 1-1 draw at the Luzhniki Stadium.

Manchester United reached three finals in four seasons between 2008 and 2011, following that aforementioned success in Moscow with a pair of final defeats to Barcelona.

Wayne Rooney scored in the semi-finals as the Red Devils reached the latter of those finals in 2011, scoring the second in a 2-0 win at Schalke in the first meeting.

Rooney laid on the first goal for Ryan Giggs in Gelsenkirchen, before firing home a second just two minutes later to provide the Premier League side with a crucial first leg advantage.

Rooney then scored an equaliser in the final as United fell to a 3-1 defeat to Barcelona at Wembley, becoming one of just six Englishmen to have scored in club football’s biggest fixture.

Mason Mount played a pivotal role in Chelsea’s 2021 Champions League success, scoring in both the quarter-finals and semi-finals before setting up Kai Havert’z winner in the showpiece.

After a 1-1 draw in the first leg at Real Madrid, Chelsea overpowered their Spanish opponents in the return with Mount scoring the second in a 2-0 win at Stamford Bridge.

Phil Foden joined this exclusive list of Englishmen after netting in City’s enthralling win over Real Madrid last week, with the 21-year-old heading home his side’s third in pulsating clash at the Etihad.

Pep Guardiola’s side dominated but the spirited Spaniards ensured the tie remains alive, after the full-time whistle blew with City winning 4-3.

Foden has been a vital performer for the Premier League champions in Europe this season, providing the decisive assist in the quarter-final win over Atletico Madrid before a star showing against their cross-town rivals.

He will be hoping for another big performance in the Bernabeu this evening as City look to make it back-to-back final appearances.