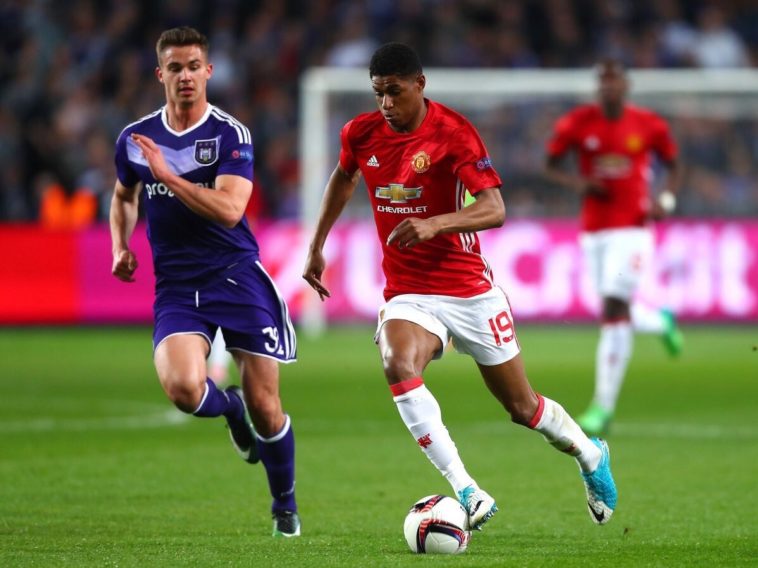 Manchester United were pegged back with less than five minutes to play as they drew the first leg of their Europa League Quarter Final tie against Anderlecht.

Henrikh Mkhitaryan gave United a first half lead before a Leander Dendoncker bullet header got the hosts on terms late on.

Anderlecht started the game brightly, clearly had a plan to rattle United early on.

After just four minutes, the hosts had a good chance. Dendonker squared the ball to Bruno, who completely missed the ball to relieve a dangerous situation for United. United had some decent little openings in the early exchanges but were unable to find the final ball, but it was the hosts who looked the most dangerous early on. They even had the ball in the back of the net, but it was rightly ruled out for offside.

This seemed to spark United into life. A good cross from left by Rashford was met by Zlatan Ibrahimovic. The Swedes close range effort was blocked by the keeper. The ball dropped to Jesse Lingard who thumped the ball against the post from a tight angle.

In the 27th minute, the ball was played over the top to a busy and energetic Marcus Rashford. The youngster was crowded out of the ball, which fell to Mkhitaryan, but the Armenians strike was blocked

Mkhitaryan, who was playing in a central position, was involved again. His pass put Jesse Lingard through on goal in a good position, but he was once again closed down quickly, and his shot was blocked by Mbodji.

Then in the 37th minute, United were ahead. The ball came from Pogba into Zlatan Ibrahimovic who played it first time out to Valencia out wide. The Ecuadorean put in a delicious first time cross into the Anderlecht box. Marcus Rashford arrived in the area and struck the ball first time but his shot was well saved by Ruben. The goalkeeper got a good strong hand to it, but Henrikh Mkhitaryan followed in to tuck the ball into the Anderlecht goal from a tight angle.

It was a well worked goal from United with some slick, one touch, pass-and-move play. A move deserving of a goal and reward for their good play. It was also the fourth goal Mkhitaryan had scored in the Europa League away from home this season, after scoring against FC Rostov, Zorya Luhansk and St Etienne already.

In the second half, Anderlecht came out quickly. In the opening two minutes, the lively Acheampong ran at United’s defence to draw a foul from Michael Carrick, who went into the book. The resulting free kick from Stanciu didn’t trouble Romero in the the United goal though.

Sluggish start to the second half

Shortly after, a mix up in the United defence saw a deflected shot cleared off the line by Antonio Valencia. The ball dropped kindly for Anderlecht who fired it goal bounds again, only for Valencia to block it once more to send the ball out for a corner. United looked sluggish in the opening moments.

They tried to slow down the play to regain a bit of control. And then from nothing, they almost doubled their lead. Pogba played the ball down the line to left-back Matteo Darmian. The Italian put in a good left footed cross to Mkhitaryan who, unmarked in the Anderlecht box, tried to cleverly guide the ball into the far side of the goal. However the scorer of the opening goal was unable to add to his tally as the ball spun agonisingly wide of the far post.

Anderlecht continued to push forward with pace. Acheampong was a constant threat and had the United defence and midfield worried throughout.

Jesse Lingard was replaced by Antony Martial after 63 minutes. Rashford came out the the right to keep an eye on the dangerous Acheampong. He also was able to keep the left back Obradovic pinned back a bit more. The left back was booked within 5 minutes of the switch after a crunching tackle on the youngster.

Rashford was eventually replaced after 75 minutes, with Marouane Fellaini coming on in his place. The Belgian booed with every touch of the ball due to his links with Anderlecht’s rivals Standard Liege.

As the second half started to fizzle out, Fellaini had a decent chance to make it 2-0. Martial led a counter attack down the right. The ball eventually dropped to the Belgian on the edge of the box, but his effort was straight at Anderlecht ‘keeper Ruben.

Then moments later, it really should have been two! Paul Pogba found himself with the ball at his feet in the box. The Frenchman got his shot off across the keeper who managed to pull off a good save to send it for a corner. The £89million made had a decent game, but will have been disappointed to have failed to beat the keeper though.

The magnitude of the miss was soon realised. Just moments later Obradovic made a great run down the left, before putting in a delightful ball. Leander Dendoncker steamed into the area, rose the highest, and powered his header past Sergio Romero in the United goal with just four minutes left. 1-1.

Despite being Manchester United’s best player throughout, Mourinho replaced Mkhitaryan with just minutes left to play. He was replaced by Tim Fosu-Mensah, who was almost instantly booked for a two footed tackle, despite getting the ball.

A late chance for United saw Martials cross towards Ibrahimovic intercepted for a corner, but there was no time to take it as the referee blew his whistle.

Overall, probably a fair result as both teams created chances. Acheampong was a constant threat for the Belgians.
United however have the vital away goal to take to Old Trafford next week where they will be hoping to progress to the Semi-Finals.

Man of the Match: Henrikh Mkhitaryan

Offered pace and creativity in behind Zlatan Ibrahimovic, and often got in front of the Swedish striker when he dropped deep. Scored the vital away goal and was a constant threat playing centrally.