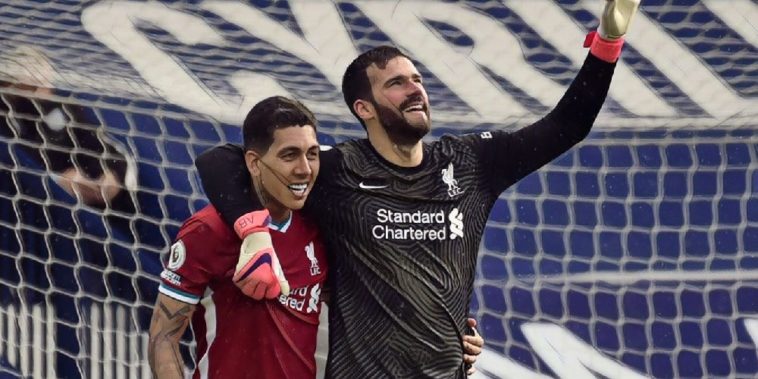 Liverpool had given their Champions League hopes a huge boost in midweek, their 4-2 win over Manchester United putting a position in the top four in their own grasp given that Chelsea and Leicester still need to play each other.

The Reds would however suffer an early setback, Mattheus Pereira releasing Hal Robson-Kanu on the right side of the area, the Wales international afforded time and space to shift the ball into his favoured left foot before placing it beyond Alisson.

Liverpool got back on terms just after the half-hour mark though with a goal out of nothing, Mohamed Salah firing home a first time effort from the edge of the box to leave Sam Johnstone without a prayer of keeping it out.

Roberto Firmino – fresh off the back of his Old Trafford brace – saw an effort come back off the post, while Robson-Kanu saw an effort blocked by the covering Trent Alexander-Arnold as he tried to give his side the lead from an almost identical position to his opener.

West Brom would have the ball in the back of the net in the second-half following a corner, but would see it ruled out for offside with Matt Phillips deemed to be interfering with play in front of Alisson before Kyle Bartley stabbed the ball home.

Meanwhile, the Reds would squander a number of chances at the other end, with Thiago, Alexander-Arnold and Gini Wijnaldum all guilty of missing the target as it started to look like they would be dropping two potentially crucial points.

However, with their 13th corner of the game they would finally find a winner, goalkeeper Alisson making his way into the opposing penalty area, finding himself unmarked and despatching a superb glanced header to give his side a potentially vital three points.

The Brazilian – who suffered the tragic loss of his father earlier this year – became the sixth goalkeeper in Premier League history to score, and the first to net a winner, and speaking afterwards, the 28-year-old was understandably delighted and emotional.

“I’m too emotional, this last month for everything that has happened with me and my family, but football is my life, I played since I can remember with my father,” he told Sky Sports.

“I hope he was here to see it, I’m sure he is celebrating with God at his side.

“Sometimes you are fighting and things aren’t happening. I’m really happy to help them because we fight together and have a strong goal to achieve the Champions League, because we have won it once and everything starts with qualification.

Usually, when a ‘keeper comes up for a late corner, they just end up getting in the way, but with no West Brom defender tracking his run, Alisson said the outcome was down to divine intervention while thanking the football community for their support following his family bereavement.

“I just tried to run into a good place and be in a good place to try and help my players, to bring a defender, but no one followed me and I am lucky and blessed, sometimes things you can’t explain.

“You can’t explain a lot of things in my life, the only reason is God and he put his hand on my head today and I’m feeling very blessed.

“I have been away from interviews for a long time because I always get emotional on that subject but I want to thank all of the media, all the players and teams, I’ve had letters from Everton, Man City, Chelsea and more. If it wasn’t for you all I wouldn’t have got through it.”

Next up for Liverpool is an away trip to face Burnley, before their final game of the season against Crystal Palace.