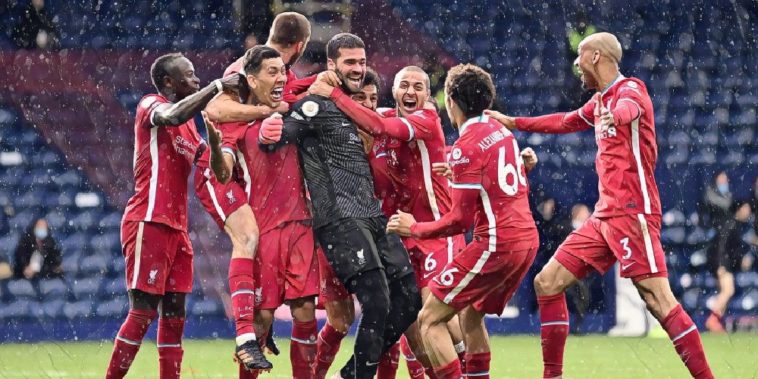 Liverpool kept their Champions League ambitions alive as Alisson Becker became the unlikeliest of heroes to claim three points at the death against West Brom.

Liverpool had given their Champions League hopes a huge boost in midweek, their 4-2 win over Manchester United putting a position in the top four in their own grasp given that Chelsea and Leicester still need to play each other.

The Reds would however suffer an early setback, Mattheus Pereira releasing Hal Robson-Kanu on the right side of the area, the Wales international afforded time and space to shift the ball into his favoured left foot before placing it beyond Alisson.

Liverpool got back on terms just after the half-hour mark though with a goal out of nothing, Mohamed Salah firing home a first time effort from the edge of the box to leave Sam Johnstone without a prayer of keeping it out.

Roberto Firmino – fresh off the back of his Old Trafford brace – saw an effort come back off the post, while Robson-Kanu saw an effort blocked by the covering Trent Alexander-Arnold as he tried to give his side the lead from an almost identical position to his opener.

West Brom would have the ball in the back of the net in the second-half following a corner, but would see it ruled out for offside with Matt Phillips deemed to be interfering with play in front of Alisson before Kyle Bartley stabbed the ball home.

Meanwhile, the Reds would squander a number of chances at the other end, with Thiago, Alexander-Arnold and Gini Wijnaldum all guilty of missing the target as it started to look like they would be dropping two potentially crucial points.

However, with their 13th corner of the game they would finally find a winner, goalkeeper Alisson making his way into the opposing penalty area, finding himself unmarked and despatching a superb glanced header to give his side a potentially vital three points.

Speaking afterwards, Jurgen Klopp was asked for his reaction to the last gasp dramatic winner.

Only six goalkeepers have scored in the history of the Premier League:

“Wow, is a pretty good word,” he told the BBC. “It was spectacular and a good game. What a moment! That is so far the highlight. I hope we have time for another highlight [this season]. It was a tricky game. Winning that way is really special. I couldn’t be happier in this moment.

“It’s the best goal I’ve ever seen scored by a goalkeeper! Striker’s score like that. If Olivier Giroud scores like that you say it’s a worldie. It’s a worldie! Wow!”

The 28-year-old matchwinner suffered the tragic death of his father earlier this year, and Klopp hoped that his winner would provide so him with some much-needed happiness and positivity.

“[Alisson’s] our player, our boy and our brother,” he said. “When he is suffering we are all suffering. It’s hard in these moments.

“There are more important things than football but when football can deliver moments like this for him, and all the boys, and our fans, then football is the best thing for a few seconds than anything else out there.”

The win moves Liverpool a point behind Chelsea and three behind Leicester, the two playing out a repeat of Saturday’s FA Cup meeting on Tuesday evening leaving a place in the top four in the Merseyside outfit’s hands ahead of their remaining games against Burnley and Crystal Palace.

“We are not even halfway through. We have to win going to Turf Moor. We have to win. There will be a proper atmosphere and will not be a friendly game. West Brom fought really hard. I heard Sam Allardyce asked for professionalism before the game and he got that proper answer. In the situation we are in the only thing we have to do is keep pressure on our competitors around us. We recover and go again.

“I saw it plenty of times that players lose the plot [late on in games]. None of us did that. We were calm but full of desire. Three of the best chances we had were in the last five minutes. In these moments it was really good. It’s not easy to stay calm in moments like this but we did and we got the rewards.”