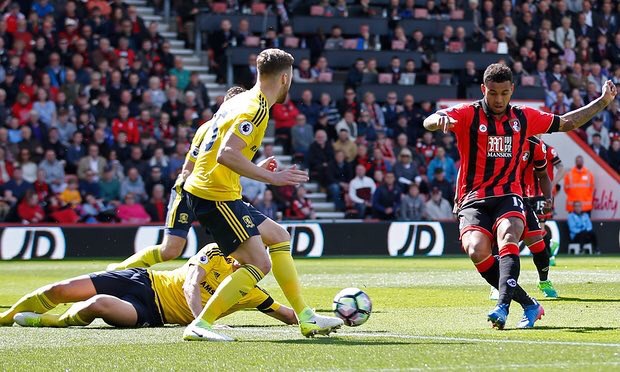 On an afternoon when the sun shined on the south coast, come full time it had surely set on Middlesbrough’s time in the Premier League.

Survival for Boro had already started to look a little far-fetched, but after Saturday’s showing, far-fetched doesn’t quite cover it. It’s now surely out of sight, long in the distance, so far away that even the most optimistic of fans would struggle to envisage a way out of the bottom three.

They arrived at the Vitality Stadium with one aim: to win at any cost. Anything less than there points against Bournemouth just wouldn’t do. Buoyed by an encouraging display against Arsenal, despite defeat, there will have been a quiet confidence about Steve Agnew’s men.

Before kick-off both sets of supporters joined in with a rousing minute’s applause, a tribute to the recent passing of former Middlesbrough centre half Ugo Ehiogu. A popular figure on Teesside, he was part of the team that won Boro’s first, and still only piece of silverwear, that 2004 League Cup triumph at the Millennium Stadium against Bolton. Chants of ‘Ugo’ rang out as fans remembered the well loved and respected former England international.

Agnew elected to start with a 3-5-2 formation, the returning Calum Chambers and George Friend offering a welcome boost to beleaguered Boro. But it was down the right side where they were to be carved open early on. The impressive Marc Pugh, playing his 250th game for the club, found himself in acres of space. Crossing smartly for Josh King, the in-form Norwegian forward tucked away from close range. Boro’s defence, their one shining light this season, left exposed far too easily after just 96 seconds.

Any confidence they had quickly evaporated as Bournemouth, setting up camp in Boro’s half, took the game to their rattled opponents. They could smell blood, even so early on, and quickly established full control of the game.

Middlesbrough struggled to get a touch, yet when they did manage to, resulting in a foray into The Cherries’ penalty area, the chance was wasted in an almost laughable fashion.

Gaston Ramirez has cut a petulant, frustrated figure since he failed to seal a move away in January, and on this evidence he seemed intent on sabotaging any kind of a Boro response. Getting clear in the box, with a chance to shoot he took possibly the worst dive you’ll see this season. It was that bad. Having got past his man he inexplicably appeared to fall under a challenge from nobody, a fall so late there was no doubt that the theatrics were, well, just theatrics. He was deservedly booked by referee Graham Scott, who was not fooled by Ramirez’s embarrassing attempts to avoid a caution, as the Uruguayan lay flat out on the turf claiming injury.

Just moments later his team found themselves two behind. Dispossessing Adam Clayton on the edge of the Boro area, Harry Arter found Benik Afobe, who in turn found the back of Brad Guzan’s net, slotting the ball coolly underneath the onrushing American. At this stage a comeback started to look increasingly unlikely, moments later however it would look nigh on impossible.

Despite being booked only minutes earlier, Ramirez lunged at Pugh, and whilst it might not have been the worst tackle, it rightly warranted his second booking of the game. As Ramirez trudged off on 20 minutes you can only imagine what the travelling support in the away end were thinking. The 650 mile round trip made by the loyal Boro fans was going without reward as their team lurked from one disaster to another.

The Bournemouth pressure continued, Arter trying his luck from outside the box, but his shot sailed over Guzan’s goal. Two-nil up and against 10 men there were no signs that Eddie Howe’s men were going to go easy on Boro, after all. Howe had stated recently that his team wasn’t quite out of the relegation battle. A win here though would all but sew up another season in the top flight.

Middlesbrough finally mustered up a chance of some note, Marten De Roon’s hitting a shot from Alvaro Negredo’s knockdown, however Artur Boruc was equal to the effort with a fine diving save in the home goal.

But this was half an hour into the game. Until then, Boruc had been a mere passenger, an easier opening to a game he’ll have not had in a long while you feel.

That would be De Roon’s lasting mark on the game, the Dutch midfielder taking a blow to his ankle, eventually succumbed to the injury, replaced by Fabio minutes before half time. A further setback for his team, the headache got worse for Agnew and his staff. It was quickly turning into a simply awful day at the office.

The Cherries looked threatening every time they went forward. Later, King and Arter caused mischief once more, but mercifully for Boro’s defence they failed to add to their goal tally before half time. It was in stark contrast to the opposite end where Negredo, like many times this season, cut a lonely figure, isolated even more by Ramirez’s absence.

As the half time whistle approached, fans from around the ground joined in to sing and applaud on the 44th minute, and for a brief moment the game took a back seat. As planned by the Boro fans, “Ugo Ehiogu tra la la la la” echoed in the away end, a fitting tribute to the man described this week as ‘gentle giant’, a ‘man mountain’.

In the second half Middlesbrough appeared to start the brighter of the two sides, Dani Ayala heading over from a corner. But no sooner did Boro appear to making steps towards getting a foothold in the game, Bournemouth hit back with Afobe going close inside the area, forcing a smart stop from Guzan.

Ryan Fraser was also causing problems, the winger skipping past Friend, drew a foul from the left back around the hour mark. Friend was perhaps lucky not to see a second yellow, but Graham Scott gave him a final warning.

The last thing they needed was another dismissal, especially with half an hour remaining and an unforgiving Bournemouth side looking well in the mood to do more damage.

The ever menacing Fraser was at it again, only this time he was taking aim. A whistling strike headed to the top corner, however Guzan managed to claw it away.

Yet Bournemouth’s third was coming, it was only a matter of time.

On 65 minutes, after failing to clear their lines from a corner, Boro were cut open once more, this time by a fine Cook through ball. It fell to Pugh who calmly slotted the ball across Guzan and into the bottom right of the goal.

And is if that wasn’t bad enough, just five minutes later Bournemouth made it 4-0.

A short free-kick was laid off to Charlie Daniels who sidestepped Clayton as if he wasn’t there, before firing low and hard past the helpless Guzan.

A well worked move, but one that was made all too easy for Daniels and Bournemouth. It was in keeping with the way the game had gone. A lack of urgency, concentration, had been Boro’s downfall once more.

But for Howe’s men taking their foot off the gas it could well have been double figures, Boro were that bad!

A sorry sight in game they really had to give everything in to stand any sort of chance of coming away with the points required to keep their faint survival hopes alive.

A flurry of efforts late on from both Arter and substitute Lys Mousset could’ve made it embarrassing all the more, but The Cherries had to make do with just the four goals.

The final whistle couldn’t come soon enough for Boro, the final stages showing players who looked like they’d rather be anywhere else than on the pitch, down the tunnel perhaps rather than chasing lost causes and playing for pride.

Pride is now in short supply; they’ll have to go some way to restoring it.

For Eddie Howe, the game saw his team claim the win that will probably just about see them all but guarantee their Premier League status. A satisfying result in what was quite frankly a walk in the park, barely tested by a limp opposition in Boro.

For many of the travelling support, Bournemouth represents the sort of model they’ve been crying out for – a team intent on playing ‘the right way’. They may concede more regularly, losing by more than just the odd goal; however they win games, 10 to be precise. Six more than Boro’s offering, whilst also scoring more than twice the Teessiders have managed all season. It’s not hard to see where the differences lie.

On the long journey back up North you can’t help but feel the fans have been short-changed. They deserved at least the same level of commitment from the players, considering how far they had to travel, yet once again they were given little to shout about.

On this games evidence, Middlesbrough are light years behind, and looking at the table they’ll be a whole division behind come August.

A fair analysis of the game Boro were awful let’s hope we do better against Sunderland.