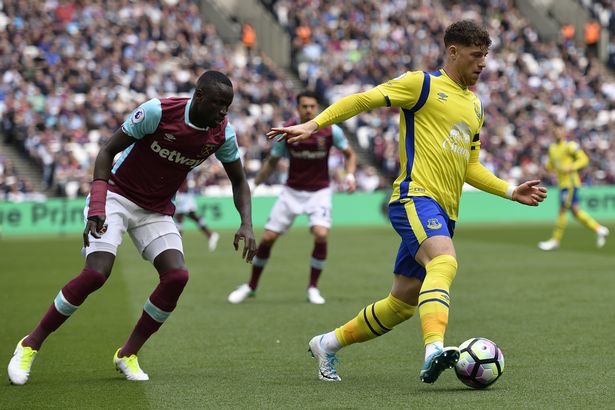 A goal-less draw between West Ham and Everton at London Stadium on Saturday moved the Hammers one point closer to Premier League safety with 38 points, seven clear of the relegation places with four games to go.

For Everton, a draw was not good enough as they failed to close the gap sufficiently on the top four. The Toffees are now in sixth spot, six points behind Manchester City who currently occupy the last Champions League place.

The opening exchanges of the game had a distinct end-of-season feel to them. It was hard to believe the home side still need points to avoid the drop, while Everton have a chance – albeit slim – of finishing in the top four.

Neither side could manage the required intensity, particularly in the opposition’s half; consequently chances were few and far between.

The closest Everton came to scoring in the first 45 minutes was from a near calamitous mistake by Hammers keeper Adrian.

Brought back into the side for his first game since November, the Spaniard horribly miss-kicked a clearance, which swerved towards his own goal. Luckily he managed to dive on the ball before Everton’s Kevin Mirallas could pounce.

West Ham were missing their leading marksmen, as both Andy Carroll and Michail Antonio were out injured. Leading the forward line, Andre Ayew ran around a lot to little effect, while his partner Jonathan Calleri failed, yet again, to convince the home crowd that he should even be on the pitch.

Calleri has managed one goal all season, and this was probably on his mind as he unfortunately looked off the pace and short of confidence.

It was no surprise that a defender came closest to scoring for the Hammers in the first half. James Collins powering a header inches wide from six yards out.

The away team made a couple of half time substitutions, but this did not have the desired effect. Everton still looked sluggish and devoid of ideas going forward.

Premier League top goal-scorer, Romelu Lukaku, did not have a shot on target all afternoon. Collins, at the heart of the home side’s defence, was a colossus who marshalled Lukaku out of the game all afternoon

On 70 minutes, substitute Ademola Lookman finally managed an Everton shot. It went high and wide and they never troubled the Hammers defence again.

For the final 30 minutes, West Ham replaced the misfiring Calleri with Diafro Sakho. Although the Senegalese forward is short of match practice, having been injured for most of this season, he added extra pace and urgency to West Ham’s attack.

Left back Arthur Masuaku had his best game in a Hammers shirt. Taking on players and running the wing like an outside right, he – along with Manual Lanzini – was responsible for most of West Ham’s best second half moments.

In the end, plenty of West Ham possession did not yield enough penetration and the Everton defence remained un-breached.

Next up for the Hammers is an away game against Stoke City on Saturday, while Everton host Chelsea on Sunday.