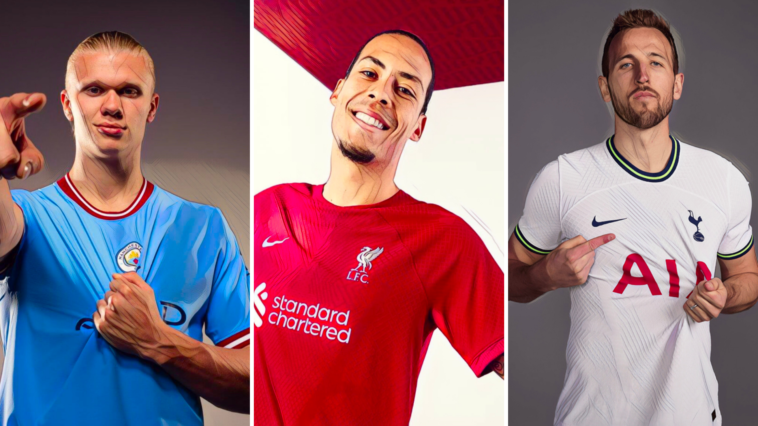 From title winners, to the race for top four, and the relegation battle, we look at some of the Premier League’s pre-season odds. For football fans, knowing the odds helps a lot in betting winning combinations. For casino players, the task will be more difficult, but here, in turn, there is an opportunity to use 2 deposit casino, which will allow you to try your luck with minimal risk.

Manchester City will begin the defence of their crown as favourites for the title once again, as the champions pursue a fifth title in just six seasons.

Pep Guardiola’s side have strengthened with the signings of Erling Haaland, Julian Alvarez and Kalvin Phillips, as City look to become just the second side – after Manchester United 1999-2001 and 2007-2009 – to win the Premier League three seasons in a row.

Liverpool finished as runners-up by just a single point last season and will be expected to pose the biggest challenge to City, with the odds increasing significantly beyond the top two.

Tottenham are 14/1 third favourites for the title, with Antonio Conte’s track record a major factor. Conte has won five league titles in his last seven full seasons as a manager, a run which covers three clubs and two different divisions. Spurs are without a top-flight crown since 1961 and without a major trophy of any form since 2008.

Chelsea (16/1) are fourth favourites, while Erik ten Hag and Manchester United are priced at 28/1

Manchester City (1/33) and Liverpool (1/10) begin the season as title favourites and are odds-on for a top four finish, though it’s a closer market for the chasing pack.

Chelsea and Tottenham are priced evenly at 8/11, with both clubs having secured Champions League qualification last season.

Manchester United (11/8) and Arsenal (7/4) are expected to provide a close challenge to last season’s top four, as both teams look to secure a Champions League return.

Newcastle are next in the rankings (8/1) after a resurgence under Eddie Howe across the second half of last season. The Magpies’ owners have grand ambitions for the coming campaigns and will invest this summer in a bid to catch up with England’s elite.

The newly-promoted sides are the three favourites for an instant return to the second tier, given the often sizeable gap between the Championship and Premier League.

Bournemouth are favourites for the drop after a quiet summer transfer window to date, while Nottingham Forest – returning to the top division for the first time in 23 years – are second-favourites to join the Cherries.

Fulham won the Championship last season with 106 goals scored and will hope Aleksandr Mitrovic and Harry Wilson can maintain their form following the step up. Marco Silva has secured the eye-catching arrival of Joao Palhinha from Sporting Lisbon and continue to work behind the scenes on several ambitious deals, as the Cottagers look to end a yo-yo existence.

Leeds – who survived on the final day of last season – and a Brentford side without Christian Eriksen are the relegation favourites among the established Premier League clubs.

Erling Haaland’s arrival into the Premier League has caused huge excitement, with the Manchester City forward installed as the instant favourite for the Golden Boot.

Haaland scored 86 goals in 89 appearances across his two-and-a-half seasons at Borussia Dortmund and serviced by the likes of Kevin De Bruyne and Phil Foden will have his eyes on finishing as the Premier League’s leading scorer.

Darwin Nunez, who signed for Liverpool in a £64m deal this summer, is 12/1 after finishing as Portugal’s leading scorer last season, while 2019/20 Golden Boot winner Jamie Vardy is 25/1.

PFA Player of the Year

Haaland also leads the rankings for the PFA Player of the Year award, with big things expected of the marquee man in Manchester.

How many Premier League goals will Erling Haaland score next season? 🇳🇴 pic.twitter.com/xp6jgU4nDC

Mohamed Salah – who claimed a PFA Player of the Year and FWA Footballer of the Year double last season – is 7/1, ahead of Kevin De Bruyne (8/1) who won the award in successive seasons in 2020 and 2021.

Salah, De Bruyne and Cristiano Ronaldo could all become the first player to win the accolade on three occasions, with their two successes a record currently shared with Mark Hughes, Alan Shearer, Thierry Henry and Gareth Bale.