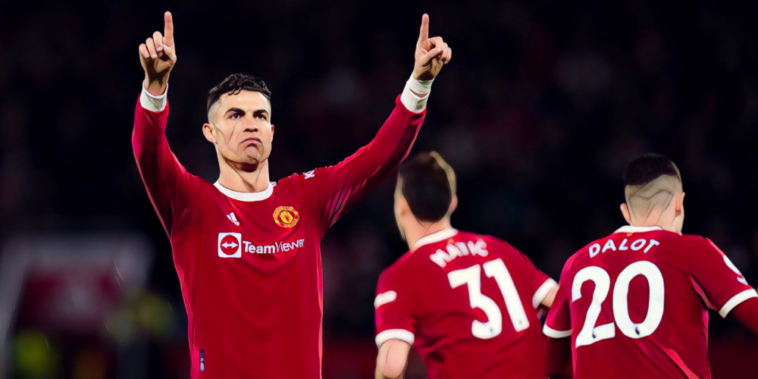 Cristiano Ronaldo wants to leave Manchester United this summer, with the forward’s romantic return having not worked as planned.

Despite an impressive individual season for the 37-year-old, the Red Devils endured a miserable campaign to finish sixth and miss out on Champions League football.

Ronaldo scored 24 goals in all competitions and remains convinced he can still win trophies at the highest level, with a host of clubs reportedly interested in offering him an avenue back into the Champions League next season.

So for those of you who like to gamble online and are interested in the best no verification casino, here are the five favourites to sign Cristiano Ronaldo.

Real Madrid have been priced at odds of 12/1 to sign Ronaldo this summer, in a move that would see the club’s all-time record goalscorer return to the Bernabeu.

Ronaldo scored a staggering 450 goals in 438 games across nine seasons at Real Madrid, having joined the club in a then-world record £80m deal from Manchester United in 2009.

He departed for Juventus as the club headed in a new direction in 2018, spending three seasons in Italy before his return to Old Trafford last summer.

Real had hoped to add to their attacking options this summer with the signing of Kylian Mbappe, but the forward’s decision to sign a new deal at PSG proved frustrating for the Bernabeu board.

Ronaldo would represent a short-term option for the European champions and would return a different player to the one who departed, while the performances of former teammate Karim Benzema  – who has scored 131 goals in four seasons since Ronaldo’s exit – has seen him assume main man status in the Spanish capital.

Barcelona are believed to have discussed the prospect of signing Ronaldo with the forward’s agent, Jorge Mendes, having held talks with club president Joan Laporta over a number of players this week.

Barcelona’s reported interest comes after frustration in the club’s pursuit of Robert Lewandowski, with Ronaldo emerging as a potential alternative should Bayern Munich not lower their demands.

A move to Catalonia would be controversial given his past links to Real Madrid, though a number of illustrious names – including Michael Laudrup, Ronaldo Nazario and Luis Figo – have previously crossed the El Clasico divide.

Barcelona recently raised funds by selling off television and merchandise rights, but would require compromise from both United and Ronaldo to conclude a shock deal.

Ronaldo has been linked with Bayern Munich, should the aforementioned Lewandowski be allowed to move on.

Having won league titles in England, Spain and Italy, the move to the Bundesliga’s dominant force would provide the Portugal international to add another chapter to his legacy.

Despite the arrival of Sadio Mane from Liverpool, a move to Germany remains a potential option and it is a deal that club great Lothar Matthaus has implored his former side to pursue.

“Ronaldo to Bayern would be sexy,” Matthaus told Sky Germany. “At least you should think through the options and play through them once.

🇪🇺 Cristiano Ronaldo has only scored more goals against Juventus (10) than Bayern Munich (9) in the Champions League pic.twitter.com/gw11N0tM15

“If Bayern are of the opinion that Ronaldo is still physically able to really help for a year or two and that they can invest the transfer fee generated for Robert Lewandowski more or less like-for-like in the Portuguese megastar, I would think about it. Of course, that would not be a transfer with a view to the future. He’s 37 and would always make headlines.

“I’m also not sure if he fits into Bayern Munich’s system. But he’s still an outstanding goal-scorer. He’s one of the best strikers of all-time and would certainly score around 30 goals. Refinancing through jersey sales and the like would be guaranteed.”

Chelsea have emerged as surprise contenders to seal the signing of Ronaldo, with the club’s new co-owner, Todd Boehly, believed to be exploring the chance to sign the all-time great.

The west Londoners have both the finances and Champions League football to attract Ronaldo, while Thomas Tuchel is in need of attacking reinforcements after sanctioning the loan exit of club-record signing Romelu Lukaku to Inter Milan.

Chelsea have been told Cristiano Ronaldo could be willing to join them this summer, but the club are yet to decide whether to make a formal offer, sources have told ESPN. pic.twitter.com/YlmzDrskah

Lukaku’s struggles last season make the signing of Ronaldo a risk for Chelsea, with Tuchel reportedly interested in moulding his forward line into a fluid and more mobile unit.

Ronaldo’s advancing years make him appear ill-suited to such demands and an offer from Chelsea will demand on Tuchel’s verdict, despite the star-factor that is said to be attracting the club’s new American owners. United, however, would be reluctant to lose Ronaldo to a domestic rival.

Remaining at Manchester United is the likeliest possibility according to the bookmakers, with the Red Devils having insisted that last season’s leading scorer is not for sale.

Ronaldo is contracted to the club until next summer and Erik ten Hag is keen to keep the 37-year-old among his plans as he bids for a successful debut season.

Since Cristiano Ronaldo rejoined Man United, they haven’t won a single game without him. pic.twitter.com/YrAE99I0XH

United’s focus in the transfer market has been in other areas of the squad and Ronaldo’s exit would be a damaging blow to a squad already lacking options in the final third, with Edinson Cavani having departed on a free transfer and the future of Anthony Martial uncertain.

Mason Greenwood also remains unavailable for selection and United will hope Ronaldo honours his existing deal and help the club’s pursuit of silverware and a top four finish next season.