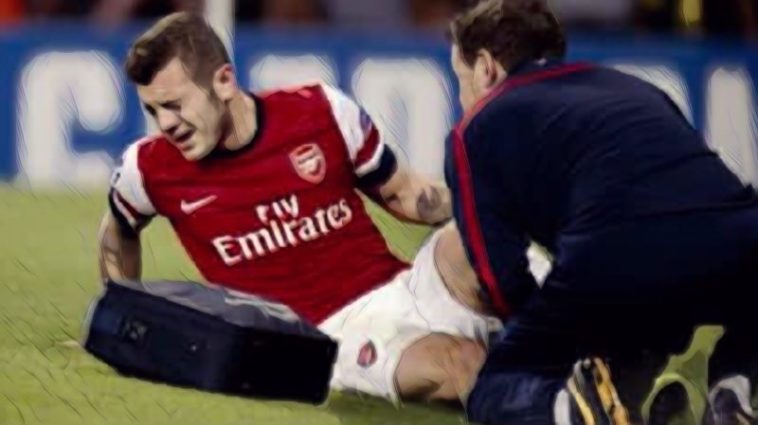 There can be little more frustrating than a spell on the sidelines, unable to take the field due to constant niggles, aches and pains.

Throughout the history of the Premier League, we’ve seen several stars blighted by the sad state of injury, their time on the treatment table robbing them of opportunity to perform on the pitch.

We’ve decided to take a look at the unfortunate careers of some of football’s famous faces, with 10 of the most injury-prone players of the Premier League era.

The Canadian-born England international who began his footballing journey in Germany, Hargreaves won four Bundesliga titles and the Champions League with Bayern Munich before earning his move to the Premier League.

The all-action midfielder joined Manchester United in a £17m deal in 2007, but injuries soon hampered his progress following his switch to Old Trafford.

He would make 34 appearances in his debut season as United won a Premier League and Champions League double, but he would never be the same player again after discovering he had patellar tendonitis in 2008.

Reputable surgeon Dr Richard Steadman, who had worked on the likes of Ronaldo, Alan Shearer and Michael Owen, described Hargreaves knees as the ‘worst he had come across’ and he would make just four league appearances over the next three seasons.

Hargreaves would join rivals Manchester City on a free transfer in 2011, making just one league appearance before retiring from football.

Having burst onto the scene with boyhood club Newcastle, Andy Carroll moved to Liverpool in a then British-record £35m deal in 2011, but he would never rediscover his best form for a sustained period due to injury problems.

Niggling problems had bothered the target man at Anfield, but having been deemed surplus to requirements he moved to West Ham where he would become a treatment table regular.

Having failed to prove he can return to full fitness, he was released this summer and returned to Newcastle on a free transfer. Still just 30, the nine-cap England international is currently recovering from ankle surgery undergone earlier this year as he continues his latest rehabilitation.

Once tipped as the future of English football, Wilshere starred as a teenager for Arsenal and drew rave reviews following an outstanding performance against Barcelona in the Champions League.

From there, however, Wilshere failed to fulfil his true potential as injuries hampered his progress and diminished his physical attributes.

Persistent knee and ankle injuries have seen him go under the knife on several occasions, with the midfielder making his latest comeback at current club West Ham for whom he made just eight appearances in his debut season.

At 27, there is still time for Wilshere to force his way back into the England set-up, though many feel his injury hell means we will never see him back to his very best.

Likened to Patrick Vieira upon his arrival at Arsenal in 2006, Diaby was a powerful box-to-box midfielder who saw repetitive injury problems stall his career.

An impressive 2009/10 season saw many predict the Frenchman would be a key figure for Arsenal for seasons to come, but his problems soon became apparent and he made just 32 league appearances over the next five seasons.

He was allowed to leave the Emirates on a free transfer in 2015, but two seasons in his homeland with Marseille saw injuries persist, Diaby making just five Ligue 1 appearances in two seasons before retiring in 2017 aged just 32.

Part of an exciting young Leeds side at the turn of the millennium, Woodgate moved to Newcastle once the Yorkshire side’s financial problems hit and developed into one of the Premier League’s finest defenders.

His form attracted the attention of Spanish giants Real Madrid who signed the defender in 2004, though having suffered a serious injury in his final game for Newcastle his debut was delayed for over a year.

That injury would prove to be the start of persistent problems for Woodgate, who made just nine league appearances in Spain before returning to the Premier League at Middlesbrough.

In seven seasons at Middlesbrough, Tottenham and Stoke City, he would make over 30 appearances just twice as muscle injuries plagued the latter half of his career, including missing the entirety of the 2010/11 season.

The former England international was given the name ‘Sick-Note’ due to his almost permanent unavailability through injury, the winger having endured persistent problems throughout his Premier League career.

It is a reputation that Anderson himself remains unhappy with, a tag he was unable to shed despite averaging 25 appearances a season during his time with Tottenham.

A fine player when fit, it just wasn’t quite often enough.

The curious case of Ledley King, a man who was seemingly unable to train but still produce top-class Premier League performances.

The Tottenham stalwart suffered from chronic knee problems throughout his career, a lack of cartilage meaning the former England international often resorted to gym work throughout the week as his teammates took to the training pitch.

Described by the likes of Thierry Henry as the toughest opponent he faced in the Premier League, King’s career could have been so much more were it not for relentless struggle with knee issues.

Another former England international and Tottenham player who suffered with injury problems throughout his career, the midfielder having been plagued with problems particularly since the turn of the millennium.

Redknapp would miss the entirety of Liverpool’s 2000/01 season, in which Gerard Houllier’s side won a treble of cup competitions, before featuring just four times in the league the following season.

He’d finish his career at Southampton under the management of father ‘Arry, before moving into punditry and so far remaining injury-free in the comfort of the Sky Sports studio.

A career very much of two halves, Michael Owen was amongst Europe’s most feared forwards after emerging as a teenager at Liverpool. Blessed with lightning pace and ice cold finishing ability, a serious hamstring injury suffered at Leeds aged just 19 forcing him to alter his game.

Owen remained a leading forward through the early 2000’s, winning the Ballon d’Or in 2001, but after returning from a spell at Real Madrid with Newcastle in 2005 his career nosedived.

A series of problems including a broken metatarsal and cruciate knee ligament were amongst a host of problems, before thigh and groin problems hampered his latter years.

His problems were so bad towards the end of his career that the forward latter admitted to BT Sport he ‘couldn’t wait to retire’.

A once promising talent with blistering pace, injuries blighted Dyer throughout his career. Part of an exciting, young Newcastle team under Sir Bobby Robson, Dyer’s career spiralled downwards in the latter half as he struggled to maintain his fitness.

His list of problems included an Achilles tendon injury, fractured foot, and fractured leg, the midfielder making just 34 appearances in all competitions during a four-year spell at West Ham.

A two-year spell at QPR was even worse, Dyer suffering prolonged absences from the side and making just five appearances in two seasons.

He retired in 2013 aged 34, finishing his career with a short stint at Middlesbrough.