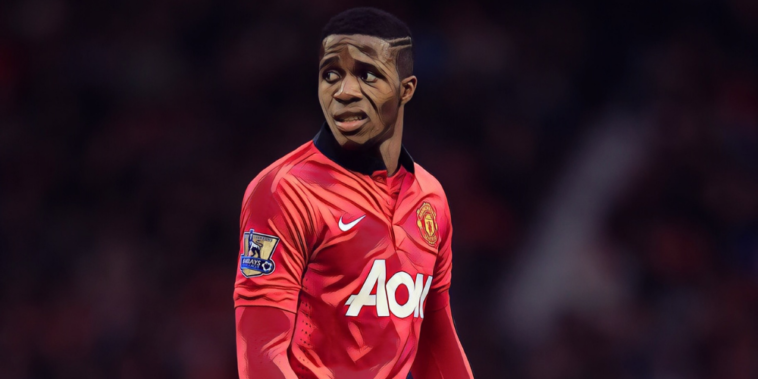 Wilfried Zaha has opened up on his struggles at Manchester United and admits he was ‘a mess’ as he failed to make an impression at Old Trafford.

Zaha signed for Manchester United in January 2013 before remaining on loan at Crystal Palace for the remainder of the season, joining up with his Red Devils’ teammates that summer with the manager who signed him – Sir Alex Ferguson – having retired.

The winger failed to make an impact under managers David Moyes and Louis van Gaal and made just four appearances for the club in all competitions, spending time on loan at Cardiff and with Crystal Palace before a permanent return to the latter.

Zaha has since established himself as one of the Eagles’ greatest players and has been continually linked with a return to one of England’s biggest sides, the 28-year-old having been strongly linked with a move to Arsenal in 2019.

The Ivory Coast international has now opened up on his struggles and says he was in ‘a very bad place’ during his time on the periphery, recalling how he was left out of first-team training after finding himself out of the club’s plans.

‘I was in a very bad place, literally going out all the time, doing mad stuff. I was a mess. When you know you’re not playing, the team are training and you’re just stood on the side doing some training drill,’ Zaha told the Judy Podcast.

‘I remember it was just me and Kagawa doing some shooting drill just the two of us. So you know they don’t care about you basically. Not even training with the Under 23s, week in week out. You’re not getting a look in.’

Zaha arrived at the club as a highly-rated prospect and admits to being ‘star struck’ as a young player in the Manchester United dressing room, before revealing he remains ‘gutted’ at Ferguson’s decision to retire having seen the influence the club legend had on developing players.

‘I was sat next to Giggs. I’m thinking oh my days, I’m seeing Rooney there, Vidic, Rio, van Persie. Nani was still there and he is like a copy of Ronaldo, his frame, it’s so mad.

‘And then when you actually play with them, it’s crazy. I was 100 per cent star struck when I was there.

‘Obviously I’m gutted [that Ferguson left], because I spoke to him and I seen what he done and what he’s made players into, everyone has seen what he’s done with Ronaldo. So I was gutted that he left, but I was “it is what it is”.’