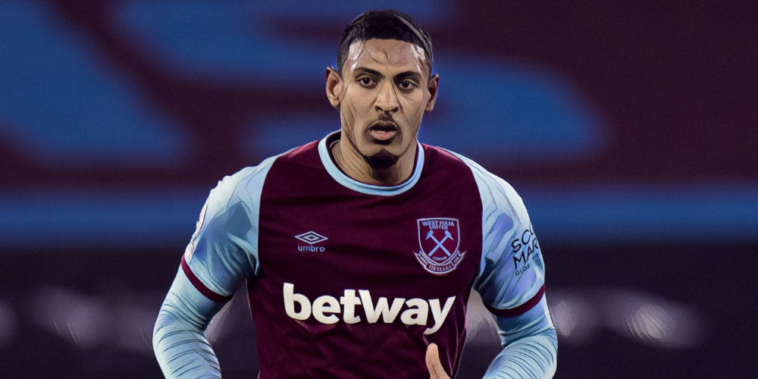 West Ham are once again on the hunt for firepower with the club’s seemingly perennial striker search set to continue, the sale of club-record signing Sebastien Haller to Ajax this month leaving the club short of options in attack.

Michail Antonio has taken on the mantle of being West Ham’s talisman in recent months but the star will need a supporting cast, especially given the 30-year-old’s troublesome hamstring issues.

Once again a whole host of names have been linked with a winter window move to the London Stadium and the Hammers’ faithful will hope the next recruit is right following a hugely disappointing collection of forward arrivals in recent years.

The takeover of David Sullivan and David Gold over a decade ago was hoped to spark a new era of success at West Ham, though they have proved massively unpopular with the club’s fans and have had an endless amount of misses when it comes to centre-forward recruitment.

We’ve picked out some of those forgettable faces, here are 10 of the worst strikers West Ham have signed in the Sullivan and Gold era:

Facing up to the prospect of relegation during the 2010 winter window, the West Ham board looked for some Premier League experience and signed Egyptian international Mido on loan from second tier Middlesbrough.

The former Tottenham and Ajax forward had spent the first half of the campaign on loan at Zamalek, but undeterred by just one goal in 15 Egyptian Premier League appearances the Hammers’ hierarchy were convinced the enigmatic star was the man to fire them to safety.

West Ham ultimately survived after finishing the season in 17th, though Mido’s contribution to the cause was limited at best, failing to score in nine league appearances before heading back to the Riverside.

Arriving in the same transfer window as Mido was fellow forward Benni McCarthy, another player with experience in the Premier League and one who boasted a respectable goal record in England.

The South African international had scored 37 goals in 109 league appearances for Blackburn before making a £2.5m mid-season switch to the capital, though he looked a shadow of the player who had been a hit during three-and-a-half seasons with Rovers.

McCarthy appeared both overweight and overpaid as he failed to score in 14 appearances, with Hammer’s vice-chairman Karren Brady labelling the signing of the forward as ‘a big fat mistake’ and describing him ‘as a player devoted to filling his belly more than filling the net’.

He was released after less than 18 months in east London, securing himself a £1.5m pay off in the process.

Premier League cast-offs seem to have been in fashion for West Ham for much of the Gold/Sullivan era, the signing of John Carew finalised with the hope of firing the relegated Hammers back into the top tier.

Carew had impressed during four seasons at Aston Villa but arrived at West Ham following an underwhelming loan at Stoke, and failed to rediscover his form during a single season in the Championship.

The Norway international contributed just two goals despite West Ham’s promotion and was released at the end of the season, announcing his retirement a year later after failing to find a new club.

Marouane Chamakh is often labelled as one of Arsenal’s biggest transfer flops but the forward initially began brightly in north London, scoring 11 goals in all competitions during his debut campaign before falling out-of-favour at the Emirates.

West Ham had hoped to spark a renaissance in the Moroccan after securing his services on a season-long loan deal in 2012/13, though it proved yet another market mistake as he made just three appearances and failed to score.

He later spent three seasons at Crystal Palace before a brief stint at Cardiff, retiring with a record of just 15 goals in 105 league appearances in English football.

After the signing of several Premier League-based flops West Ham turned their attentions abroad in January 2014, and must surely have thought they had made a shrewd acquisition in the loan signing of Marco Borriello.

Borriello was an experienced Italy international with spells at AC Milan, Juventus and Roma on his résumé, though flattered to deceive entirely following his temporary switch from the latter.

The forward seemed ill-suited to the demands of English football and made just two goalless appearances, a huge disappointment given the expectations that greeted his arrival at Upton Park.

Managers often revert back to familiar faces in times of need and so the case proved when Slaven Bilic secured the signing of Nikica Jelavic in 2015, securing a £3m deal for his compatriot after working alongside the star during his time in charge of the Croatian national team.

Jelavic had previously enjoyed an impressive spell at Rangers before a bright start at Everton, though arrived at West Ham after his eight league goals had failed to prevent Hull City’s relegation to the Championship.

The forward’s style seemed at odds with the tactics Bilic was attempting to implement and he made just two league starts across 13 appearances, scoring just once before moving to the Chinese Super League with Beijing Renhe.

West Ham have taken a scattergun approach when it comes to signing strikers over the past decade but if ever there was a player who seemed suited to physical demands of the Premier League, it was Emmanuel Emenike.

The Nigerian international possessed raw pace and was built like the proverbial brick sh*thouse, whilst he had experience at the highest level and enjoyed strong spells at both Spartak Moscow and Fenerbahce.

Emenike failed to find his feet during a short-term loan, however, and went goalless in the Premier League goal across 13 appearances, scoring just twice for the club with both goals coming in a 5-1 cup win against second tier Blackburn.

Perhaps the biggest disappointment across this entire list, Simeone Zaza arrived with big hopes after featuring for Italy at Euro 2016, even if his most telling contribution was one of the worst penalties ever witnessed in international football as the Azzurri crashed out in a shoot-out.

It appeared that his horror show with the national side had dented the confidence of a player who had previously impressed with the likes of Sassuolo and Juventus, with Zaza nothing short of terrible during a dreadful spell in English football.

The deal for Zaza included a €5m loan fee with a €20m obligation to make the move permanent should he reach a certain number of appearances, a situation that Slaven Bilic ensured never happened given the forward’s toils in the East End.

Signed for fee of £8m and barely afforded an opportunity, Albian Ajeti has failed to convince the West Ham management that he can be an established Premier League player.

The youngster arrived in 2019 after compiling an impressive goal record at Basel but failed to start a single Premier League fixture, leaving on loan for Celtic last summer having not scored across 12 appearances in all competitions.

He is currently struggling to cement a starting position with the Scottish champions, despite scoring five goals in just six starts north of the border.

Haller’s departure this month has led to West Ham’s latest search for a new frontman, the club-record arrival of the forward having failed to work out as planned.

Haller had impressed during spells in the Netherlands and Germany and arrived in the capital off the back of a 20-goal season for Eintracht Frankfurt, starring alongside Luka Jovic as the Bundesliga side reached the Europa League semi-finals.

The £45m fee placed pressure upon the star’s shoulders and he appeared weighed down by the expectation, whilst his lack of mobility proved in stark contrast to the all-action performances of fans’ favourite Michail Antonio.

After just 18 months and 10 league goals West Ham have decided to cut their losses, sanctioning his sale at an eye-watering loss of around £25m.