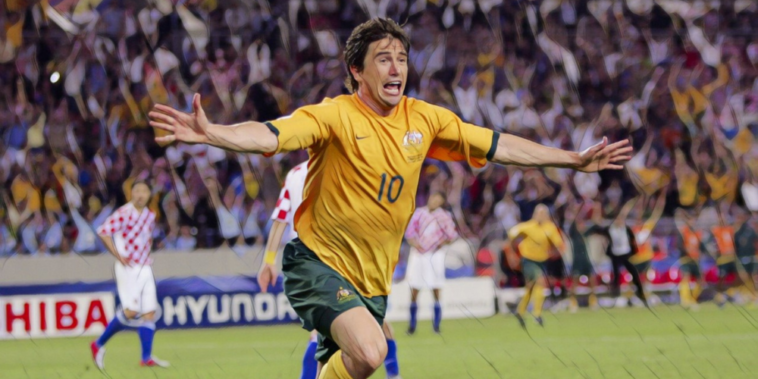 Harry Kewell’s career was one that fell into two quite clearly different halves. His exciting emergence came as part of a Leeds team bristling with fearless promise, but his brilliance came alongside a fragility that meant early expectations were never quite fulfilled.

On natural ability alone there is little debate that Kewell is the most talented footballer Australia has produced, having departed his homeland as a teenager to travel half-way around the world and test himself in the Premier League.

Hailing from working-class western Sydney, Kewell formed part of a talented Marconi Stallions’ u-13 squad which travelled to Europe and Asia in search of new tests after winning state titles. His talents were soon acknowledged at Leeds United, who offered Kewell and compatriot Brett Emerton a trial.

Each impressed, but it was Kewell who was allowed to remain at Elland Road. His English father ensured visa requirements were satisfied and his ascent to Socceroos stardom began.

His senior debut came a little more than two years later, aged 17, before he formed part of the team crowned FA Youth Cup winners during the 1996/97 campaign. That team consisted of future first-team stars in Paul Robinson, Jonathan Woodgate and Alan Smith, each of whom joined Kewell in breaking into the senior side as Leeds placed their faith in youth.

Having been crowned champions in the final pre-Premier League campaign, Leeds had struggled to compete at the top end of the division following the launch of the rebranded top flight. The late nineties proved a time of optimism however, with Kewell at the centre of it.

Kewell was the jewel in the crown of the most talented collection of prospects seen in the Premier League since Manchester United’s Class of ’92. He was the first to break into the side during the 1997/98 campaign, before others followed.

Under the management of David O’Leary, Leeds began to rise. O’Leary had stepped up from his assistant role following George Graham’s departure and immediately ensured Elland Road was a venue for expression, casting aside the rigidity of his predecessor. The excellent academy graduates were the nucleus of a team that was added to with marquee imports over the following seasons, as Leeds dared to dream.

It was an exciting time and no player embodied the fearless flair of O’Leary’s Leeds more than Kewell, whose game was centred around audacity and a cultured left foot capable of the spectacular.

Kewell’s brilliance was prominent during the 1999/2000 season, as Leeds finished third in the Premier League to secure Champions League qualification and embarked on a run to the UEFA Cup semi-finals.

The Australian scored 17 goals in all competitions to be named as the PFA Young Player of the Year, becoming the first, and so far only, non-European winner of the accolade. His performances piqued the interest of Europe’s elite and Leeds turned down a significant offer from Inter Milan for his services, as the club looked to keep together a talented team that appeared to be going places.

The following season proved even better, as Leeds reached the top of a thrilling rise-and-fall saga still etched into Premier League folklore. An exhilarating European run saw Leeds reach the last four of the Champions League, securing famous wins over AC Milan, Lazio and Deportivo La Coruna in the process.

Kewell has been joined at Leeds by compatriot Mark Viduka, with the all-Australian pairing a devastating double act both at home and on the continent.

Leeds’ time as credible contenders for major trophies would soon come to an end. The financial mismanagement of chairman Peter Risdale and superfluous spending turned Leeds into a club in crisis, and a fire-sale ensued in a desperate bid to balance the books.

Kewell remained for the 2002/03 season and enjoyed his best ever goalscoring campaign in the Premier League, with the excellence of the winger and Viduka ensuring Leeds survived another season in the top tier. Each scored in a stunning win at Arsenal that confirmed safety, with Kewell’s thumping goal another example of his match-winning magic.

His departure came that summer, as Liverpool won the race for his coveted signature. The £5m fee – one which still rankles with Leeds supporters – proved a paltry sum for a footballer deemed among the Premier League’s most exciting talents.

“I have great, great memories of my time at Leeds United but the opportunity came for me to move on and there were about seven or eight clubs that were seriously interested in me at the time,” he told Ladbrokes.

“But when I spoke with Gerard Houllier, the way he spoke about football was just phenomenal. His vision completely sold it for me.

“Don’t get me wrong, I had interviews with AC Milan and Arsene Wenger at Arsenal, these are clubs and managers that are very respectable and they put their pitches forward as well, but speaking to Houllier just got me over the line. He told me what he wanted to do with his Liverpool squad and I knew I had to be a part of it.”

Kewell’s first season was a success as he struck 11 goals in all competitions, forming an encouraging understanding with Michael Owen and Steven Gerrard as Liverpool looked to build a title-winning team.

A wonderful curling shot at Elland Road back in 2004 😍⚽ pic.twitter.com/PG6qnZjHoe

However, his moments on Merseyside proved only flickers and flashes of his Leeds best. For every moment of wondrous wing-play came another fitness issue. Seven surgeries in five seasons tells its own story.

He was part of the side that won the Champions League in 2004/05 and the FA Cup the following season, but on both occasions was withdrawn in the final after his wretched luck with injuries resurfaced. It was perhaps a microcosm of his time at Liverpool, a period which promised much but in truth delivered little.

A sublime finish from @HarryKewell to help us win the derby #onthisday in 2006 🤩 pic.twitter.com/YaWPtKfZmA

Post-Premier League he moved on to Galatasaray in 2008. His transfer to Turkey caused uproar at Leeds, with relations between the clubs hostile following an incident which saw two Leeds fans stabbed to death in Istanbul before a UEFA Cup semi-final between the sides eight years earlier. Kewell had been a part of the Leeds team beaten 2-0 that evening, one which saw the Turkish club’s supporters disturb the minute’s silence and their players refuse to wear black armbands.

Though league titles eluded him at Galatasaray, Kewell became a fans’ favourite with the supporters appreciative of his work-rate and quality. He scored 34 goals in 91 appearances, before the lure of home took the winger to Melbourne Victory.

While the A-League was gripped with ‘Kewell Fever’ as the man dubbed Australia’s greatest footballing export returned to the domestic league, it proved anti-climatic as Kewell spent just one season with the club before moving on.

It followed a trend in Kewell failing to truly win the affections of his homeland. While arguably the most gifted footballer Australia has produced, he was rarely received with the affection reserved for the likes of Tim Cahill, despite his Golden Boy status.

He won 58 caps for the Socceroos and scored 17 goals, forming part of the team who ended a 32-year wait for World Cup qualification in 2006. Influential in the inter-continental play-off win over Uruguay, his late equaliser against Croatia in the finals sent Australia through to the second round for the first time.

Harry Kewell sent Australia into the FIFA World Cup Round of 16 on this day in 2006. #GoSocceroos pic.twitter.com/b6tB5Ifh63

Kewell’s career came to a close with short spells at Al-Gharafa and Melbourne Heart, where upon announcing his retirement he was awarded the prestigious Alex Tobin Medal for his achievements in the game.

It’s a career that on reflection has been difficult to assess. In its infancy, it was electric, with no apparent ceiling on what this captivating talent from western Sydney could go on to achieve. The latter period was significantly less thrilling, like a series that has gone on perhaps one season too far, with injuries playing the part of a script writer out of ideas.

At his best he was the sprinkling of stardust to Leeds’ likely lads, a footballer who moved with poise and purpose, sending defenders stumbling out of his path with a drop of the shoulder. A wand is a somewhat overused terminology in football, but Kewell boasted a left foot – one capable of serving as a sledgehammer or with subtlety – to fit the description.

Trajectory can have a profound impact on legacy, but Kewell should be remembered as a fantasist of a footballer. He moved bums off seats and often ensured the admission was worth paying.