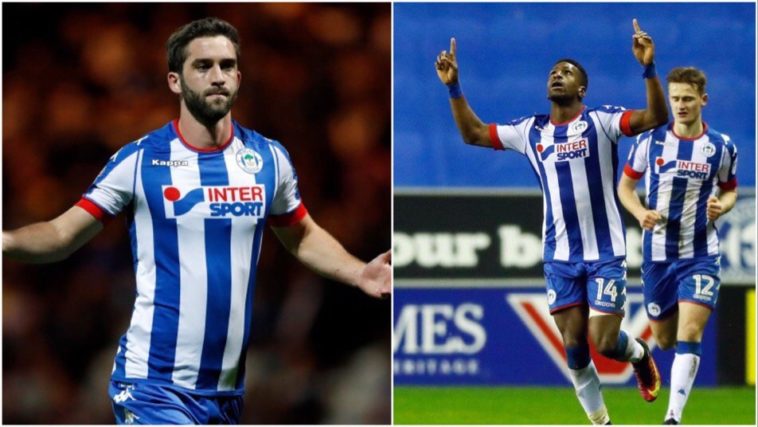 After just one season back in the EFL Championship, Wigan Athletic suffered relegation back to League One. The Latics return to the third-tier of English football, once more.

However despite their evident disappointment, perhaps there is light at the end of the tunnel. While the Latics were not firing on all cylinders this season, one has to prosper their possible strike-force next season. Will Grigg & Omar Bogle may prove to cause League 1 defences sleepless nights, if the pair are put up top together.

Will Grigg’s Proven League One Record

In the summer of 2015, Wigan Athletic signed Will Grigg for £1 million from MK Dons. Since then one could argue that the club have not looked back. Last season (2015/16) Grigg scored 28 goals in all competitions, including 25 league goals. The Northern Ireland international played a pivotal part in the clubs return to the Championship, as they were crowned League One champions.

However to say that Will Grigg’s season in the Championship was disappointing would almost be an understatement. Only scoring five league goals this season, Grigg did not live up to expectations to say the least. In addition to this, I also believe it proves that perhaps he is best suited to League One.

Prior to signing for Wigan Athletic, Will Grigg enjoyed his only season at MK Dons. He would go on to score 20 league goals for Milton Keynes, as they would also secure automatic promotion to the Championship that very season. In addition to this Grigg also notched up 19 league goals for Walsall in the 2012-2013 season.

On the final day of January transfer window, Wigan signed striker Omar Bogle from Grimsby Town. After having an impressive first half of the season with the Mariners, Bogle made the huge step-up to the Championship. He would make an immediate impact, scoring a brace on his full-debut against Norwich City. Still only aged 24, there is a lot more to come from Bogle.

From his time as a Grimsby Town player, Omar Bogle’s ability as a forward has been evident. He possesses the ability to use both feet in front of goal, which can be rare in some cases. Also one could elaborate that this ability alone provides Bogle a huge advantage, especially considering his dribbling ability with the ball at his feet.

Furthermore Bogle boasts bags of pace and energy as a forward, additionally strength as well. Not to mention that he does not shy away from free-kicks, of which he has scored a handful. If Bogle can work over the summer and develop a partnership, similar to the one he had with Padraig Amond at Grimsby, Wigan will not lack firepower next season.

Both Will Grigg and Omar Bogle are capable of finding the back of the net. Additionally both boast reasonable work-rates. They can be considered to be hardworking strikers.

One could elaborate that both play a very similar role as forwards, however there is versatility between the pair. This is something Wigan can take advantage of, providing they build a suitable team around the duo.

If the Latics can retain the services of Will Grigg, this should definitely be a partnership they should work with. While the duo may not have waved their magic in the Championship, there is no doubt League One could be set for a partnership made of goals.

Can the Latics return to the Championship at the first attempt? Has Will Grigg found his level in League One? Can the pair work together? Leave us your thoughts on Wigan.