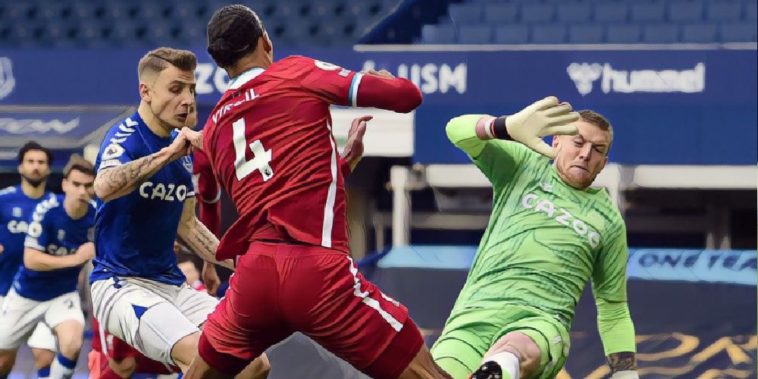 Georginio Wijnaldum has condemned Jordan Pickford’s ‘completely stupid’ challenge on Virgil van Dijk in the Merseyside Derby and admits he is ‘devastated’ by his teammate’s lengthy spell on the sidelines.

The centre-back’s absence is a huge blow to Liverpool‘s hopes of defending the title and Wijnaldum admits the manner of his teammate’s loss has left a bad feeling amongst the Reds’ players, criticising Everton’s bruising approach to the derby and branding Pickford’s challenge as ‘completely stupid’.

Speaking over in his native Netherlands ahead of the Reds’ Champions League tie against Ajax, Wijnaldum said: “We are still devastated and I think this was different from normal. The way it happened was really hard for us. Everyone still has a really bad feeling about it.

“When we were speaking with the players after Saturday none of the players had slept because of what happened with Virgil and, as I said, the way it happened. It is a really hard one to take and a hard one for the team.

“We are upset. The way Pickford went in on the challenge was completely stupid in my opinion. I believe he didn’t want to injury Virgil the way he injured him but the way he took the tackle basically he didn’t care about what happened after the tackle.

“We had a lot of games against Everton and in my opinion they take it way too far in the games we play against them. We know it is a derby and everyone wants to win a derby so sometimes you go a little bit over the top but it was too much. It was not only his tackle, we can talk about the tackle from Richarlison on Thiago which was also a nasty one. That is what bothered me the most and I think most of the other players as well.

“Accidents can always happen in football, you can be unlucky with a tackle and injure someone, but the way they were doing it is completely unacceptable. It makes it harder that they don’t get punished. In this case Pickford doesn’t get punished after seeing the videos.”