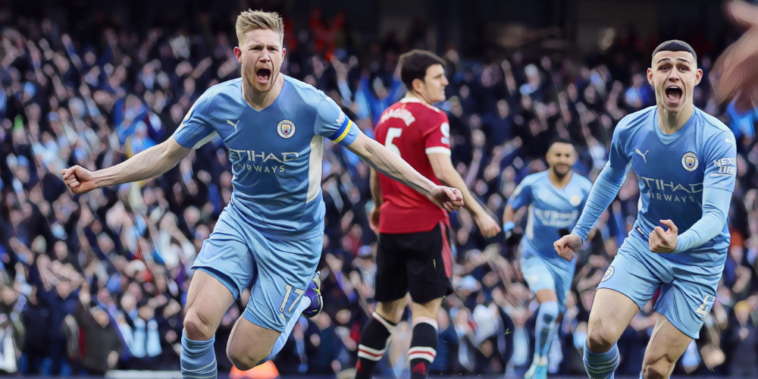 Scratch beneath the clickbait and online tribalism and you’ll find a rich vein of footballing discourse prevalent in the mainstream media and beyond. Thankfully, intelligent coverage of the game never went away, it has simply been marginalized somewhat by the constant speculation regarding a manager’s future or whether this club or that is in ‘crisis’.

Across websites, broadsheets, television and on the radio, hundreds of very informed and very passionate individuals discuss tactics and issues, as well as expertly analysing players and teams in a measured fashion, not coloured by bias. On occasion, books emerge, celebrating in considerable depth the merits of vintage sides or unparalleled achievements. From time to time a new documentary is put out doing likewise.

Long may all this continue.

Such deep-dives really come alive when a team breaks new ground, either in terms of their dominance or their methodology, so naturally with Manchester City presently scaling both of these heights the hundreds of very informed and very passionate individuals have turned their attention – and focused their analytical gaze – to the Etihad in recent years.

We are told that Pep Guardiola is a genius, obviously. We are told that all of it begins and ends with the Catalan grandmaster. Players meanwhile are lauded in isolation, especially a creative talent like Kevin De Bruyne who lends himself to poetic prose. As for the ways and means in which City have won three Premier League crowns in four years, averaging 91 points in the process, their possession-play is highlighted, in addition to their ferocious work-rate off the ball in order to win it back. Regrettably, these traits are usually accompanied by at least one mention of the club’s resources, as if wealth itself explains away the extraordinary football on display.

Throw in a jokey remark about how Ederson could probably play in midfield and a comment on ‘tactical fouling’ and that’s pretty much it when it comes to in-depth examination of one of the most complex, innovative, fascinating, and magnificent creations in the sport’s long history.

This, frankly, is more than a little odd, both in the scant coverage and the over-simplification. Indeed, considering that on our shores, before our very eyes, we are presently privileged to witness such an incredible side transform football for the better, it astounds and confounds.

When Guardiola arrived in 2016 and immediately installed a goalkeeper who played it out from the back his strategy was derided, with many taking great pleasure when the strategy went awry. Now, every keeper from Premier League standard down to Barrow and Oldham goes short, with both his centre-backs splitting either side of him to receive it.

When the managerial maestro insisted at the end of 2016 that he doesn’t ‘train the tackles’ once again the press-pack and public alike were downright scornful. Yet try and find a top-class team now that doesn’t have two ball-playing centre-halves and two skillful midfielders, stationed centrally, who previously would have been consigned to the safer pastures of the wings.

Last season Manchester City won the league at a cantor without a recognized centre-forward and may well do so again this term. That is an astonishing development in the game’s evolvement; a seismic reinvention of a long-established norm that might alter football’s template for the foreseeable future. Yet how many articles have been written on this? Two? Three? How many times has it been properly explored on the airwaves? It’s mentioned of course but only in passing, as if the analysis has already taken place many times over and it is now consigned to mere fact.

More so, the wanton over-simplification of City – this being that Guardiola is a genius who has the funds to buy the best players, making everything that follows somehow inevitable – misses out on so much pure madness.

In 2020/21, the Blues’ defence – featuring two ball-playing centre-halves who don’t practice tackling remember – kept clean sheets in 52% of their fixtures across all competitions. That is astonishing. Bar the brilliant Chelsea side of the mid-2000s, that is unprecedented. This season, to date, it is 57% in the league

Their game-management meanwhile is immense, a key aspect to their success and a faculty best illustrated by their 14 back-to-back victories to see off Liverpool in the 2018/19 title race. Five of those games ended 1-0, with each concluding stages of these tight, tense and must-win games navigated and plotted by players with nous to spare.

This acumen incidentally has been noticed by those hundreds of very clever columnists and opinion-makers only it is skewed entirely as a negative. City ‘suffocate’ the opposition. They are ‘machine-like’. Make of that what you will.

Furthermore, their unerring ability to dictate the tempo of games and control the narrative is aligned with a resilience that City is very rarely given credit for, a fortitude that completely contradicts the trope that used to do the rounds – that they could be ‘got at’. The champions last lost two on the bounce back in 2018 and it really doesn’t matter how good the manager is or how good the players are, it takes an elite mentality to accomplish that.

All told, this record-breaking, ground-breaking, and utterly transformative Manchester City side possesses more than enough qualities to fascinate writers and the rest of us until the cows come home. It should be pored over and cherished. It warrants excitement and spellbound attention. For books to be written and details savoured.