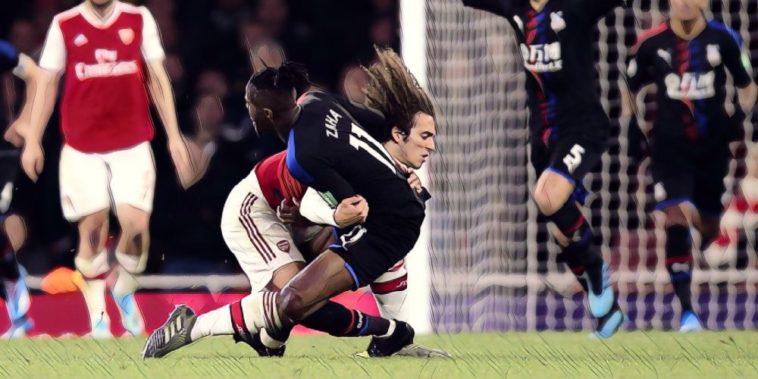 The Arsenal midfielder was cautioned for a high challenge on the Crystal Palace forward, wrestling Zaha to the ground to prevent a counter-attack in the final moments of a pulsating clash at the Emirates.

Cahill believes Guendouzi should have been dismissed for the challenge, the youngster the Gunners last line of defence as they side pushed forward for a late winner.

Moments earlier Arsenal had seen a late goal by defender Sokratis controversially ruled out by VAR, and whilst Cahill has praised the technology for overturning that decision, but was left wondering what could have been if Zaha had not been hauled down by Guendouzi.

Regarding the disallowed goal, Cahill said: “I think the lads were definitely adamant there was something at the near-post and I think that is where VAR is very good.

“Because when there are a lot of bodies in the box and there is a big incident like that it was easily missed back in the day so that is where VAR comes in and is very good because that is a huge moment – to go 3-2 down with five minutes to go it would be very difficult for us to come back.

“They are big moments and I think the right decision was given and we could have nicked it at the end with the obvious rugby tackle on the half-way line which was a professional foul but if Wilf skips away from there then who knows what happens at the end?”

Guendouzi, however, was unapologetic, admitting he ‘had to’ make the challenge to prevent Zaha from racing away for a clear goalscoring opportunity.

“I had to foul Zaha at the end, otherwise he is through on goal on his own,” Guendouzi told Arsenal.com.

“I’m the last defender but I’m far from our goal as well. I had to do it.

See also – Premier League Team of the Week for Gameweek 10