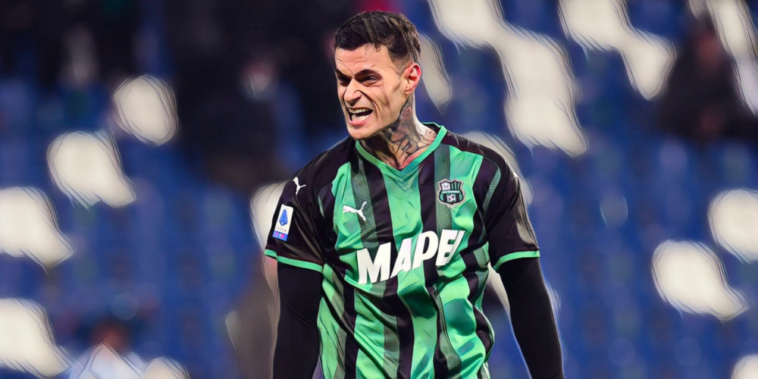 West Ham are preparing an opening offer for Sassuolo striker Gianluca Scamacca, as the club increase efforts to sign a centre-forward.

The Hammers are set to make an initial bid of around €40m (£33.75m) to sign Scamacca, who scored 16 league goals during an impressive breakthrough season for Sassuolo in 2021/22.

David Moyes wants to bring in a centre-forward before the closure of the transfer window as West Ham look to provide competition for Michail Antonio, with Scamacca having emerged as a leading transfer target.

Paris Saint-Germain have also been linked with a move to sign the 23-year-old, but are reluctant to meet Sassuolo’s asking price in the region of €50m (£42.1m).

Scamacca trailed only Ciro Immobile for goals among Italian players in Serie A last season and has broken into the national side, earning seven caps since his debut for the Azzurri in September 2021.

West Ham are preparing an opening, verbal bid around €40m for Gianluca Scamacca. He's in the list alongside Armando Broja, who just joined Chelsea squad in the USA & there's lot of competition. 🇮🇹 #WHUFC

Sassuolo want €50m for Scamacca. PSG, not intentioned to pay that much. pic.twitter.com/y30asN6WCn

West Ham also retain an interest in signing Armando Broja from Chelsea, though face competition from a number of Premier League clubs including Everton, Newcastle and Southampton.

Broja scored nine goals during a loan spell at Southampton last season and the 20-year-old is believed to be valued in the region of £30m.

West Ham’s summer business has already included the arrivals of Nayef Aguerd, Flynn Downes and Alphonse Areola, though more arrivals are expected at the London Stadium.

In addition to signing at least one new centre-forward, the Hammers are keen to bring in an additional midfielder and have also been linked with Hoffenheim left-back David Raum and Watford winger Ismaila Sarr.