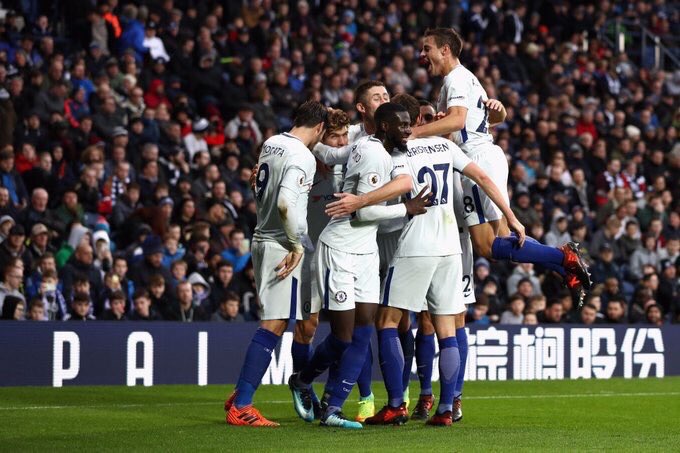 Eden Hazard, Álvaro Morata, and Cesc Fàbregas attack early as Chelsea run away with a 4-0 victory over West Bromwich Albion on Saturday.

Morata’s goal after cleaning up the rebound in the 17th minute was enough for the win, but it didn’t stop Hazard from netting a brace with Fàbregas pulling the strings with two assists.

Here are five things we learned from Chelsea’s 4-0 win over West Brom.

Hazard puts on a clinic at the Hawthorns

The Belgian was confident today, and it shows in the goal tally. Hazard is a capable scoring threat, but he usually looks for the pass instead of the back of the net. He is a true team player, but today was his show for the audience at the Hawthorns.

You could tell he wanted to make a statement in the match, especially after an inadvertent stamp from Gareth Barry that went uncalled. Boos and jeers from the home fans rained upon the winger after he next received the ball, but Hazard made the most fluid of turns, opening up space for a hard shot that Ben Foster couldn’t hold on to, leaking out to Morata finished the chance.

Hazard didn’t stop there, and he punished the West Brom defence for leaving him unmarked. He constantly got in between the lines and behind the defenders, enabling him to score a brace before being substituted off to a standing ovation of the away fans.

N’Golo Kanté’s return from injury allowed for a more permanent switch to a 3-5-2 formation with a midfield trio Fàbregas, Kanté, and Tiémoué Bakayoko. This change has helped the Spanish magician to recover from some bad form as of late.

A triangle within the midfield helps Chelsea in recycling possession. The extra protection from Kanté and Bakayoko gives Fàbregas more time to pick out the perfect pass to Hazard or Morata. The position of Fàbregas is also more fluid in this formation, where he can form a triangle with the two forwards as well as the other two midfielders. Defensive cover is adequate with the two Frenchmen covering enough ground to make up for a lack of pace in Fàbregas.

Hopefully the times of a Chelsea midfield that’s overrun by active opponents are over. This is Fàbregas at his best, and replacing him with Danny Drinkwater later in the game fits perfectly with the game plan as well.

Antonio Conte announced that David Luiz was included in the squad for this match after being left out against Manchester United. However, Andreas Christensen still earned the start and played the full 90 minutes, while the veteran center-back stayed on the bench.

Christensen’s game can be described by three C’s: cool, calm, and collected!

His two-year loan at Borussia Monchengladbach as a starter readied him to anchor the Chelsea defence this season.

His current form is similar to David Luiz of last season. As the middle center-back, their jobs are to be sweep away any danger as the last line of defence before the goalkeeper, and to pick out forward passes to midfielders. Even when pressured by forwards like Salomón Rondón, Christensen calmly protected the ball from danger and started attacks.

I think David Luiz would play well right now given the team’s current form. The Brazilian played without Kanté which caused a lot of defensive problems. Christensen has started in a better situation to help his case, but there is no denying that Christensen has passed the point of raw talent. He deserves his shot right now as a Premier League starter for Chelsea. If it ain’t broke, don’t fix it.

The end of Pulis at West Brom?

Some Chelsea managers have lost their jobs after losing to West Brom in Premier League action. André Villas-Boas and Roberto Di Matteo were both sacked, but this time it might be a West Brom manager losing their job after a defeat to Chelsea.

West Brom is now one point away from the relegation zone after losing four matches in a row. The season has been forgettable for the Baggies, and Tony Pulis should be on the hot seat after losing to Chelsea with the owner Lai Guochuan watching from the stands.

Pulis is usually the manager clubs call upon to be saved from relegation, but West Brom might need to look for someone else to steady the ship as they look to stay in the Premier League.

There were two yellow cards in the span of five minutes. Fàbregas and Rondón were both booked by Jonathan Moss for simulation after “diving.”

There was accidental in contact in both instances, though I wouldn’t call either of them a foul. However, both players fell because there was contact, not because they were diving.

Moss could have easily not blown his whistle and allow the match to continue. Those yellow cards were uncalled for since there was no simulation.

Maybe he was trying to make up for missed calls in the first half, like the stamp on Hazard. Either way, two wrongs don’t make a right, and Moss was largely wrong for most of the match.