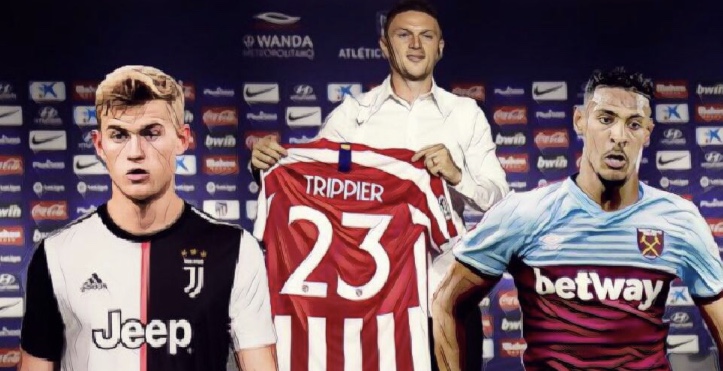 A recap of the past week in the transfer market, including Kieran Trippier’s shock exit from Spurs, West Ham somehow grab themselves a top-quality striker, Matthijs de Ligt picks Juventus over Barcelona, and Fabian Delph leaves City.

Remember when it was a big deal for a club to break its own transfer fee record? It used to be a big event that garnered plenty of discussion about whether the player was worth it, would said player crumple under the pressure of being the team’s most expensive player, and if the game was finally gone.

Now club records seem like their broken every other week. Sheffield United did just that in fact, following up their £8m (€8.9m) purchase of Callum Robinson with buying Lys Mousset for £10m (€11.1m).

So far this year Aston Villa, Brighton, Leicester City, Manchester City, Tottenham, West Ham United and Wolves have all broken their respective records this summer. Some teams have broken it multiple times in the last two windows, but every current top tier team has done so at least once in the last four years.

Our weekly transfer round-up is brought to you in association with our friends at Carling, who’ve just launched a superb new inter lockable glass that allows you to carry four pints easily. Now if that’s not an innovation we can all get behind, we don’t know what is!

Well, who saw that one coming? Following last year’s star turn for England at the 2018 World Cup, it would have been impossible to envisage Kieran Trippier leaving Spurs for just about anywhere, let alone Spain, for twenty million pounds.

The full-back has had a tough year since then, however, becoming more of a liability for his team down the right-hand side. At 28 years of age, this was probably the last chance for the club to get a decent fee for him, so it’s easy to understand why Mauricio Pochettino let him go at this point.

Why Atletico Madrid bought him is another question entirely. While it seems an odd move, someone like Trippier adds a new dimension to their counter-attack with his ability to get up and down the wing.

The defender’s crossing ability was undoubtedly one of the key attributes that attracted Diego Simeone to the player. In a pre-season friendly against Numancia this week, the ball was repeatedly played out to him to cross into the box. A partnership with Alvaro Morata this coming season could bear a lot of fruit for the La Liga outfit.

There’s also the fact that Atleti usually play with a more traditional flat-back four, whereas Pochettino would occasionally flit between four and five at the back, meaning Trippier should be afforded more cover when he bombs forward.

Spurs are unlikely to buy a direct replacement in this window; Kyle Walker-Peters will likely get more minutes now, while Pochettino still sees Juan Foyth as a viable option at full-back despite his natural position being in the centre of defence. And Eric Dier has previously played there, of course.

They say if you can’t beat ’em, join ’em. Not Matthijs de Ligt; he helped Ajax beat Juventus in the Champions League quarter-finals last season and joined them anyway, in the process averting the well-worn path of players leaving the Amsterdam outfit for Barcelona.

Of course, the Dutch defender could still end up in Catalunya one day and that is the beauty of this move for the 19-year-old. He is joining one of the biggest clubs in Europe, one that will likely challenge for the Champions League next year, and be well compensated for it.

And if the time is right, then he can make the jump to Barça. Whereas if he had moved to the Spanish club now and left in a few years, pretty much anywhere else is viewed as a step down. This way he still very much has the possibility of upward mobility while winning trophies in a star-studded team.

All of the major transfers involving Irish players this summer

At what point do we start to take West Ham seriously as a club that will challenge the top six cartel? Because they are making the kind of moves that are putting them in that conversation.

Firstly, the Hammers trimmed all the fat off the bones: they finally sold Marko Arnautovic, and let go of Andy Carroll, Adrian, Lucas Perez, and Samir Nasri.

Then they went and got Pablo Fornals, one of the most exciting midfielders in Spanish football, to partner up with Declan Rice and Felipe Anderson. And that was before they bought this guy:

Sebastian Haller was a key component of Eintracht Frankfurt’s attack last season, when they reached the semi-finals of the Europa League, only to fall to Chelsea, and narrowly missing out on Champions League qualification.

Judging by his height you might assume on first glance that the Frenchman is your typical target man, but he is much more agile than you think and is happy to drop a bit deeper to help create chances. He made nine assists in the Bundesliga in the last campaign.

Quick and skillful, Haller is a goal scoring threat too, scoring 15 in the league and five in Europe. Although I would still have one or two question marks over their defence, West Ham’s newest striker could be the man to shoot them to greater things.

Not exactly the most headline-grabbing transfer this summer, but it marks another addition to Everton’s stacked midfield following the permanent acquisition of Andre Gomes.

Alongside the Portuguese, the Toffee’s have Gylfi Sigurdsson, Idrissa Gueye, Morgan Schneiderlin, Bernard, Tom Davies and, now, Fabian Delph. It probably means that either Muhamed Besic or James McCarthy will be sold on, if not both.

For Delph, it marks a fairly predictable turn in his career. The midfielder joined Manchester City in 2015 from Aston Villa, after he infamously insisted he was staying put, but there was never a realistic expectation that he would be a regular starter.

Indeed, aside from a run as a stand-in full-back two years ago under Pep Guardiola, Delph hasn’t seen much action; he’s played just 57 Premier League games over four seasons. Everton will be praying he can rediscover the kind of form that won him that move to City in the first place.

All transfer fees via Guardian.