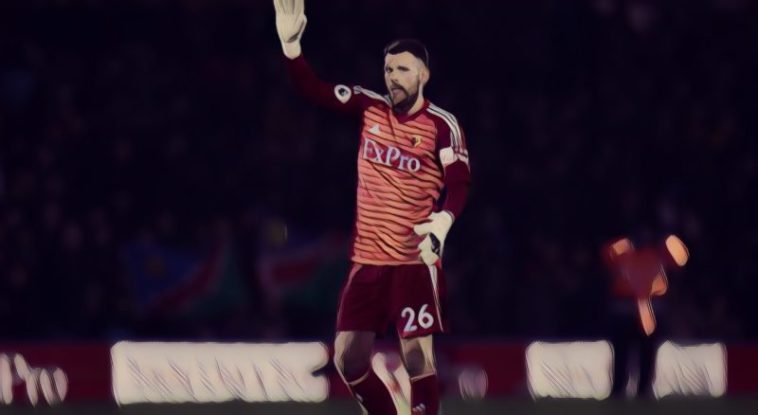 Arsenal sealed a crucial win in their quest to finish in the top four this season, beating Watford 1-0 tonight at Vicarage Road.

Pierre Emerick-Aubameyang put the Gunners ahead on 10 minutes when he charged down Watford ‘keeper Ben Foster’s attempted clearance with the ball rebounding off the Gabonese striker and into the Hornets net.

It seemed that Arsenal would then stroll to a comfortable win when Watford captain Troy Deeney was shown a red card for a forearm smash into the face of Lucas Torreira just a minute after Aubameyang’s goal.

However, Watford looked much the better side despite being down to ten men and on the balance of play Javi Gracia’s men were unlucky to come away from the game with nothing.

Speaking after the game 36-year-old Foster revealed that he was gutted for his teammates and also said that he had apologised for his mistake, even honestly admitting that he isn’t cut out for playing the ball out from the back like so many modern goalkeepers do.

“I am gutted for the lads. they were brilliant. We were the better team, pushing for it. Arsenal were happy to hit us on the counter,” Foster told Sky Sports.

“I should have just Cruyffed him to be honest. I’ve said sorry to the lads. I have tried to drag it on to my left and pass it out but before I knew it he (Aubameyang) was bloody on me. He is too quick. I have to do it quicker. In hindsight you have to get rid as quick as you can, even if it goes into row Z.”