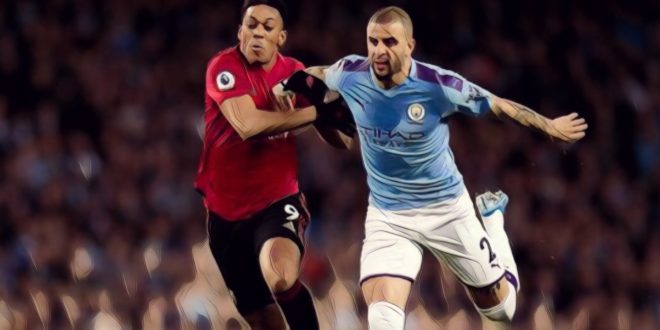 Manchester City’s slim hopes of catching Liverpool and regaining their Premier League crown all but ended tonight after they slipped to a 2-1 defeat to bitter rivals Man United at the Etihad.

Pep Guardiola’s side simply couldn’t handle United’s pace on the counter attack and were 2-0 down by half-time after goals from Marcus Rashford and Anthony Martial.

Despite, City pilling on the pressure and Nicolas Otamendi scoring an 85th minute header, the Citizens fell to their fourth defeat of the season and now sit a whopping 14 points behind league leaders Liverpool.

City’s form this season has been in stark contrast to the previous two campaigns and Walker suggested that it is not Guardiola who is to blame for their slump, but rather the players.

32 – This is Pep Guardiola’s worst points return after the first 16 matches of a top-flight season in his managerial career (32 pts). Sluggish. pic.twitter.com/Wvd8Uqzlzy

“Us as defenders need to hold our hands up. We need to keep clean sheets and strikers maybe need to put more away,” Walker told Sky Sports.

”They had a game plan and it worked. They have quick players in quick areas and they are going to hurt you on the counter. Credit where credit is due, they stepped up today. Fair play.

“Can’t fault the manager. He has won numerous trophies. I can’t put my finger on it.

”It is going to be difficult, Liverpool are on fire. They are getting wins and we are not. It is a big gap but we will fight until the end.”