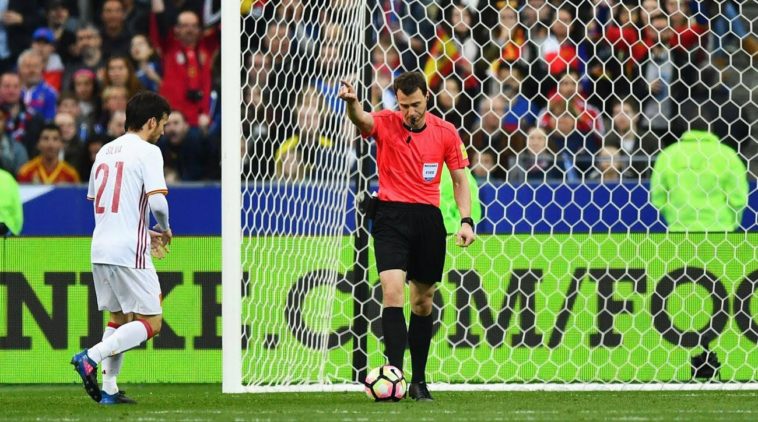 It was a highly anticipated game full of some of the biggest talent in the game right now. From Spain’s experience of Sergio Ramos, Andres Iniesta and David Silva, to France’s exuberance of Kylian Mbappe, Moussa Dembele and N’Golo Kante.

The game finished 2-0 to the Spanish with second half goals from David Silva and Gerard Deulofeu.

However, two of the biggest talking points in this game came from refereeing errors. One goal was wrongly allowed and another wrongly chalked off. An offside decision was missed by the linesman allowing Antoine Griezmanns header to give France the lead in the second half. Later, Gerard Deulofeu’s goal was ruled out for offside. Again, a wrong decision from the linesman.

Ok, here we go, this is the amount of time it took the video assistant referee to overrule the offside decision and allow Deulofeu's goal pic.twitter.com/kTLn8LgQdD

If it weren’t for the Video Assistant Referee, this game would have finished 1-1. However, after around 30 seconds of deliberation for each decision, the referee was able to overturn the linesmans flag. Hallelujah common sense prevails.

However, here in the UK during the post match analysis there was something very strange. Paul Ince, former Manchester United, Liverpool and England midfielder said he didn’t want the technology.

Is this man out of his mind?

His reasons for this opinion was that both calls ruined the atmosphere inside the stadium. Antoine Griezmann celebrated his goal emphatically, as every other French person in the stadium. Scenes of joy, only to be ruled out by some faceless man in van watching on TV. Yes. The atmosphere took a hit after having the goal ruled out, but it would have done also if the linesman did his job in the first place.

He used the same argument for Deulofeu’s goal that was eventually allowed.

Why it needs to be introduced, now!

For years, fans, players, manager and pundits alike have been whinging about incorrect decisions. Now that the technology is in place (on trial), we have someone sat in the media saying he would prefer the outcome of this match to be alterred to maintain the atmosphere rather than the game be officiated correctly. Wow.

Imagine if this game was the World Cup final in Russia next year. This game would have ended 1-1 and going to extra time rather than Spain being rightfully crowned champions. Can we really allow that to happen? No we can not!

For long enough we have put up with inadequate standards of officiating, well now we don’t have to.

I totally have huge sympathy for those men in the middle. The game is so quick and the margins so fine. The UHD camera’s around the stadium allow us to marvel at the beauty of the game, but they highlight the mistakes too. Being an official is a thankless task, so let’s give them the help that they both need, and deserve.

My message to FIFA, UEFA and the FA is, the system works! Get it ratified and get it in operation around the world as quickly as possible!

Did you watch the game last night? What did you think to the Video Referee trial? Leave us a comment below or get in touch via twitter.