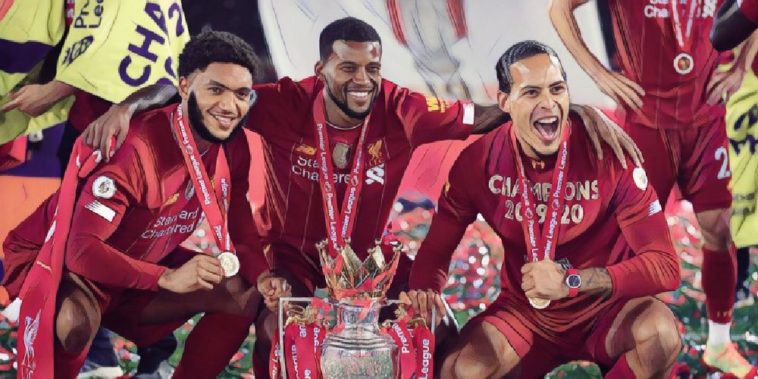 Liverpool were officially presented with the Premier League trophy following the Reds’ entertaining 5-3 victory over Chelsea on Wednesday night, with captain Jordan Henderson lifting the trophy to end a three-decade wait for a top-flight title.

Jurgen Klopp’s side have bounced back from narrowly missing out on last season’s title to be crowned champions in record-breaking fashion, sealing the championship last month with a record seven games to spare.

Van Dijk described his side’s success as a ‘fantastic feeling’ and admits it is a ‘dream come true’ for the whole squad to finally get their hands on the prize.

“We finally get our hands on the Premier League trophy and it’s a dream come true for all of us,” the defender told Sky Sports.

“It has been quite a long wait for all the Liverpool fans around the world and for us obviously.

“It’s just a great feeling, a fantastic feeling to say that I’m a Premier League champion and the rest of the boys as well.”

Liverpool’s remarkable consistency this season saw the club enjoy the best ever start to a season amongst Europe’s top five leagues and Van Dijk has credited the Reds’ relentless run as the key factor behind their success, revealing the club used last season’s disappointment as motivation to be crowned champions this term.

“It’s very difficult to stay consistent, as we were this year,” he added.

“When we played the last game of the [last] season against Wolves here, Brighton were losing and in the end City won it there. Obviously we were disappointed but it was like, ‘We’re going to get it next year.’ That’s the feeling that we all had.

“The focus that the manager, especially, has brought in is that each game that’s ahead of you, that’s the most important thing. We’re not going to focus on what’s two weeks in advance, we focus on the game ahead of us. If it’s Wednesday or Saturday, we don’t think further. That mentality helped us a lot.

“We always find a way to win, we’ve been doing it all season. We had big results – Aston Villa away and Wolves away – those kind of moments where we just dig deep, find a way and got the result that we needed.

“We’re out there on the pitch, everyone gets along with each other, on the pitch everyone is there to help each other, everyone wants to fight for each other. That’s the least that the Liverpool fans want to see from us and that’s what we all want from ourselves, too.”