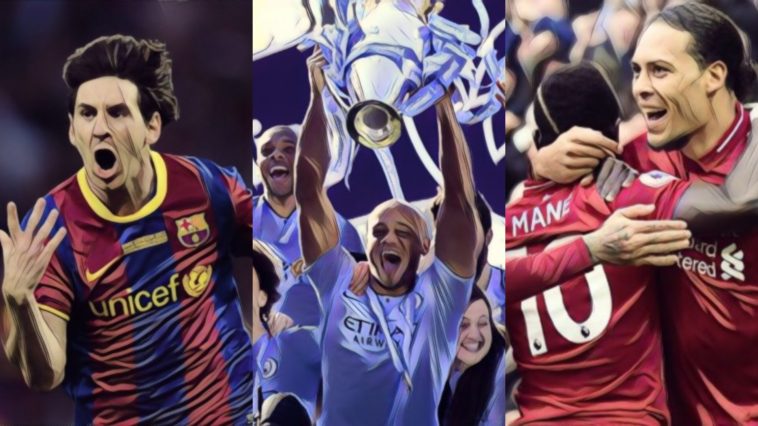 Liverpool’s current run is among the most rip roaring starts to a league campaign we have ever seen in Europe’s top five leagues.

The Premier League champions in waiting have joined an elite bunch of clubs with their astonishing run of form this season, propelling them into the record books.

Curiously, all the teams included here are from the past decade, which is perhaps a symptom of how the very top levels of European football are becoming increasingly stratified these days.

Are Liverpool on their way to becoming a so-called super club like the others on this list? And how does their record compare with the best?

The best ever starts to a league campaign in Europe’s top five leagues:

Barcelona’s first league campaign without Pep Guardiola in charge went about as smoothly as they could have hoped, with the Catalan club winning the title with 100 points under new manager Tito Vilanova, while Lionel Messi was the top goalscorer with an outrageous 46 goals.

La Blaugrana were in 1st position in the table throughout the entire campaign and the only blemishes in the opening 21 games were a 2-2 draw with Real Madrid and a 3-2 defeat to Real Sociedad, and they only dropped a further nine points thereafter.

Barça were knocked out of both the Copa Del Rey and Champions League at the semi-final stage, the latter of which saw them suffer a humiliating 7-0 defeat on aggregate.

A landmark year for Barcelona started off rather inauspiciously, as they lost 2-0 at home to Valencian minnows Hercules in the second round of fixtures. They soon remedied that shock with a 30-game unbeaten run in the league, going on to win La Liga and the Champions League in 2011.

The standout performance of the campaign was a thumping 5-0 victory over Real Madrid at the Camp Nou, which saw Barça leapfrog their bitter rivals and they didn’t relinquish top spot for the rest of the season.

A truly dominant force in Serie A this past decade, Juventus were even more aggressive in their bid to win the Scudetto last season after they spent €100m on Cristiano Ronaldo.

On top of the table for all but the first gameweek of the season, the Old Lady didn’t taste defeat until the 28th game of the campaign, falling 2-0 away to Genoa. They won all but two of their opening 21 matches, drawing to Atalanta and Genoa.

Juve ended up winning the title with an 11 point lead over Napoli, going undefeated at home while Ronaldo was their top scorer with 21 goals.

The longest unbeaten runs of the Premier League era

Pep Guardiola’s first campaign in charge of Bayern Munich saw the German side play a fluid, possession style game that brought them great success on the domestic front, winning the league and cup double.

The Bavarian outfit won 19 and drew two of their opening 21 games in the Bundesliga in 2013/14, making them clear leaders of the table on 59 points. They went on a 19-match winning streak in the middle of the season and were close to going the entire campaign undefeated, but suffered consecutive defeats to FC Augsburg and Borussia Dortmund in April.

Bayern ended the season on 90 points, 19 ahead of nearest challengers Dortmund, although they were annihilated 5-0 on aggregate by Real Madrid in the Champions League semi-finals.

And now it’s time for the third Pep Guardiola team on this list – it’s almost as if he’s a world-class manager. Although it also points to the increasing financial dominance of a select few clubs in Europe, as mentioned earlier.

Manchester City struggled to get going in the Catalan’s first season in charge, finishing 15 points behind Premier League winners Chelsea in third place. But with a couple of key signings, they romped to first place the next year, finishing 19 points ahead of second-placed Manchester United.

City were widely tipped to emulate Arsenal’s Invincibles of 2003/04 and go the entire season unbeaten, only to lose two games to Liverpool and Man United respectively.

It’s very much the norm for PSG to completely dominate French football these days, having won six of the last seven league titles, and the 2018/19 campaign was no different.

The Parisian outfit shot out of the blocks with 14 consecutive victories to start the season, and didn’t suffer their first defeat until February when Lyon bested them 2-1.

The French side infamously lost to Man United in the Champions League round of 16, though, despite comfortably winning the first leg at Old Trafford 2-0. Once they were knocked out of Europe, the squad seemingly took a collective disinterest in the rest of the season, winning just three of their final nine league matches, before losing the Coupe de France final to Rennes on penalties.

Why Harry Kane needs to sit out until next season

Liverpool’s most recent win over Spurs puts them at the top of this list, having 20 of their opening 21 games of the Premier League season, the first time any side in Europe’s top five league’s has ever done so.

It’s only January and the title looks wrapped up already, and while Jurgen Klopp says he doesn’t care about records or making history, but they could very well break several that Man City set in 2017/18 and match Arsenal’s unbeaten campaign in 2003/04.

While the Reds are cruising ahead of everyone else, it’s interesting to note that they haven’t been steamrolling their opponents – ten of their victories have been by a single goal.