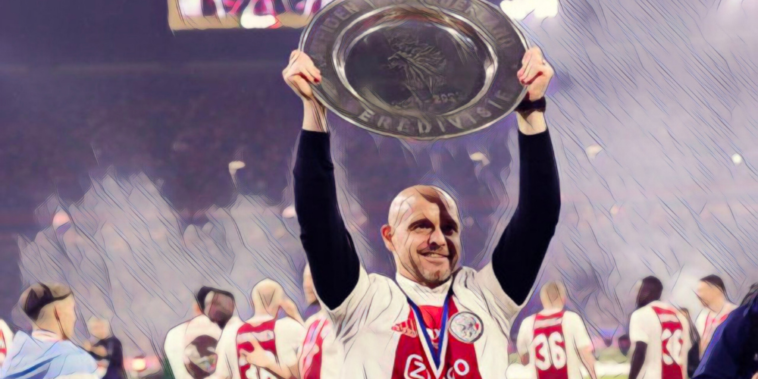 Edwin van der Sar has sent his best wishes to Erik ten Hag ahead of his move to Manchester United, after the departing manager led Ajax to the Eredivisie title.

Ajax wrapped up a third consecutive Dutch league title after thrashing Heerenveen 5-0 at the Johan Cruijff Arena on Wednesday, with Ten Hag celebrating another Eredivisie title in his last home fixture in charge of the Amsterdam outfit.

Sebastien Haller was among the scorers as Ajax raced into a three-goal lead inside the opening 38 minutes, before further goals from Brian Brobbey and Edson Alvarez secured a convincing win and a record-extending 36th domestic title.

Ten Hag departs Ajax having won three titles after previous successes in 2018/19 and 2020/21 and the club’s chief executive, Van der Sar, paid tribute to the departing Dutchman in the post-match celebrations.

Van der Sar – who spent six seasons at Manchester United as a player – thanked Ten Hag for his achievements and wished his compatriot ‘all the best’ at his former cub.

“Erik.. sometimes I thought ‘you are a weird man’, but you surpassed all expectations,” he said on the pitch after the win.

“You will leave for a club that is close to my heart. I wish you all the best there.