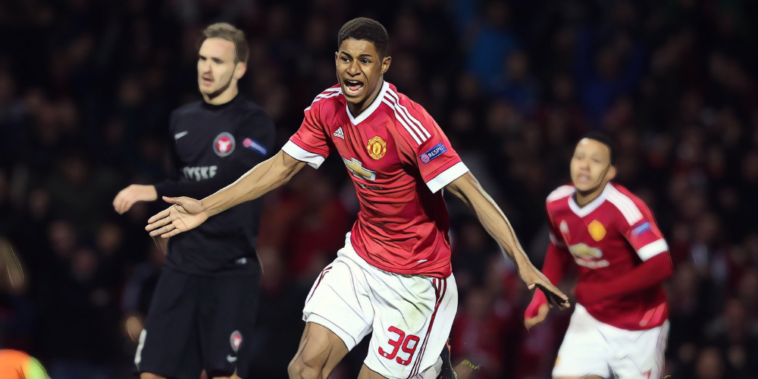 It is believed that fewer than 1% of the prospects who begin in academies as children make it to becoming a professional footballer, such are the intense demands and competition to earn a career in the sport.

Fewer still make it at the very elite level, with only a fraction representing the world’s biggest clubs in the senior side.

The road to becoming a footballer is one that requires patience and potential, talent and temperament. Throw in a lot of luck and the right opportunity and it soon paints a picture of the seismic challenge.

Every so often opportunity arrives when least expected, with the debut of Marcus Rashford a moment in which one ninety minutes launched a career.

Louis van Gaal was under pressure as Manchester United faced Midtjylland in the 2015/16 Europa League, the Red Devils beaten at Sunderland in their last league fixture before crashing to defeat to the Danish minnows in the first leg of their Round of 32 tie.

The experienced Dutch coach was feeling the increasing heat of the Old Trafford hot-seat, with his hopes of turning round the side’s fortunes not helped by an extensive list of injuries.

Rashford had originally been named among the substitutes for the return fixture, the 18-year-old an unknown among most of those outside of Man United circles.

His first-team debut came sooner than expected, however, as an injury to Anthony Martial in the warm-up and a lack of senior alternatives saw the teenager thrust into the starting side.

Having been born and raised in South Manchester as a boyhood fan of the club, it was surreal moment for the debutant as he walked out of the tunnel at a packed Theatre of Dreams.

“When I was walking out I saw so many people that I knew in the crowd. It was the weirdest experience ever. I just saw so many faces that I recognised,” Rashford reflected when speaking on the UTD Podcast.

The game itself began in disastrous fashion for the home side as the Danish champions – leading 2-1 from the first leg – opened the scoring through Pione Sisto and increased their advantage.

Facing an embarrassing exit, United rallied and equalised before half-time through Nikolay Bodurov’s own goal. However, Juan Mata’s missed penalty left the visitors in control.

Van Gaal’s side headed into the interval knowing two goals were needed to progress and it was their surprise package in attack who soon took centre stage.

Rashford’s dream debut was realised as he slammed home a confident finish, arriving into the box to side-foot Mata’s cut-back into the net.

Van Gaal had implored the teenager to focus his attentions centrally, having watched as the forward – a whirl of nervous tension and excitable energy – had used his adrenaline to chase lost causes across the pitch.

Knowing his best route to success was between the posts, the advice of his coach paid off as the forward timed his run to perfection and finished with the manner of a seasoned professional.

Barely afforded time to calm his breath and take in the realisation of a childhood ambition, a second goal soon arrived. Again the movement was intelligent, momentarily standing still to find space, before arriving to cooly convert Guillermo Varela’s cross to the back post.

Rashford’s double had transformed the tie and the Red Devils went on to find further strikes from Ander Herrera and Memphis Depay, securing a safe passage to the last 16 with their striking starlet taking the headlines.

Not since Wayne Rooney had tormented Fenerbahce over a decade earlier had Manchester United enjoyed such an exciting emergence, as Rashford became an overnight sensation at Old Trafford.

“That was probably the best night of my life,” Rashford said when discussing his dream debut to the UTD podcast in 2020.

“I just sort of lost myself on the pitch that day. United always say, when you’re growing up, to express yourself on the pitch. They’re the ones that taught me that and I think that’s why we have so many youngsters come through because, without knowing it, they’re ready to play. That’s credit to United and the system.”

Rashford had impressed for club and country at youth level, but there is never a guarantee how even the brightest prospects will adapt under the bright lights of the biggest stages.

“You can’t predict what the outcome, the reaction will be when somebody goes out in front of 75,000,” he said to the Guardian.

“When you do like Marcus did, it gives the coaching staff such a thrill. You see his performance, how well he did, and think: ‘Wow! I wouldn’t have predicted that, he’s just played out of his skin.’ It is almost like an out-of-body experience – that’s what Marcus did.”

Rashford had been granted a small chance to knock on the door of opportunity at Manchester United, but he instead proceeded to barge through it with a combination of inner self-belief and natural talent.

Three days after his spectacular emergence he was at it again, marking his Premier League debut with another devastating double as Arsenal were beaten 3-2 at Old Trafford.

He ended the 2015/16 season with eight goals in 18 appearances at club level, before celebrating his England debut with a goal after just three minutes against Australia, becoming the youngest debut scorer for the Three Lions.

Those performances earned Rashford a place in the England squad for Euro 2016, a meteoric rise as he headed to a major international tournament just four months after his club debut.

Some will say the stars aligned, whilst others will credit the forward for seizing his chance when it came. He would not have even made the squad had the Red Devils not had 14 players out injured, whilst a rejected loan approach from Crewe and Anthony Martial’s ill-luck with his hamstrings all played their own part in Rashford’s rise.

What had threatened to be an awful night against Midtjylland instead proved one to savour, as the local lad turned into an instant hero.