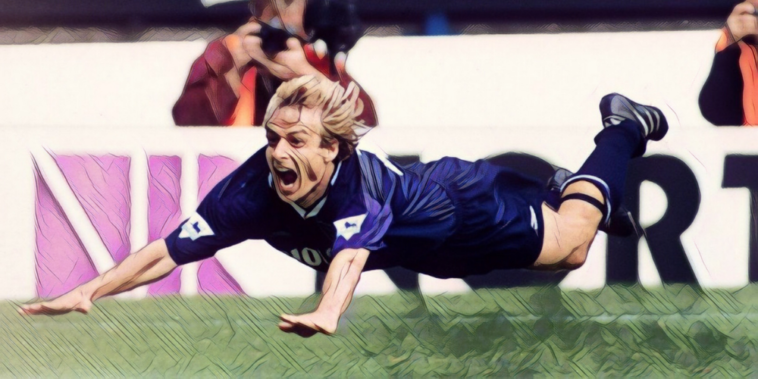 The formation of the Premier League transformed the landscape of English football forevermore, a revolution that turned the nation’s top tier into the richest and most-watched football competition on the planet.

Fast forward to the present day and the Premier League is a cosmopolitan collection of some of world football’s biggest names, but before the rebranded behemoth of a division could run, it first learned to walk.

The early nineties saw the first real star names from foreign soils arrive into the English game and Klinsmann’s arrival at Tottenham was amongst the very first instances of a marquee import choosing the Premier League as the destination of his choice.

Whilst names such as Eric Cantona and Peter Schmeichel were in the infancy of forging legendary status in the Premier League, Klinsmann arrived as the finished article – one of world football’s finest with an extensive collection of honours behind him.

Far from the celebrated signing to lead the Premier League’s foreign invasion however, his move to north London was greeted with apprehension.

Klinsmann had formed part of the West Germany side that had eliminated England from the 1990 World Cup, a tournament which saw his reputation – in the British media at least – plummet.

Accused of simulation, the forward was involved in an incident that saw Argentina’s Pedro Monzón become the first player in World Cup final history to be sent off, following a theatrical tuck and tumble from Klinsmann.

Scepticism was understandably high, but it took little time for the perceived poster-boy of all things anti-English to charm his way into the affections of the Premier League public.

His first press conference upon signing for Spurs saw Klinsmann humorously enquire about diving schools in London, taking a comical approach to the predictable questions about his sporting morality.

It was a snippet of the charisma that would aid his battle to win over the doubters, before his first appearance in a Spurs shirt helped catapult Klinsmann from pantomime villain to terrace hero.

The north Londoners travelled to face Sheffield Wednesday on the opening day of the Premier League season, with Klinsmann named alongside Teddy Sheringham in the starting side at Hillsborough.

The game itself proved a classic, as the two teams largely neglected their defensive responsibilities and went toe-to-toe in South Yorkshire.

Sheringham and Darren Anderston combined for both goals as Spurs raced into a two-goal half-time lead, though the spirited hosts fought back to level after the break through Dan Petrescu and a Colin Calderwood own goal.

Nick Barmby restored the visitors advantage with an enterprising run and powerful drive, before the moment the travelling contingent of Spurs supporters had been waiting for.

Anderton’s delivery from the right found Klismann in space, with the marquee arrival rising to power home a bullet header at the back post and open his account in English football.

The goal was textbook Klinsmann, manoeuvring room inside the area before making no mistake, a fine leap followed by an even better finish to put daylight between the sides.

Whilst the goal was good in isolation, it is the celebration that is the moment that truly lives long in the memory.

Wheeling away in delight with arms outstretched, Klinsmann threw himself to the ground in a diving motion, an act of self-deprecation that showed English football fans that the old enemy was quite alright.

Klinsmann’s goal proved to be the match-winner as Sheffield Wednesday once again reduced the deficit, and started a run of momentum that saw the forward named as the Premier League’s finest footballer.

He formed a scintillating partnership with Sheringham – the mastermind behind his iconic celebration – and finished his maiden campaign in English football with 30 goals in all competitions to be named as the FWA Footballer of the Year.

Klinsmann was the first foreign import to win the award in the Premier League era and remains one of just three players to have done so in their debut season in England, his instant impact seeing him become a legendary figure in the capital.

Ambitious, always, Klinsmann’s time at the club proved a short but sweet affair, as he departed a Tottenham team some distance from winning silverware to return to Germany at Bayern Munich in 1995.

Spurs had finished the season in seventh under Ossie Ardiles despite the prolific exploits of Klinsmann and Sheringham, and the World Cup winner decided a move to Munich was best in his search for further honours.

His connection, however, remained and a second spell at Spurs – rejoining on loan to save the north London side from relegation concerns in 1997/98 – only enhanced his legacy on English shores.

His mix of humour, humility, and a willingness to engage in the rough and tumble of the Premier League resonated with the same supporters who had previously criticised his arrival, with Klinsmann going from loathed to loved within the space of one spectacular season at Spurs.

A road to redemption that began with his humorous heroics on debut at Hillsborough.