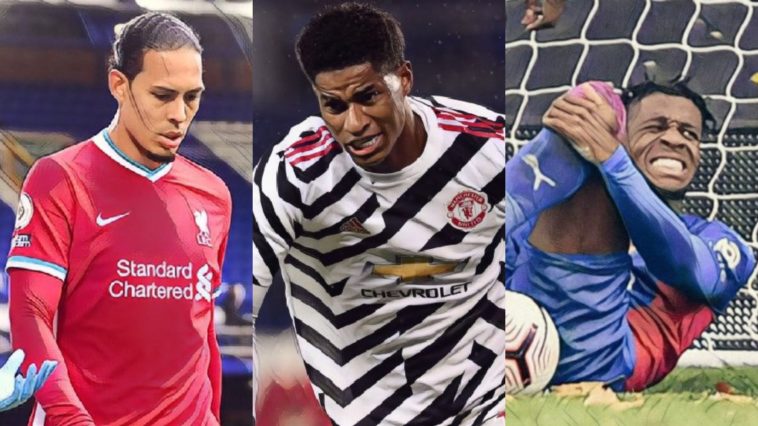 The funniest tweets from the world of football this past week, featuring the reaction to Liverpool centre-back Virgil van Dijk’s injury, Marcus Rashford’s bid to end child hunger, the link between Grand Theft Auto and Leeds United, and Wilfried Zaha channelling his inner Peter Griffin.

Feel for Liverpool, the first team ever to be on the end of a wrong decision ☹️😡something must be done

Klopp on Van Dijk: “We will wait for him like a good wife is waiting when the husband is in jail.”

Meanwhile, Marcus Rashford scored the winner against PSG in the Champions League, gained countrywide supports for his free meals campaign, and put MPs in their place. All in a week’s work.

Blown away by news of local businesses stepping up to fill the voucher scheme deficit during the October half term. Selflessness, kindness, togetherness, this is the England I know 🏴󠁧󠁢󠁥󠁮󠁧󠁿

Add #ENDCHILDFOODPOVERTY to your tweets so I can track them. I will share as many as I can ♥️

At least turn on your comments and let me respond Steve. I very much welcome conversation on this. https://t.co/ly329QWMOp

Rashford has just bodied PSG and is using his day off to tell MPs to switch on their location. What a man. And people worried he was too nice in front of goal…

There will be no school meals over half-term, but Marcus Rashford is winning hearts and minds

Leeds United’s win over Aston Villa provided us with the only stat that matters this week.

This is the first time Leeds have been in the PL top three since Grand Theft Auto: Vice City came out pic.twitter.com/56RwJmOUv4

The internet did its thing and quickly turned this Spurs lineup into a meme.

It led to a rare Four Non Blondes reference on the timeline.

And so I wake in the morning and I step outside, and I take a deep breath and I get real high and I scream from the top of my lungs “What's going on?", and I say pic.twitter.com/dvqEidhDde

Will Tottenham ever stop being so Spursy?

Man United were lucky not to concede a penalty against Chelsea.

We've got away with that. Maguire's headlocking Azpiliqueta as if he's a Greek police officer

Are we sure that proposed European Premier League is as elite as they think it is?

Reminder that Shakhtar travelled without 10 first team players due to COVID, their coach said it was a "nightmare situation" for them pre-game.

There’s a third generation of footballer produced by the Wright family tree? Must be something in the gene pool.

A work of art.

.@Aubameyang7 vs Chelsea in the @EmiratesFACup final animation!#afc | @Arsenal