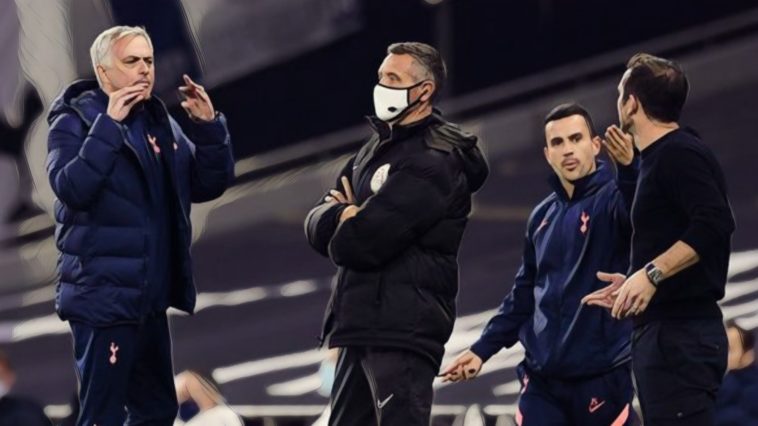 The best and funniest tweets of the week from the world of football, featuring one of the most slapstick goals ever, Eric Dier, Frank Lampard and Jose Mourinho having a go at each other, and Man United’s transfer business.

Contender for Goal of the Year, this.

This Rijeka goal away to Copenhagen might be the funniest goal in years https://t.co/pygJrytusR

Eric Dier ran all night against Chelsea on Tuesday, including to the toilet during the middle of the game.

Strange scenes as @ericdier runs off the pitch to the dressing room, followed hastily by Mourinho. Then Dier runs back out to resume playing. Presumably he needed the loo. Players just don’t shit on the pitch anymore. What’s wrong with them?

Eric Dier has left the pitch in an unusual fashion in his last two domestic cup appearances and you have to respect it pic.twitter.com/zDTk3qf7BW

Dier must have left the toilet in some state pic.twitter.com/NFQyuRQsMF

Meanwhile, his manager took Frank Lampard down a peg with his famously sharp tongue.

Lampard & Mourinho really sniping at one another across the tech areas. 'F—— hell Frank, when you're losing 3-0 you're not standing up here'

Old friends Lampard and Mourinho are exchanging a few words on the touchline here at the Tottenham Hotspur Stadium.

This is what football is all about.

Leeds away always reminds me of being called a 'c***' by a guy in his late eighties with no teeth when he saw my scarf outside Elland Road. I was 13.

You definitely hate yourself if you wear puke green football boots.

How do you guarantee getting a two footer in the first 5 mins ⬇️ pic.twitter.com/ExQB72vZ9M

The handball rule is terrible, but let’s put it in perspective.

“Handball is killing the game we love.” pic.twitter.com/Om1KaY8LXn

It's not been a good summer window for #MUFC so far, but could they be closing in on a new winger? 👀

You can’t do anything these days.

My sons are gutted. Let kids be kids! https://t.co/8myhY44ehd

Do Liverpool need to win domestic cups to show they care?

Fulham’s director of football got a lot of attention, and flak, for airing the club’s business on Twitter.

I apologize to @FulhamFC supporters for our performance tonight. We’ve looked to add centre-backs since Wembley, I’m sorry we haven’t yet as 2 got COVID + we lost a Free we thought was close + had another issue with a 4th CB. I promise players in + better efforts from this squad.

Back when real men played the game.

A medieval king deciding what to build next. pic.twitter.com/mOecqxwc7y

Arsenal fans looking at that League Cup draw when they were paired with Man City:

The rise of Dundalk FC, Arsenal’s irish opponents in the Premier League

Why does Philippe Coutinho look like a hologram here?

Read: By mocking the excitement of Evertonians the joke is on us