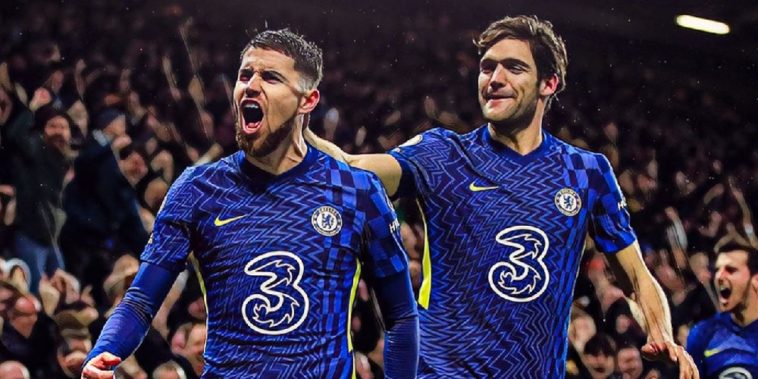 Chelsea snatched a winner in stoppage time in a thrilling, penalty-dominated 3-2 victory over Leeds United at Stamford Bridge on Saturday.

Despite having endured a slight wobble in recent weeks, the Blues initially started brightly against Marcelo Bielsa’s side with Mason Mount going close early on, as the visitors struggled to get a foothold in the game.

On a rare Leeds attack, Edouard Mendy was called into action to deny a super Raphinha attempt, with that effort appearing to spark Leeds into life as they then soon found themselves ahead from the penalty spot.

Having been denied by the Chelsea stopper just minutes earlier, up stepped the Brazilian playmaker to cooly convert from the spot, following a clumsy foul by Marcos Alonso on former Manchester United man, Daniel James.

To their credit, the title chasers responded well to falling behind and struck back just before the break, Mason Mount continuing his recent fine form with a first-time finish on his weaker foot, albeit with Illan Meslier not covering himself in glory after vacating the near post.

The comeback was complete just after the break as the hosts netted a penalty of their own, the often-reliable Jorginho sending the ‘keeper the wrong after a foul by Raphinha on Antonio Rudiger.

In a topsy-turvy encounter, the momentum then swung back in the way of the visitors with that man Raphinha looking intent on atoning for his penalty error, although it was his replacement Joe Gelhardt who eventually dragged Bielsa’s men level for his first goal for the club – just over a minute after entering the fray.

That wasn’t enough to snatch a point, however, as the hosts struck in stoppage time from yet another penalty, Jorginho again dispatching emphatically following a needless foul by Mateusz Flick on Rudiger.

While the result sees Chelsea keep pace with their title contenders at the top of the table, Tuchel admitted his side were ‘lucky’ to have come away with all three points.

88% – Of all players with at least eight Premier League goals (all time), Chelsea’s Jorginho has scored the highest proportion from the penalty spot (88% – 15/17). Ice. pic.twitter.com/QshZIxbJz1

“It was a nice game of football. Very intense and I’m very happy with how we played,” he told Sky Sports.

“I think we deserved to win but of course it’s lucky when you have a late goal in extra time. But coming back twice is very impressive and I’m very happy we turned things around. It was tough work but we didn’t expect anything else.

“We were lucky, we needed this. We were unlucky in last two games conceding very late goals so maybe this is exactly what we needed.”

The German was also full of praise for midfield star Jorginho for his penalty heroics, insisting it is ‘not easy’ to score twice from the spot in the same game.

“It’s not so easy two score two penalties. I wasn’t sure if he would take the second one. We believe in our players, it’s not easy so full credit to him.

The victory leaves Chelsea in third and just two points off leaders Manchester City, with the former Borussia Dortmund boss ‘very happy’ to have got the win.

“There’s no alternative to winning in this dressing room. We have two days off now as we play again on Thursday. I’m really happy for the team and the staff that we have these two days with a feeling that we have turned things around.

“There are things to improve as always but I’m very happy with the result.”

On the bust-up between the two sets of players at the final whistle: “Emotions were boiling. I think it’s normal. I didn’t hear it was anything serious so all good.”

Chelsea host Everton on Tuesday night, before travelling to Molineux to face Wolves on Sunday.