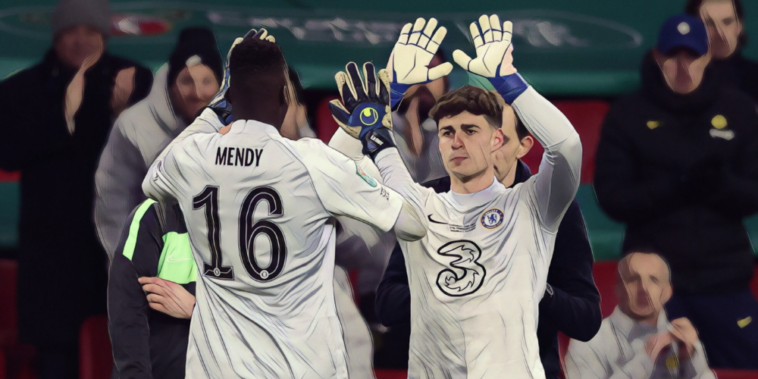 Thomas Tuchel has taken the ‘blame’ for his decision to bring on Kepa Arrizabalaga during Chelsea’s Carabao Cup final defeat to Liverpool.

Despite an excellent performance between the sticks from Edouard Mendy, Kepa was substituted on in the closing stages of extra time as the final headed into a shootout, but failed to save any of Liverpool’s 11 spot-kicks before missing his own penalty kick as Chelsea crashed to defeat at Wembley.

The goalkeeper had successfully been substituted on during the UEFA Super Cup win over Villarreal in August and has compiled an impressive record for saves in shootouts this season, but Tuchel’s gamble backfired after he introduced the Spaniard for Edouard Mendy.

Tuchel admits he is happy to take the blame for his decision to remove Mendy – who made a number of superb saves before his withdrawal – after reflecting on Chelsea’s final defeat.

“Do you think we do this and don’t talk to the players? The players know the plan and we have done it before,” said Tuchel at his post match press conference.

“If you want to blame somebody, blame me; this is not a problem.

“I take the decisions and I don’t take them to try to be the hero. Today it took 11 penalties to find the winner. And if you want to blame anyone blame me, there’s no problem.”

Tuchel refused to blame Kepa for the wayward penalty that confirmed Liverpool as cup winners, shouldering the responsibility for the unusual late substitution that contributed to Chelsea’s loss.

“It is so bad for him of course, but no blame of course.

“We took the decision like we did last time in a penalty shoot-out, because Kepa is training with the players on a daily basis.

“They know how good he is and he simply has more time to do this than Edou (Mendy) on the training ground.

“This plays a huge part in how good we shot today. Unfortunately he could not save any, the pens were brilliantly taken.

“It was a bit harsh on him today to be the guy to miss the one and only penalty today but there’s no blame.

“We cannot know what would have happened if we had left Edou on the pitch.

“So of course if there’s any blame, it’s blame on me. I’m the guy to take the decisions, sometimes it works out and sometimes it does not.