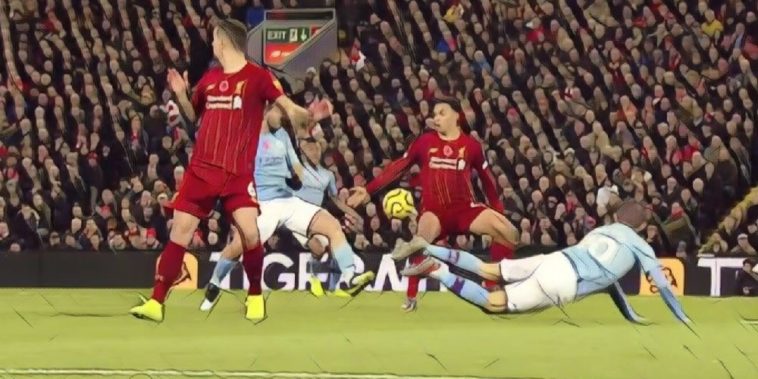 It was a game that was full of action from the off, Man City settling into the game with their usual slick passing style. However, they quickly found themselves chasing the game, Liverpool midfielder Fabinho firing home an absolute thunderbolt from 25 yards, in what was a frenetic start.

The opener wasn’t without its controversy though, replays showing Trent Alexander-Arnold clearly handling the ball in his own area in the build-up, though VAR decided against awarding the visitors a penalty, much to the anger of Pep Guardiola and his charges.

Another back-post header made it three in the second-half, notorious diver Sadio Mane diving in at the back post to finish off a splendid cross from Jordan Henderson.

City had plenty of chances throughout the evening, but their usual clinical nature in front of goal was desperately absent, Sergio Aguero missing a whole host of opportunities to net his first ever Anfield goal.

Bernardo Silva did squeeze one in for the reigning champions but it would serve as no more than a consolation, with Liverpool holding on for a famous win to move eight points clear at the top of the table.

Speaking afterwards, Trent Alexander Arnold admitted that Liverpool want to remain unbeaten throughout the campaign, but refused to get carried away with still 24 league games to play.

“We’re on a good run of form and we’re still unbeaten, which is what we want to do,” the England full-back told Sky Sports.

“We want to keep picking up the three points and we know at home, we have an advantage with the fans. We feel as though we should win every time we’re here so for us, it’s about keeping that momentum up.

“We’re just focused on ourselves and picking up points. We got a lot of points last season and it still wasn’t enough so we’re going to have to get in and around the same kind of numbers to hopefully come away with a bit of silverware. It’s still early doors and we know we’ve got a long way to go.”

Asked about the decision not to award a penalty against him, Trent Alexander-Arnold said that Liverpool ‘punished’ City during their complaints, as well as highlighting a handball by Bernardo Silva in the same incident.

“Obviously there’s VAR and I think it had hit my arm but I think it might have hit Bernardo Silva’s first,” he added.

“It’s one of them where you have to carry on playing and then we went down the other end and punished them. They were complaining about the handball but Fabinho’s hit a wonderful strike and we’ve gone 1-0 up.”

The result moves Liverpool eight points clear of Leicester and Chelsea in second and third, while Man City are a point further back in fourth.