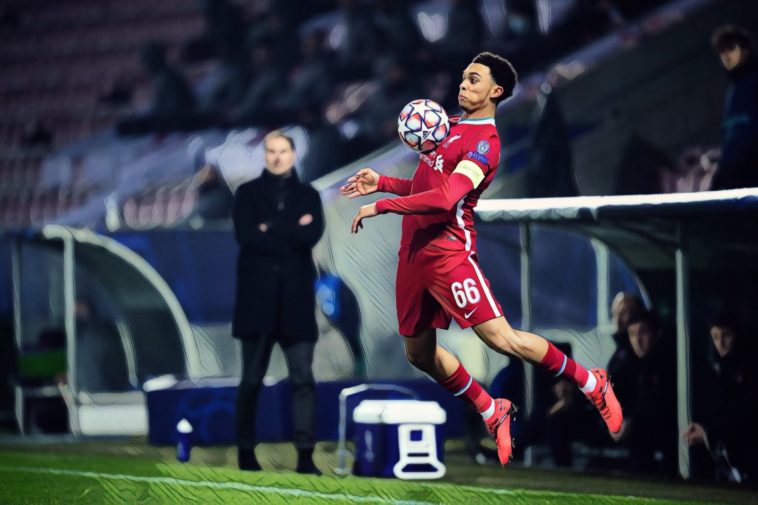 Trent Alexander-Arnold has reflected on a ‘special’ night after the full-back was handed the Liverpool captaincy for the first time against FC Midtjylland on Wednesday night.

Alexander-Arnold was named as skipper of the side as Liverpool completed their Champions League group stage campaign with a 1-1 draw against the Danish side, wearing the armband for the opening hour before the introduction of club captain Jordan Henderson as a substitute.

It marked a special occasion for the boyhood Red who has starred since coming through the academy ranks at Anfield, with Alexander-Arnold revealing his pride at being handed the opportunity to skipper a rotated side.

The right-back led what was Liverpool’s youngest ever starting XI for a Champions League clash, with teenage academy prospects Rhys Williams and Leighton Clarkson handed opportunities and 18-year-old Billy Koumetio becoming the club’s youngest ever player in the competition as a second half substitute.

“An extremely proud moment for me and the people who have helped me do that,” he told Liverpoolfc.com.

“You’ve obviously got to give thanks to the manager and the staff who chose me to captain the team tonight. It was a really proud night for me on a personal note. I think I’ll look back on tonight with fond memories as being captain for the first time.”

The 22-year-old was asked if there was any particular moment when it really hit home he was fulfilling a boyhood ambition, with the England international admitting it felt ‘special’ to lead the side out on a Champions League night.

“Obviously it’s always been a dream, it’s always special to play on Champions League nights. To lead the team out was incredibly proud, it was something that was different, new to me. It was special, it felt special out there.”

Read – MVPs: The player each ‘top six’ side just can’t do without