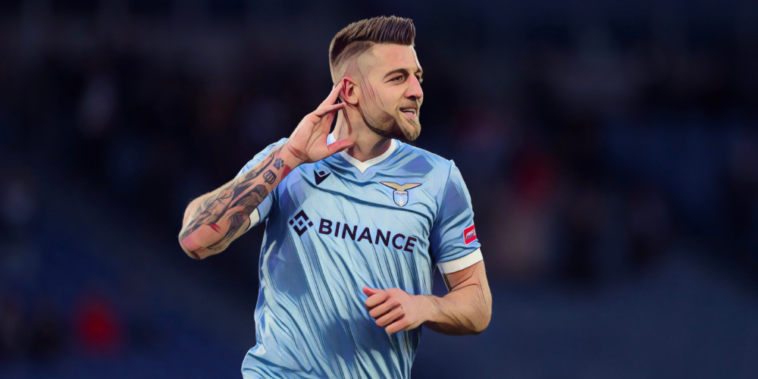 Tottenham want to rival Manchester United to sign Sergej Milinkovic-Savic this summer, with Antonio Conte and Fabio Paratici ‘crazy’ over the Lazio midfielder.

Milinkovic-Savic has been regularly linked with a move to one of Europe’s leading clubs in recent seasons and the 27-year-old could depart Lazio this summer with the Serie A side set to miss out on Champions League qualification.

Manchester United are understood to have made the Serbia international a leading transfer target with midfield additions the focus this summer, though the Express are reporting that Spurs will rival the Red Devils for Milinkovic-Savic’s signature.

Antonio Conte is believed to be a huge admirer of the midfielder as he once again looks to Italy for reinforcements, having strengthened his squad with the arrivals of Dejan Kulusevski and Rodrigo Bentancur in January.

The Premier League rivals will not be alone in their pursuit, however, with Real Madrid, Bayern Munich, Paris Saint-Germain and Juventus all interested.

Lazio are said to value Milinkovic-Savic in the region of €60m-€70m with the star having established himself as one of Serie A’s best midfielders across seven seasons with the capital club.

He has made 41 appearances in all competitions for Lazio this season, scoring nine goals and providing 10 assists.