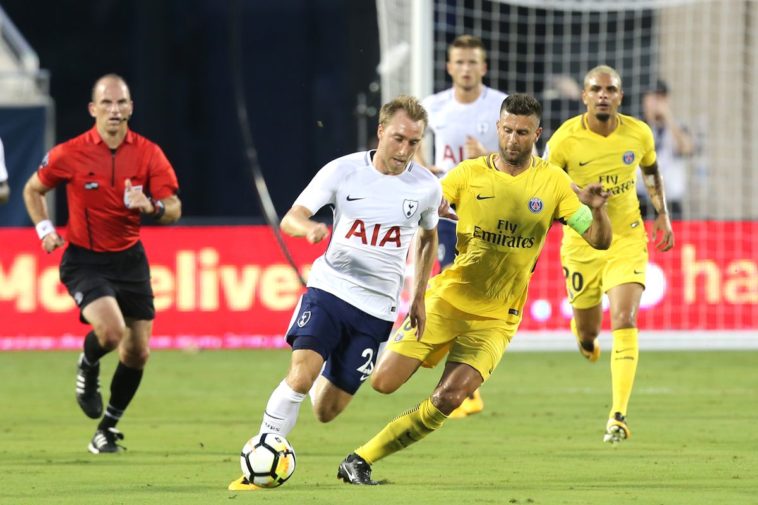 It was an eventful game, with two screamers, a red card, and a penalty adding to the drama of the International Champions Cup game.

It took just five minutes for them to equalise however, through a sensational 30-yard strike from Eriksen. The Dane picked up the ball mid-way into the PSG half, took a couple of touches then hammered a powerful shot into the top-right of Kevin Trapp’s goal.

From a brilliant goal to a calamitous one – in the 18th minute, Eric Dier closed down Trapp as he went to clear the ball, only for the German goalkeeper to kick the ball against Dier, and watch hopelessly as it flew back past him into the net.

PSG’s second came in the 36th minute. Some poor defending from Tottenham allowed Pastore space in the box. He danced past Carter-Vickers and unleashed an emphatic finish into the top right corner past Hugo Lloris.

After a flurry of substitutions at half-time which saw the introductions of Harry Kane and Dele Alli, it took just 20 seconds for the former to make his mark on the game. Trapp came charging out of the box to stop Kane in his tracks, and handled the ball outside his area. A swift red card was brandished from the referee, and PSG were down to 10 men for the remainder of the second half.

Despite this, it took until the 80th minute for Tottenham to take the lead, and did so in great style. Toby Alderweireld, out form defence, received the ball to the right of the box and drilled a low shot into the bottom left corner despite Alphonse Areola’s best efforts to keep it out.

The nail was hammered into the coffin in the 86th minute when a Spurs cross hit the hand of a PSG defender and they were awarded a penalty for handball. Star striker Kane stepped up to the spot, and smashed the spot-kick down the middle of the goal, doubling Tottenham’s lead.

Tottenham in the end with an unconventional but comfortable 4-2 victory over tough opposition. Pochettino’s men now look forward to a match against Roma on Wednesday as they continue their pre-season in the USA, whilst PSG, currently linked with Neymar, play Juventus a day later. Both teams will be hoping to build on Saturday night’s result and put in a good performance in their next game.