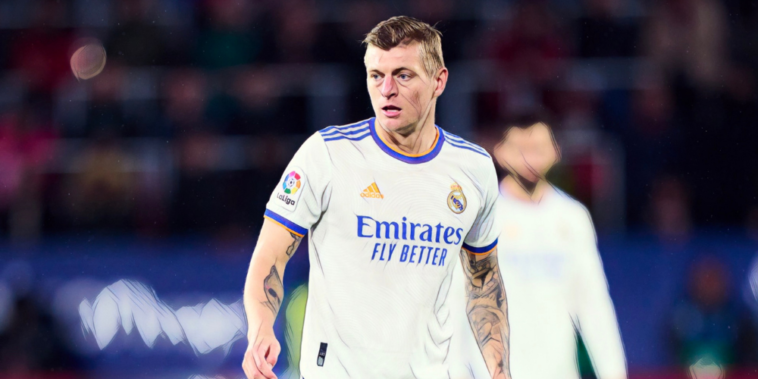 Toni Kroos has revealed how ‘close’ he came to joining Manchester United and admits talks with David Moyes had ‘convinced’ him to move to the Premier League.

United were interested in a deal to sign Kroos from Bayern Munich during the 2013/14 season, as the Red Devils embarked on a new era under the management of Moyes.

The Germany international had won the treble with Bundesliga side the previous season but felt undervalued in Munich, though a potential transfer collapsed following Moyes’ sacking at Old Trafford and Kroos instead joined Real Madrid in 2014.

The 32-year-old will face Manchester City in the Champions League semi-finals this evening and ahead of the clash has discussed how close he came to moving to their cross-town rivals.

“I knew beforehand that United wanted me,” Kroos said, as per the Mail. “And Moyes absolutely underlined that. It was a really nice afternoon with very pleasant people. We talked a lot about United’s football plan, which convinced me.

“But we also got to know each other as people. We knew quite a bit about the Moyes family afterwards. We talked about how we lived and how we all imagined life as a family.

“In the end we broke up to do it. So we agreed verbally. The next step should be to look at everything on the spot in Manchester. The move would not have been that complicated – after all, we only had one child at the time, seven months old. It would all have worked.”

Kroos arrived in Madrid after winning the World Cup with Germany and has since established himself as one of the best midfielders of his generation in the Spanish capital.

The German has won three La Liga titles and three Champions League trophies, a haul of silverware the midfielder admits would ‘probably’ have not arrived with a move to Manchester.

“I’m not someone who thinks about hypotheticals,” Kroos added. “Yes, it was close. I almost went to Manchester United. But that’s not how things turned out.

“I don’t have these what-if-thoughts. Because there are no real answers to them. The only thing I can say with certainty is that I probably wouldn’t have won the Champions League three times with Manchester United.”