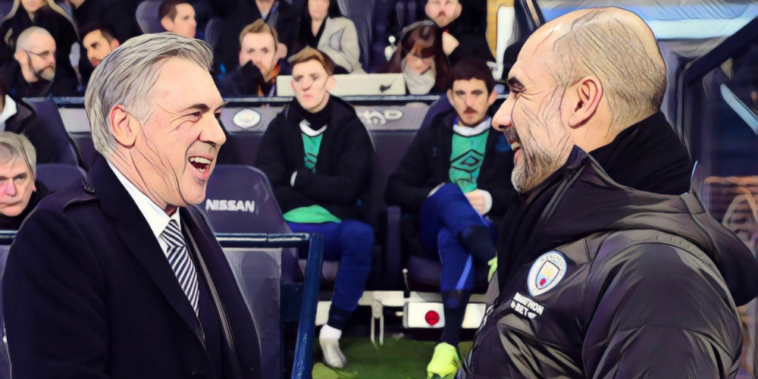 Pep Guardiola and Carlo Ancelotti go head-to-head in the Champions League on Wednesday evening, as two of the competitions most successful coaches meet in the semi-finals.

Both have had huge experience in the latter stages of Europe’s elite competition and will be hoping their team can reach the final as Real Madrid host Manchester City at the Bernabeu.

Ahead of the meeting between two iconic coaches, we’ve decided to look at the managers to have reached the most Champions League semi-finals.

Miguel Muñoz became the head coach of Real Madrid’s iconic side of the 1950s, one which dominated the early editions of the European Cup.

Muñoz won the first three European Cups as a player at the Bernabeu, before taking over as manager as Real became instant European royalty.

He became the first person to win the competition both as a player and a coach after the club’s infamous 7-3 thrashing of Eintracht Frankfurt in the 1960 final at Glasgow’s Hampden Park.

Muñoz added a second European Cup as manager in 1966 and reached the last four on six occasions during a managerial career that also included winning nine La Liga titles in Madrid.

The German guided Real Madrid to a drought-breaking Champions League title in 1997/98, overcoming disappointing domestic form to end the club’s 32-year wait for a European crown.

Heynckes also had three spells as Bayern Munich manager and twice reached the final as head coach of the Bundesliga giants, losing the 2012 showpiece to Chelsea on home soil before earning redemption the following season.

Bayern beat Borussia Dortmund in the first ever all-German final in 2013, as Arjen Robben’s late goal earned a 2-1 win at Wembley and completed a historic treble for the Bavarians.

Of those semi-finals the Red Devils progressed in four, including reaching three finals in just four seasons between 2008 and 2011.

He added a second European crown after beating Chelsea in the first all-Premier League final in 2008, but missed out on further success after final defeats to Barcelona in 2009 and 2011.

Jose Mourinho built his reputation in the Champions League, rising to prominence after guiding an unfancied Porto to the ultimate success in 2003/04.

It remains the only time a team from outside Spain, England, Germany or Italy has been crowned European champions this century, with Mourinho having since reached a further seven semi-finals during spells at Chelsea, Inter Milan and Real Madrid.

He led Inter Milan to the Champions League in 2009/10, ending a 45-year wait for the Nerazzurri and completing the first continental treble in Italian football history.

Mourinho is currently back in Italy in charge of Roma, where he is looking to guide the club to the inaugural Europa Conference League title this season.

Ancelotti’s appearance in this season’s semi-finals is the eighth of his career, with the Italian’s résumé reading as a roll-call of European football’s biggest clubs.

His eight semi-finals have come with Juventus, AC Milan, Real Madrid and Bayern Munich, progressing to the final on four occasions.

Carlo Ancelotti is the first coach ever to reach the Champions League semi-finals in FOUR different decades 🤯#UCL pic.twitter.com/ez2QA5h7hl

Ancelotti twice won the Champions League during his time with AC Milan, becoming one of seven men to have won the competition as both player and manager, having twice been crowned a European champion during his playing career with the Rossoneri.

Ancelotti also led Real Madrid to the club’s fabled ‘La Decima’ triumph in 2013/14 and will have his eyes set on becoming the first manager in history to lift the trophy on four occasions this season.

Pep Guardiola holds the record for Champions League semi-final appearances as a manager, with the 2021/22 season his ninth time in the last four.

Guardiola reached the Champions League’s last four in each of his seven seasons during spells in charge of Barcelona and Bayern Munich, winning the trophy on two occasions with the former.

Barcelona’s iconic side beat Manchester United in both the 2009 and 2011 finals, the latter a magnificent performance to win 3-1 at Wembley.

Since being appointed as Manchester City manager in 2016 he has reached two further semi-finals, including progression last season before losing the showpiece to Chelsea in Porto.