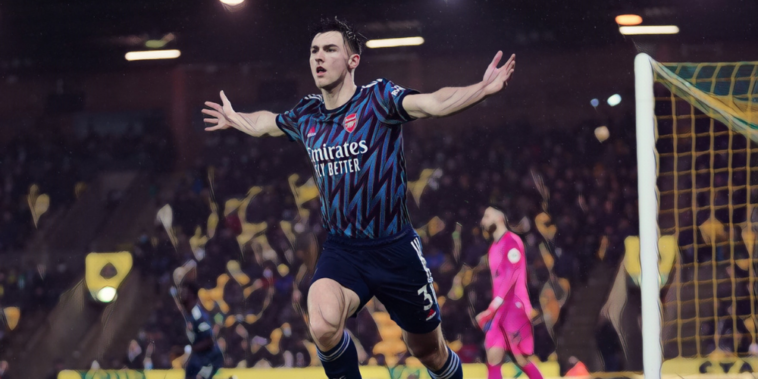 Kieran Tierney insists there is a ‘long way to go’ in Arsenal’s pursuit of Champions League football, despite the north London side’s impressive run of form.

Tierney scored as Arsenal secured a fourth consecutive league win with an impressive 5-0 thrashing of Norwich at Carrow Road, a resounding result that equalled the Gunners’ biggest ever winning margin in an away Premier League fixture.

The win maintained Arsenal’s position inside the Premier League’s top four and six points clear of fifth-place Tottenham, though Antonio Conte’s side have three games in hand on their North London rivals.

Tierney insists Arsenal are not getting carried away despite a fine period of performances, insisting there is a long way to go for the Gunners ahead of a challenging run of games.

“It’s obviously what every Arsenal fan, player and staff wants, but there is a long way to go,” the 24-year-old said after the win at Norwich.

“We can’t get too ahead of ourselves yet. There are big games coming up and there are a lot of games coming, so there’s still a long way [to go].”

“We have got a very young team and it’s brilliant to see. Hopefully, for years to come, we are all playing together and growing together. I think you can see that over the last year or so.”

Arsenal’s fixture with Wolves tomorrow has been postponed, with the club next in action in a home clash against league leaders Manchester City on New Year’s Day.

Mikel Arteta’s side also face a North London Derby with Tottenham in mid-January and Tierney has spoken on the Gunners’ ambitions to compete with the division’s best sides.

“That’s the aim,” he added. “We want to be the best we can every day and we are building to there.

“We are getting more consistent. We are scoring more goals as well, so we just need to keep going in that direction.”