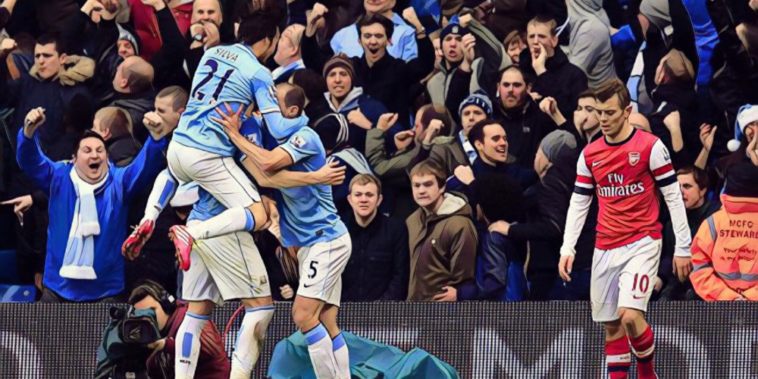 Manchester City meet Arsenal in the Premier League this weekend, with the two teams having endured rather contrasting fortunes in recent campaigns.

Pep Guardiola’s side are the reigning champions and will be looking to defend their title this term, whilst Arsenal remain in transition following a downturn in fortunes.

Ahead of this weekend’s clash at the Etihad, we’ve decided to look back at the City XI from one of the most memorable meetings between the teams in recent seasons, a nine-goal thriller that saw Manuel Pellegrini’s side thrash the north Londoners in 2013.

Arsenal travelled north as the league leaders, but were overwhelmed as a devastating display from the hosts saw City win an entertaining encounter 6-3.

Here is the Manchester City XI from their 6-3 win over Arsenal in December 2013.

The towering Romanian was preferred to Joe Hart in goal with the England number one demoted to the bench, though failed to do his hopes of a regular role much good after conceding three goals at the Etihad.

Pantilimon was strangely static as Theo Walcott’s deflected strike rolled in for the Gunners’ first goal, in what was one of just seven league appearances the shot-stopper made across three seasons at the Etihad – all of which came during the 2013/14 campaign.

Pablo Zabaleta ranks amongst Manchester City’s finest servants, having been an integral figure in the club’s rise to the upper echelons of English football during a nine-year spell at the Etihad.

The Argentine right-back won three league titles and made 333 appearances in all competitions, establishing himself as one of the best right-backs of the Premier League era.

He played an influential role in this win over Arsenal, providing the assist for City’s second goal of the afternoon after bursting forward down the right flank.

Demichelis arrived at City in the summer of 2013, reuniting with former manager Manuel Pellegrini after forming part of the Chilean’s impressive Malaga side the previous season.

Despite boasting a pedigree that included 259 appearances at Bayern Munich, the experienced Argentine often failed to provide an assured presence at centre-back during three seasons in England.

He won a Premier League and League Cup double during his first season at the Etihad and made over a century of appearances for the club, but often found himself a target for criticism during the latter stages of his career.

Vincent Kompany’s legacy at Manchester City is assured following a decade of success, the centre-back captaining the side to four league titles including the club’s triumphant 2013/14 campaign.

Kompany was the undisputed leader of the City side as they emerged from the shadows to become England’s dominant force, with the Belgium international one of the best defenders in the division.

The club are currently in the midst of creating a statue to commemorate Kompany’s achievements at the Etihad, which include unforgettable defining goals during title run-ins in 2012 and 2019.

One of two former Arsenal players who lined up against their former side at the Etihad, Clichy followed a well-trodden path by leaving the Gunners to sign for City in 2011.

The left-back spent six seasons with City and won two league titles, though endured a disappointing performance during the 6-3 win against his former side, squandering possession more than any other teammate.

The sole player in this XI who remains a part of the current City set-up, Fernandinho was in the early months of his Premier League career following a big-money move from Shakhtar Donetsk in 2013.

Fernandinho opened his goalscoring account in the division with a brace against Arsenal and was named as man of the match following an excellent midfield display.

The Brazilian’s first came with a bending finish beyond Wojciech Szczęsny from just outside the area, before dinking a second over the Polish goalkeeper after neat footwork inside the box.

Fernandinho’s five league goals in 2013/14 are the joint-most he has managed in a Premier League season, with the club captain now into his ninth season in English football – a period that has delivered 11 major trophies.

Yaya Toure formed a formidable midfield partnership with Fernandinho during the 2013/14 season, the security provided by the summer signing unleashing the former from his shackles.

But for the excellence of Luis Suarez, the midfielder would surely have been named as the PFA Player of the Year after producing a series of unstoppable performances.

His haul included a 96th-minute penalty in the win over Arsenal at the Etihad, the Ivorian capping another explosive attacking performance from the hosts with their sixth goal of the afternoon.

Samir Nasri burned bridges with Arsenal after leaving the club for Manchester City in 2011, moving to the Etihad in a £24m deal.

Nasri had been a popular figure in north London but was labelled a mercenary following his departure, though it was a transfer that proved vindicated as he won two league titles at the Etihad.

The Frenchman enjoyed his most productive campaign during the 2013/14 season as he scored 11 goals in all competitions, including a fine strike as Sunderland were beaten in the League Cup final.

David Silva, for many, is the best player to have adorned Manchester City’s colours following a phenomenal Premier League career.

The Spanish playmaker was one of the first exciting arrivals following the club’s takeover and spent a decade at the Etihad, making 436 appearances and winning four league titles amongst his honours.

Silva was influential on his return from injury during the six-goal thrashing of Arsenal in 2013, scoring his side’s fourth after emphatically turning home Jesus Navas’ cross in the 66th minute.

Signed from Sevilla during the summer following a prolific campaign in La Liga, Negredo enjoyed a fine first season in the Premier League as City were crowned champions.

The powerful Spaniard provided the perfect foil for Sergio Aguero and scored 23 goals in all competitions, including the second goal in the win over Arsenal as he turned home Pablo Zabaleta’s cross from close range.

Negredo was particularly productive in cup competition with just nine of his goals coming in the Premier League, the forward one of four City players – alongside Aguero, Toure and Edin Dzeko – to reach 20 goals in all competitions during the 2013/14 season

Somewhat surprisingly he was allowed to leave after just one season, returning to Spain to sign for Valencia on a season-long loan deal.

Manchester City’s chief goalscorer got their 6-3 win up and running with a trademark clinical finish, turning home Martin Demichelis’ flicked header with an acrobatic volley to open the scoring.

Aguero scored 28 goals in all competitions for City during the 2013/14 season, part of a record-breaking 260 goals the Argentine scored during an incredible career at the Etihad.

Aguero’s list of achievements includes being the highest-scoring overseas player in Premier League history, whilst he also holds the divisional record for number of hat-tricks.

The last stalwart of City’s first title-winning side to depart after leaving for Barcelona during the summer, Aguero’s impact ensures he is one of the very best imports English football has seen.

Introduced for Aguero just five minutes after the interval, the winger made an almost instant impact after teeing up City’s fourth of the afternoon for David Silva.

Navas spent four seasons with the club after signing from Sevilla ahead of the 2013/14, but often struggled to produce consistent performances and managed just four league goals.

Milner signed for City from Aston Villa in 2010 after being named as the PFA Young Player of the Year the previous season, but despite enjoying success at the Etihad he struggled to cement himself as an automatic starter.

He made 58 of his 147 league appearances for the club as a substitute, including 19 during the 2013/14 title-winning campaign.

One of those came in the thrashing of Arsenal at the Etihad, with Milner winning the late penalty that was converted by Yaya Toure.

A fairly forgettable signing amongst the abundance of imports at Manchester City across the past decade, Garcia spent two seasons with the club in a largely bit-part role.

The defensive midfielder came on as a late substitute in the win over Arsenal in a bid to run down the clock and shore up a chaotic game.