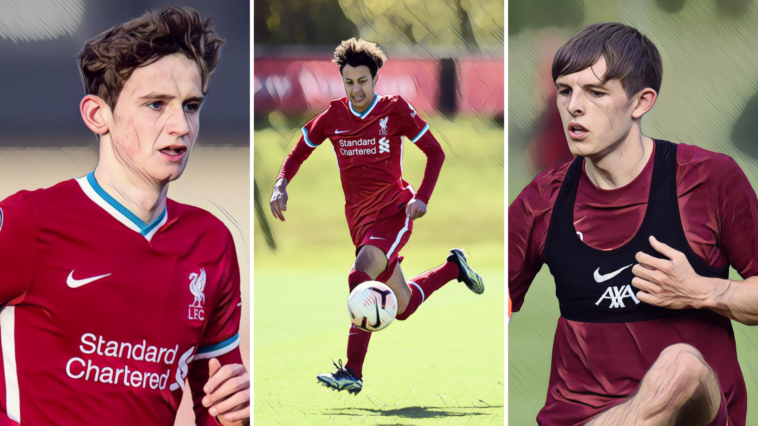 Jurgen Klopp has been discussing his excitement at Liverpool’s next emerging generation, with the German having been impressed by several academy graduates during the club’s pre-season preparations.

Klopp has taken 36 players away on the Reds’ month-long camp in Austria with a number of prospects joining the club’s first-team options and handed an opportunity to impress.

With finances restricted given the financial impact of the ongoing pandemic, Liverpool have made just one signing so far this summer following Ibrahima Konate’s arrival from RB Leipzig.

The Wirral-born midfielder made significant progress last season and has been praised for leaving his ‘heart on the pitch’ by Klopp this week, with Morton having been included on the trip to Austria after stepping up to the u23 side in 2020/21.

The 18-year-old has been with the Reds’ academy system since the age of seven and scored 10 goals last season for the u18 and u23 sides, before featuring as Liverpool’s u18s reached the FA Youth Cup final before losing to Aston Villa.

Morton signed a new long-term contract in January and spoke of his dream to train alongside first-team star Thiago Alcantara, an opportunity he will hope for once the star returns from a post-Euro 2020 holiday.

The boyhood Red has shared set-piece responsibilities for the club’s youth sides and will be hoping to follow in the footsteps of Trent Alexander-Arnold and Curtis Jones in being the latest local lad to impress Klopp and his coaching staff.

Another member of the FA Youth Cup runners-up, Bradley featured more prominently for the u23 side last season despite only turning 18 earlier this month.

The versatile youngster arrived as a winger but has played predominantly at right-back and his reputation has flourished since arriving on Merseyside from Northern Irish outfit Dungannon United in September 2019.

Bradley’s performances at youth level have already attracted attention at international level, with the Liverpool youngster making his senior debut for Northern Ireland in May, coming on as a late substitute for Stuart Dallas in a 3-0 win over Malta.

Given Liverpool’s lack of depth at right-back the teenager will hope to make an impression this summer, with reports having linked Neco Williams with a summer exit in search of regular first-team football.

Williams’ potential departure would leave the Reds without specialist cover behind Trent Alexander-Arnold and could provide Bradley with a first-team opportunity sooner than expected.

The youngest amongst the starlets currently training with the Liverpool first-team in Austria at just 16, Kaide Gordon signed for the Reds from Derby for a fee which could rise to £3m in February 2021.

Gordon was handed his senior league debut for the Rams as a substitute in a 4-0 win over Birmingham last December, before leaving the Championship side amid their financial turmoil to move to Merseyside.

The exciting winger made an instant impact and scored nine goals in addition to providing four assists in the u18 Premier League last season, whilst he also netted on his debut in the Premier League 2 for the Reds’ u23 side.

Gordon’s inclusion is a huge show of faith from Klopp who has an exciting collection of young wingers emerging from the ranks, with 17-year-old Mateusz Musialowski also in Austria after providing 12 goal involvements in 19 games for the u18 side in 2020/21.

Harvey Elliott will also be hoping to impress after returning from a productive loan spell at Blackburn, scoring seven goals and providing 11 assists in the Championship last term.

Leighton Clarkson is amongst the more senior options looking to impress Klopp in pre-season, either to force his way into the first-team picture or secure a loan move elsewhere to continue his development.

The midfielder was handed his senior debut during a 5-0 defeat League Cup defeat to Aston Villa in 2019, with the Reds fielding a youth side for the quarter-final clash given their commitments to the FIFA Club World Cup.

The 19-year-old has been handed two further opportunities at first-team level, whilst featuring regularly for the u23 side in the Premier League 2 last term, after forming part of the club’s FA Youth Cup-winning team two years earlier.

Comfortable in a variety of midfield roles, a temporary move away from Anfield this summer could be the right decision for his development having seen the progress made by the aforementioned Elliott at Blackburn – who have been linked as potential suitors for Clarkson – in 2020/21.

Cain featured alongside Clarkson for the u23 side last season and has impressed with his performances, the creative midfielder scoring six goals and providing five assists in the Premier League 2.

Part of the FA Youth Cup-winning side in 2019/20, he is now established in the older age group and was handed his senior debut for Liverpool during an FA Cup win over Shrewsbury in February 2020.

Yet to make another appearance for the first-team, the 19-year-old will be hoping to impress Klopp in Austria with the Reds facing friendly fixtures with Mainz and Hertha Berlin before the end of the month.

The most established amongst the collection of academy graduates in Austria, Williams was thrust into the first-team picture last season following a defensive injury crisis at Anfield.

The teenager had spent the 2019/20 campaign on loan at Kidderminster Harriers in the lower reaches of the National League North, before finding himself on the Champions League stage after featuring in each of Liverpool’s group stage fixtures last season.

Williams finished the campaign with 19 appearances in all competitions and featured prominently during the Premier League run-in as Liverpool secured Champions League qualification, partnering Nat Phillips as the Reds won each of their final five fixtures to finish third.

There were testing moments for the 20-year-old, including a difficult performance in an FA Cup defeat at Manchester United, but he impressed aerially and could be another loaned out to continue his development.

The returns from injury of Virgil van Dijk, Joe Gomez and Joel Matip – alongside the summer signing of Ibrahima Konate – leave Williams facing a tough task to secure first-team football this term, though there is understood to be interest from the Championship for a raw defender who needs further time to develop.