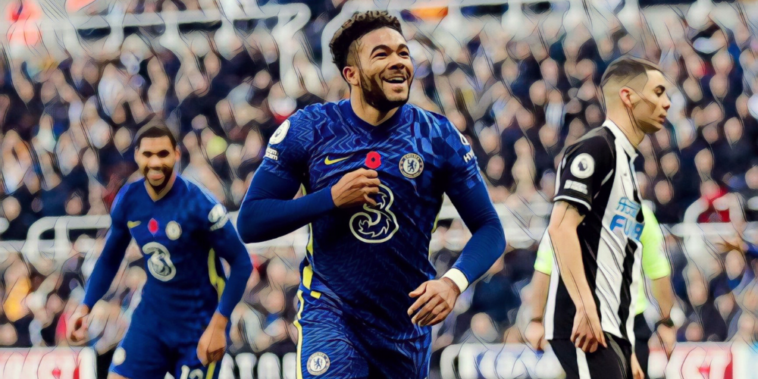 Chelsea’s academy system is amongst the most successful in world football right now, the west Londoners having produced a number of talented prospects in recent seasons.

Thomas Tuchel’s side were crowned champions of Europe last season after winning the Champions League, with the Blues containing five players within their matchday squad who spent their formative years in the club’s youth system.

It’s not just Chelsea who are benefitting from what has proven a conveyor belt of young talent, however, a number of the Blues’ graduates currently flourishing in other colours across the Premier League.

We’ve decided to look at some of the most prominent, here are five Chelsea academy graduates starring in the Premier League this season.

Reece James is amongst a strong contingent of self-produced players currently within the Chelsea first-team set-up, with Frank Lampard’s integration of several prospects having provided successor Thomas Tuchel with a strong home-grown core.

James took some time to convince Tuchel following the German’s arrival as head coach, but has since cemented himself as an influential member of the manager’s preferred wing-back system.

The 21-year-old has elevated his game to new levels across the start of the 2021/22 campaign, providing six goal involvements in just five Premier League starts.

Reece James is now Chelsea's top scorer in the Premier League this season!

Not bad for a full-back 👏 pic.twitter.com/GdDFTonf1l

James’ four league goals are already as many as the full-back managed across the past three league seasons for Chelsea and Wigan, having spent a season of development with the latter before returning to Stamford Bridge.

James has also won eight caps for England since his senior debut in 2020 and has all the attributes to cement himself as an irreplaceable figure for both club and country in the coming seasons.

Whilst the aforementioned James, Mason Mount and Callum Hudson-Odoi have established themselves in the Chelsea side in recent campaigns, few envisaged Trevoh Chalobah joining that trio at the forefront of Thomas Tuchel’s plans this term.

The defender returned from a loan spell at Lorient last season and was expected to exit on another temporary basis, only to impress the head coach in pre-season before a starring performance in the UEFA Super Cup win over Villarreal.

The 22-year-old has since made five Premier League starts this season – scoring twice – and has impressed with his versatility and temperament in high-profile fixtures, with Chalobah having stepped seamlessly into the role vacated by Kurt Zouma’s summer departure for West Ham.

Chalobah’s emergence has been a welcome boost after Chelsea missed out on the signing of Jules Kounde during the summer window, the centre-back providing a valuable option in a squad stacked with strength in depth.

Conor Gallagher has been one of the signings of the season so far since arriving at Crystal Palace on a season-long loan deal during the summer, the midfielder having proven a breath of fresh air in Patrick Vieira’s revolution at Selhurst Park.

Vieira arrived at Palace during the summer with the club having overseen a mass exodus of senior players, the new manager tasked with bringing down the squad’s average age whilst remaining competitive.

Arguably no arrival has been more pivotal to a new-look Eagles side than Gallagher, whose infectious energy has been a major factor behind some encouraging performances.

The 21-year-old has scored three goals and provided a further two assists, including netting the crucial second in Palace’s 2-0 win at Manchester City last weekend – a result his parent club will no doubt have been delighted with.

Gallagher ranks sixth in the Premier League for goal-creating actions and shot-creating actions so far this season, whilst his tireless pressing and off-the-ball work means he ranks joint-third for pressures.

Gallagher’s box-to-box showings have led to calls for the midfielder to earn an England call-up ahead of November’s international break, whilst his performances will not have gone unnoticed by those in power at Stamford Bridge.

Gallagher was joined at Crystal Palace this summer by another product of the Chelsea academy, with Marc Guehi completing an £18m permanent move across the capital.

Eyebrows were raised at the sizeable fee commanded by a centre-back without Premier League experience, but the England youth international had impressed across 18 months on loan at Championship side Swansea.

Guehi formed part of the England u17 side – alongside the likes of Phil Foden and Callum Hudson-Odoi – crowned World Cup winners four years ago and has handled the step-up to Premier League level in fine fashion.

Played his part in an unlikely clean sheet. 🔒 pic.twitter.com/ig84TMR7k9

The 21-year-old is the youngest centre-back in the division with 5+ league starts this season and shone during Palace’s win at Manchester City last weekend, winning each of his five duels to help the Eagles to a clean sheet at the Etihad.

Guehi’s athleticism and pace has proven a fine compliment to the more experienced Joachim Andersen, the summer signings forming the backbone of a Palace side showing signs of improvement under Vieira.

The defender – alongside fellow arrivals in Odsonne Edouard and Michael Olise – has provided Palace with a strong foundation of youth on which to build in coming campaigns.

The only defender younger than Guehi to have played more than 500 minutes this season is Valentino Livramento, the teenager having made an instant impact since swapping Chelsea for Southampton.

Named as Chelsea’s Academy Player of the Year last season, the right-back decided to leave Stamford Bridge in search of first-team opportunities and signed for Southampton in a £5m deal.

The decision has proven vindicated for Livramento who has started each of the Saints’ 10 league games so far this season, scoring one and providing another to earn recognition with England at u21 level.

✨ Tino Livramento has become only the third 18-year-old this millennium to start the first ten game of a Premier League season.

He is going right to the 🔝. pic.twitter.com/4eWjnNIZgt

The 18-year-old has become an instant fixture in Ralph Hasenhuttl’s side and joins a collection of exiting full-backs to have emerged from Chelsea’s ranks in recent seasons, with the aforementioned James and Brighton’s Tariq Lamptey amongst those to have shone at Cobham.

Chelsea inserted a £25m buy-back clause into the deal that took Livramento – who is also eligible to represent Portugal and Scotland at international level – to Southampton and it would surprise few to see that activated should he continue his upward trajectory.

Livramento has also been joined at St Mary’s this season by fellow Chelsea academy graduate Armando Broja, with the 20-year-old Albania international having scored twice in six Premier League appearances.

Broja enjoyed a productive season at Vitesse Arnhem last term and signed a season-long loan deal with the Saints following the departure of Danny Ings.