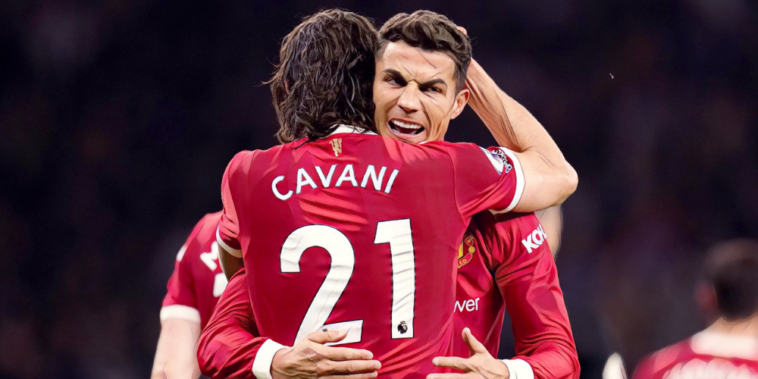 The veteran duo started together for the first time as teammates in the Red Devils’ win at Spurs, each finding themselves on the scoresheet in an impressive performance from Solskjaer’s side.

Ronaldo and Cavani – possessing a combined age of 70 – showed the value in goalscoring nous, two of the finest goalscorers European football has seen across the past decade rolling back the years in the capital.

The duo are not the only evergreen forwards still shining at the highest level this season and we’ve decided to look at five veteran strikers still ripping it up across Europe’s top five leagues.

Robert Lewandowski remains the gold-standard for centre-forwards in world football right now, the brilliant Bayern Munich forward enjoying the best football of his career during his thirties.

Lewandowski has scored an astonishing 122 goals in just 102 appearances for Bayern Munich since the start of the 2019/20 campaign, leading the Bavarians to a historic treble during the first of those seasons before enjoying a record-breaking Bundesliga campaign last term.

Lewandowski has started the current season in similar fashion with 12 goals in 10 games, as he looks to finish as the Bundesliga’s leading scorer for a fifth successive season and seventh time overall – a figure that will level the aforementioned Muller’s record.

The 33-year-old has shown no signs of slowing down and remains the best out-and-out number nine in the game at present, with no player having ever scored more goals across their first 100 Champions League appearances as Lewandowski prepares to celebrate a century of games in the competition.

Karim Benzema is now arguably La Liga’s star attraction in the post-Messi/Ronaldo era in Spain, with the forward having become the leading light of the Real Madrid side.

Benzema has been a key performer in a glittering era of success for Los Blancos, but his individual performances have elevated to new levels since stepping out of Ronaldo’s shadow at the Bernabeu.

The 33-year-old has scored 87 goals across the past three full campaigns for the Spanish giants, with his performances across the opening months of the 2021/22 campaign having seen the forward emerge as an outside contender for the Ballon d’Or.

Benzema combines work-rate with a clinical touch and clever link-play as the spearhead of the side, and whilst silverware success proved elusive with Real last season, his return to the international fold helped France to Nations League success  – scoring in the final – against Spain last month.

Cristiano Ronaldo’s return to the Premier League was the headline news of the summer transfer window, the five-time Ballon d’Or winner re-signing for Manchester United.

Ronaldo’s return came more than a decade after his world-record departure to Real Madrid, establishing himself as the Spanish side’s record goalscorer before a goal-laden spell with Juventus.

No player scored more goals than the 36-year-old in Serie A last season as Ronaldo became the first player in history to win leading scorer accolades in England, Spain and Italy, whilst he has wasted little time in making an impression with seven goals in just nine starts across all competitions.

Ronaldo’s arrival undoubtedly impacts the style Ole Gunnar Solskjaer can implement at Old Trafford, but the Portugal captain’s ability to produce match-winning moments could prove pivotal across the course of the campaign.

The Ronaldo-Cavani partnership as a front two proved problematic for Spurs last weekend and could be an option for the Red Devils moving forward, the veteran duo remaining amongst the most clinical forwards in the Premier League.

Inter Milan’s financial situation led to the sale of Romelu Lukaku to Chelsea during the summer, sanctioning the £97.5m sale of a forward whose goals fired the Nerazzurri to Serie A title success last season.

Arriving to fill the sizeable void left by the Belgium international was Edin Dzeko, who arrived from divisional rivals Roma for a cut-price fee after scoring 119 goals across six seasons at the capital club.

Dzeko has made a fine start to his career at the San Siro with seven goals in just 11 league appearances, the Bosnia international having already equalled his entire Serie A haul from last season.

The 35-year-old’s game has never relied on pace and the veteran remains as instinctive as ever around the penalty area, emerging as a significant player in a new-look side under Simeone Inzaghi.

Jamie Vardy has enjoyed the best football of his career in his thirties, with the Leicester forward now rapidly closing in on Ian Wright’s record for the most Premier League goals scored over the age of 30.

Leicester’s signing of Patson Daka during the summer and Kelechi Iheanacho’s improvement had threatened Vardy’s status as undisputed first choice in Brendan Rodgers’ side, but the evergreen Foxes’ forward has began the season in clinical form.

Despite the Foxes’ struggle for consistency, the 34-year-old has scored seven goals in 10 appearances with only Mohamed Salah having scored more in the race for the Premier League’s Golden Boot.

Jamie Vardy has scored 47% of Leicester City’s goals in the Premier League this season, no player has scored a higher percentage of their team’s goals.

Having yet another excellent season. 🧨 pic.twitter.com/gJpwe6h8f1

Vardy has evolved his game into the twilight of his career with his movement as intelligent as ever, ghosting behind defences and remained razor-sharp when opportunities arise.

Vardy’s final seasons could prove crucial to the development of the promising Daka, a 23-year-old who shares similar traits to a footballer who has cemented his Leicester legend in recent campaigns.