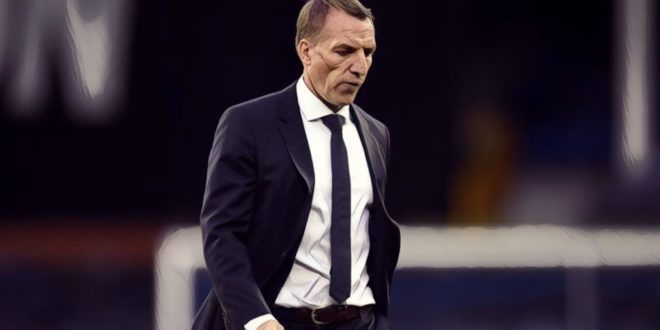 Brendan Rodgers is judged unfairly in English football. After bringing Swansea City to the Premier League and leading them to survival, he brought Liverpool on the brink of their first Premier League title before leading a stylistic revolution at Celtic that saw them dominate Scottish football with an attractive, progressive style of football.

Now at Leicester City, the Northern Irish manager has led a young, inexperienced side to European football for the first time since their sensational title triumph in 2016.

You wouldn’t know he’s been such a successful coach, though, if you listened to the majority of English football fans. Ever since his Liverpool side choked a five-point lead at the top of the table with just three games remaining during the 2013/14 season, he’s earned the perennial title of a bottle job. His speaking style to the media, littered with exaggerated cliches, hasn’t helped his public profile. Having lost the opportunity to secure Champions League football for the Foxes on the final day of the season, Rodgers’ reputation in English football has been affirmed once again.

Leicester City have undoubtedly been poor during the second half of the season – particularly after the restart. The nine games since lockdown have yielded four losses for the Foxes; they suffered as many in the first 19 games of the season. However, Leicester’s drop off is not explained by ambiguous accusations that Rodgers and his teams choke in high-pressure situations.

In fact, one could construe Leicester’s recent run of form to be a regression to the mean rather than a true drop off. The King Power outfit massively outperformed their expected goals tally during the first half of the season, meaning they were scoring an unsustainable number of goals based on the quality of the chances they created.

Even so, Leicester’s form of late has been mid-table at best and is certainly not indicative of their quality. Injuries have played a major role in that. The Foxes have been without first-choice right-back Ricardo Pereira and James Maddison since the start of the restart, while Ben Chilwell has also missed a number of games. Wilfred Ndidi, while not injured during the restart, has struggled somewhat in his recovery from a knee injury that kept him out at the turn of the new year.

The Nigerian’s slow recovery has arguably been even more damaging to Leciester than their actual injuries. The Foxes have been much more susceptible to quick counter-attacks than before, largely due to Ndidi’s inability to cover the space behind the Leicester press with the same efficacy as before. His performance against Manchester United on the final day was promising and hints that his blip in form is temporary.

Maddison has been Leciester’s primary creative outlet, dropping in between the lines and drifting wide to spread the play, supply Jamie Vardy with intelligent through-balls, and creating space himself for goal-scoring opportunities. The absence of the mercurial Englishman has left Leciester somewhat ponderous in the final third and more reliant on creativity from out wide.

Pereira and Chilwell give Leicester a degree of dynamism in wide areas that they otherwise lack, allowing them to stretch opposing defences and create gaps in between the lines for their attackers to exploit. Both are solid defensive presences and play an important role in Leciester’s high press.

James Justin is a promising player but lacks the all-round ability of his Portuguese counterpart, while the likes of Luke Thomas and Marc Albrighton are not natural replacements for Chilwell positionally. Without Pereira and Chilwell, teams were more capable of defending narrowly and compactly, ceding the wide areas to clog up the centre.

Such adaptation from the opposition has been one of the more under-discussed elements of Leicester’s recent form. Rodgers has a reputation for favouring a possession-based style of football, and Leicester are undoubtedly more inclined to rotate possession than they were under Claude Puel and Claudio Ranieri. However, Leicester are still at their best in attacking transition, using the passing of Youri Tielemans and Maddison and the pace of Harvey Barnes and Jamie Vardy to tear apart opposition defences on the break.

As the season came to a close, teams began to adapt to that and sat deeper against Leicester, as seen by their opponent’s PPDA. PPDA (Passes Allowed Per Defensive Action) is a statistic that measures the pressure that the defending team puts on the opposition players when they are in possession of the ball. The lower the number, the higher the degree of opposition pressing and vice versa.

In their eight losses before the restart, the average PPDA of Leciester’s opposition was 8.66, indicating that Leicester were losing to teams that were pressing relatively aggressively. This makes sense given that they suffered four defeats to Manchester City and Liverpool and one to Manchester United, three teams who all employ a high press to varying degrees.

Since the restart, though, the average PPDA of Leciester’s opposition was 15.84, indicating that teams were more willing to sit off and remain compact. This was most clear in their 3-0 defeat to Jose Mourinho’s Tottenham Hotspur, where Spurs were content to sit deep and hit Leicester on the counter rather than allow gaps to appear for the Foxes to exploit in transition. Injuries to the fullbacks and Maddison no doubt exacerbated Leciester’s difficulties in unlocking deep defensive blocks, but it also shows how other teams figured out ways to nullify their strengths.

Beyond the opposition, Leicester had their own tactical issues due to a lack of consistency in formation. In their four losses since the restart, Rodgers utilized four different formations: their usual 4-1-4-1, a 3-4-1-2, a 3-4-3, and a 3-5-2. The move to a back three was probably instructed by injuries, but Rodgers could have surely settled on one system rather than using three different versions of a back three. It deprives the Foxes of their usual rhythm with the ball and prevented them from pressing as effectively as they usually do.

Tactics are not the only factor in Leciester’s drop off. The squad is fairly inexperienced, and it wouldn’t help that two of their most experienced players in Jonny Evans and Kasper Schmeichel had torrid ends to their campaigns. They also lack the necessary depth to deal with injuries to key players, something that they will surely look to address during the window.

However badly it ended, though, Leicester has unquestionably had an impressive season. Rodgers has created a vibrant, young, attack-minded team that has upset the usual hegemony of the big six. But if their post-lockdown performances have shown them anything, it’s that there are still improvements to be made should they wish to be among the big players in English football once again next season.