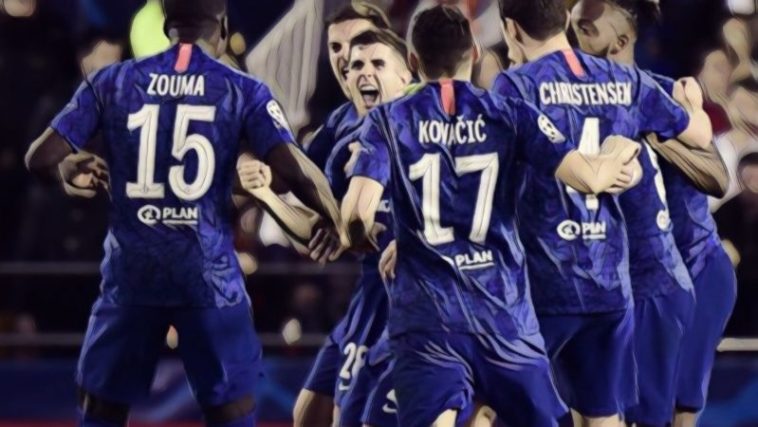 With the departure of manager Maurizio Sarri, star player Eden Hazard, and a transfer ban, few would have predicted that Chelsea fans would have much to smile about in the 2019/20 season.

Yet as their recent 2-2- draw with Valencia in the Champions League showed, the Blues have plenty to be excited about under the tutelage of club legend Frank Lampard.

While some raised eyebrows about the Englishman’s lack of managerial experience when he was appointed, his commitment to playing young players and pressing, possession-based attacking football has injected new life into what was meant to be a dead season for Chelsea.

The Blues primarily set up in a 4-3-3, but Lampard has been tactically flexible and also used a 4-2-3-1 and 3-4-3. In possession, Chelsea build from the back patiently and methodically, which Jorginho sitting just ahead of the centre backs to form a compact passing triangle to circulate possession and invite the opposition to press high.

Simultaneously, striker Tammy Abraham will look to push up in order to stretch the opposition defence and pin them back. By doing this, Chelsea encourage the opposition’s attacking and defensive lines to move in opposite directions, allowing space to open up in the middle of the pitch for Chelsea’s wide attackers and more advanced central midfielders to exploit.

Once such space is created, Chelsea play quicker and more vertically. The fullbacks push up whilst the wingers tuck inside and the advanced midfielders move into the half-spaces, enabling passing triangles to form that allow the team to move the ball forward effectively.

Unlike Chelsea strikers before him, Abraham is not tasked with dropping off to link play and instead remains the focal point of the attack. His aerial presence enables the fullbacks to target him with crosses while his pace and movement enable the midfielders and wide attackers to find him with angled through balls.

Defensively, Lampard encourages his team to press high and aggressively. They look to press in numbers, with Jorginho supporting from the back and the advanced midfielders, wingers, and striker engaging in the press assertively.

Similar to Liverpool, Chelsea look to create counter-attacking opportunities through their pressing, harrowing the opposition to force turnovers in key areas and initiating their own attacks as soon as possible.

This undoubtedly has its benefits, as it can force the opposition into aimless long balls which simply hands the initiative back to the Blues. However, on the other hand, many of Chelsea’s defensive issues stem from their pressing approach.

With all of their attackers and midfielders pushing so high up the pitch, Chelsea often lack compactness out of possession and are consequently susceptible to counterattacks. Most teams who press in the manner Chelsea do play with a higher line to alleviate this issue and ensure that there is never too much space between the attacking, midfield, and defensive lines.

However, Chelsea have found it difficult to execute the high line effectively. The defenders either fail to position themselves sufficiently high enough in relation to the rest of the team or end up with some defenders further back than others, leading to teams bypassing the offside trap. This could also stem from a lack of continuity in the Chelsea backline.

Neither Emerson Palmieri or Marcos Alonso have cemented themselves as the starting left-back, and club captain Cesar Azpilicueta has faced stern competition from the talented Reece James for the right-back role. At centre-back, Kurt Zouma is returning from loan spells at Stoke City and Everton, Andres Christensen is coming off a season with limited game time, and Fikayo Tomori has returned from a season with Lampard at Derby County, meaning neither have much experience playing with each other or the rest of the Chelsea squad.

With more game time as a unit, Chelsea’s defenders will likely implement the high line to greater effect, although Lampard may benefit from tinkering with his defensive selections less and settling on a preferred back four.

In the meantime, Lampard has tried to compensate for the team’s lack of compactness by using James and Tomori more frequently in order to give the backline greater athleticism. With opposition teams frequently finding space to run at the Chelsea back four, having defenders who are quick enough to cover the space behind the defensive line is useful.

This is just one of the ways in which Lampard’s commitment to playing youth serves a greater purpose than dealing with the club’s transfer ban or pleasing fans. Any pressing team requires players with supreme levels of energy and mobility, and in playing the likes of James, Tomori, Abraham, Christian Pulisic, Mason Mount, and Callum Hudson-Odoi, Lampard ensures that his team has the necessary attributes to execute his tactical style. For Lampard, youth development is not merely reading a list of the minutes given to different academy players, but a tactical necessity.

Apart from youth players, Lampard has also effectively utilized other players in his squad. Jorginho has excelled as a deep-lying playmaker, as his composure, control, and both short and long passing enables Chelsea to build from the back and transition into the attacking phase effectively.

Like his predecessor Maurizio Sarri, Lampard has used Kante in a more advanced box-to-box role in the midfield and has done so to great success. The Frenchman has been afforded greater license in the attacking phase, indicated by the fact that he plays 32% of his passes forward, a sizeable rise of 11% from the previous campaign.

Kante is free to make late runs into the box to pose as a goal-scoring threat while also playing an important role in Chelsea’s ability to move the ball into the final third, frequently showing for the ball in the right half-space to move it on towards an advancing full-back.

However, this greater offensive responsibility hasn’t detracted from his defensive performances. Kante averages two tackles and 2.5 interceptions per 90, demonstrating that his defensive work is not sacrificed in his new role, but simply performed further up the pitch.

Mateo Kovacic has also shined in a similar box-to-box role, where his ball-carrying ability can be used to either penetrate the opposition midfield and defence or draw players towards him and open up space for others.

In attack, Willian has been productive on the right-hand side, where his movement, shooting, and passing combined with work rate off the ball making him an ideal attacker for Lampard’s side. He also remains one of the few experienced attacking players who regularly receives game time, and no doubt serves as a leader and mentor for the less experienced players.

Lampard has been intelligent in the way he has gone about his first season in Premier League management; implementing a style of play that suits his team well, changing formations and selections when necessary, and integrating talented young players while also using experienced squad members effectively.

Only time will tell if he can develop his talented side and address their weaknesses, but few could have imagined a better beginning to Frank Lampard’s managerial career at Chelsea.

Five players who smashed it on Champions League Matchday 5