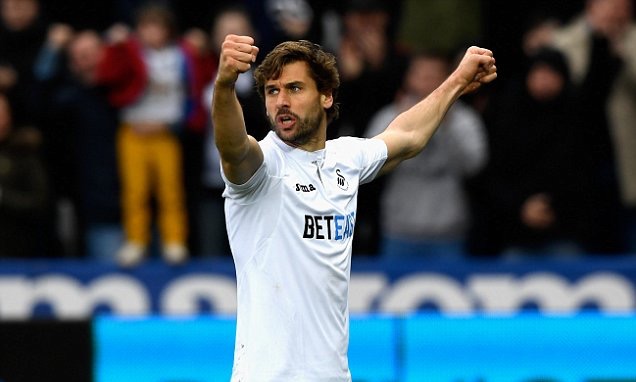 Burnley’s embarrassing away form continued today, as they slumped to a 3-2 defeat at the hands of a rejuvenated Swansea side, despite holding a lead.

It was a day to forget for Referee Anthony Taylor who got two of the games biggest calls wrong, first of all the Burnley penalty and then the Swansea winner.

It didn’t take long for Swansea to assert themselves on the game and they almost edged themselves in front on 10 minutes. Defender Alfie Mawson rattled the bar, before his follow up effort came crashing back off the post.

Burnley didn’t take heed of their warning and two minutes later they were behind.

Some good work from Leroy Fer down the right hand side enabled him to swing in a rather hopeful cross that Fernando Llorente turned into a great one. His powering header flew past stand in ‘keeper, Paul Robinson.

The Clarets almost struck back immediately through Jeff Hendrick, but his low, powerful, drive was gathered by Lucasz Fabianski.

Then came the controversy. On 19 minutes, Anthony Taylor awarded a penalty to the visitors after he adjudged Mawson to have handled the ball. Replays however showed it was in fact Burnley’s Sam Vokes who had handled the ball. The incorrect decision stood, and Andre Gray coolly slotted home from 12 yards to get the Clarets back on level terms.

Luciano Narsingh continued to cause problems down the right wing for Stephen Ward, who had a torrid day, as the Burnley box continued to be bombarded with crosses.

Swansea were definitely the team in the ascendancy as half time loomed, but they failed to capitalise on their dominance, despite having a few half chances courtesy of Gylfi Sigurdsson and the troublesome Llorente.

The Swans started the second half as they finished the first – fast. Again, crosses into the box tormented Burnley and they were nearly caught cold when Martin Olsson’s cross was glanced across goal by Llorente. The Spaniards effort drifted agonisingly wide of the post from a Swansea perspective.

It was Burnley who would take a surprise lead on 61 minutes. A hopeful long ball from Matt Lowton was flicked on by Vokes. Andre Gray took it down, swivelled and fired home past Fabianski and suddenly there was belief that the elusive away win would come in South Wales.

However, that belief was short lived as Swansea hit back eight minutes later. A deft flick from Sigurdsson set Olsson away and his powerful left footed strike flew past Robinson and into the roof of the net.

The Swans continued to bear down on the Burnley goal and as the crosses continued to rain into the Clarets box, Llorente again went close with a header, but he failed to hit the target.

The game was decided on 92 minutes, when Tom Carroll was allowed too much time and space to swing in a scintillating ball and the imposing figure of Llorente rose highest at the back post to head home, albeit he fouled Ben Mee.

Jordan Ayew came close to sealing it for Swansea just a minute later, but Paul Robinson was equal to it and the game ended 3-2 in the Swans favour.

A word on the referee. After getting the penalty call so drastically wrong early on, it seemed like he took up the ‘evening up process’ throughout the game and any 50/50 decisions went in the favour of the home side.

The Swansea winner, despite being a clear foul on Ben Mee, you felt that the goal was never going to be disallowed.

However Burnley can’t point fingers at the officials about the outcome of this one. Their performance was woeful.

Overall, for Swansea, it was a great win and they thoroughly deserved it on the day. They played some great football and exploited the weaknesses of Burnley, which is clearly out wide.

In Fernando Llorente they have a clinical striker and I have no doubt that they will be a Premier League side next season and in actual fact, I think they will finish above Burnley come May.

For the Clarets, a disappointing day. To be ahead with 2o minutes left to play  and then to lose, is poor and a chunk of the blame for me has to go to the manager.

At 2-1, he should have adopted his 4-5-1 system, but instead, he waited until it went to 2-2 and they there wasn’t really much point in changing the system.

Swansea’s game plan was to bombard the Burnley box with crosses and from minute 1 to minute 90, that’s what they did. Burnley never learned and they persisted to allow crosses to come in and eventually they were punished.

We are looking for a regular writer to write about Swansea City. If you are interested in joining our rapidly expanding team, please get in touch!